Altria, Amazon, Capital One and Dominion all signed the letter.

“Because many LGBTQ and non-LGBTQ workers prefer to live and work in communities with nondiscrimination protections, such a law will give Virginia’s employees tangible advantages in recruitment and retention,” reads the letter released by the Virginia Values Coalition, a statewide group pushing for passage of the Virginia Values Act, which would prohibit LGBTQ discrimination in Virginia.

“Business leaders know that a welcoming Virginia is crucial to their economic competitiveness,” said Kasey Suffredini, Freedom for All Americans CEO and national campaign director. “Nondiscrimination protections for LGBTQ Virginians and visitors will make it easier for businesses to recruit talented workers, to expand investments in the state, and to attract tourism business.”

On Jan. 22, The Human Rights Campaign — an LGBTQ advocacy and political lobbying organization — released a list of employers who also signed the letter addressed to Filler-Corn and Saslaw, denoting them as some of the “Best Places to Work for LGBTQ Equality.” The crossover companies (companies that both signed the letter and were recognized as a best place to work for LGBTQ equality) included Altria, Capital One, Dominion Energy, Hilton and Nestlé USA Inc. The index was determined via a survey on LGBTQ-friendly practices and policies including nondiscrimination policies, employment benefits, supporting an inclusive culture and corporate social responsibility.

“Virginians and businesses agree — it is past time for LGBTQ people in the commonwealth to have comprehensive nondiscrimination protections,” HRC President Alphonso David said in a statement. “These protections are good for business, good for tourism, good for the economy, and most importantly, vital for the 250,000+ LGBTQ adults living in Virginia. It’s heartening to see so many Virginia businesses publicly support these protections and push for equality for all.”

Virginia will be the first Southern state to pass nondiscrimination protections for LGBTQ residents. 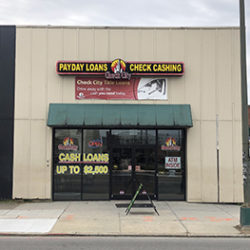 An estimated 12 million Americans take out payday loans each year.