Some localities have record years while others battle high vacancy rates

Northern Virginia localities ended 2015 with mixed results, with some reporting record economic growth while others had marginal gains.

Loudoun County was one of the region’s big winners. “We have more overall business investment — more than $1.4 billion in 2015 — than anywhere else in Virginia,” says Buddy Rizer, executive director of the county’s department of economic development. “We have a lot to be proud of.”

Last year, the county recruited or retained 61 companies. They are expected to create or retain 2,757 jobs and fill more than 3.6 million square feet of commercial real estate space.

Almost one-fifth of the county’s workforce is employed in the high-tech industry. Loudoun continues to have the largest concentration of data centers in the commonwealth. Carfax, which produces vehicle history reports, said last year that it will invest $10.8 million to upgrade its data center operation in Loudoun.

One of Loudoun’s biggest wins involved Geico’s decision to spend nearly $6 million to build a national training center in the county. The 32,675-square-foot building, which opened in October, replaces the company’s previous training facility in Tysons. Geico is expected to create about 35 jobs in Loudoun within five years. The facility will train about 35,000 Geico claims adjusters from around the country each year.

Loudoun also continues to see growth in all of its industry targets. The county’s mix of businesses includes health analytics, personalized medicine, aviation and aerospace. “The momentum has given us confidence going forward,” Rizer says. “What makes me most excited is that the numbers are amazing, especially when you look at new investments, new jobs and startups. Loudoun County is really happening.”

Because of its diversity, the county is “less dependent on the federal government than any jurisdiction in Northern Virginia,” Rizer says.

Fairfax County had a transitional year in 2015, moving from marginal growth to an upswing in jobs and more companies looking at the county.

The growth of office space around the county’s five new Metro stations — four in Tysons and one in Reston — led to increased vacancy rates. “We have seen a great deal of high-rise construction around those stations,” says Gerald L. Gordon, president and CEO of the Fairfax County Economic Development Authority. “That happened at a time when we already had a lot of vacant space.

We now have about 20 million square feet vacant. We have a lot of space yet to fill. That has been our biggest challenge.” 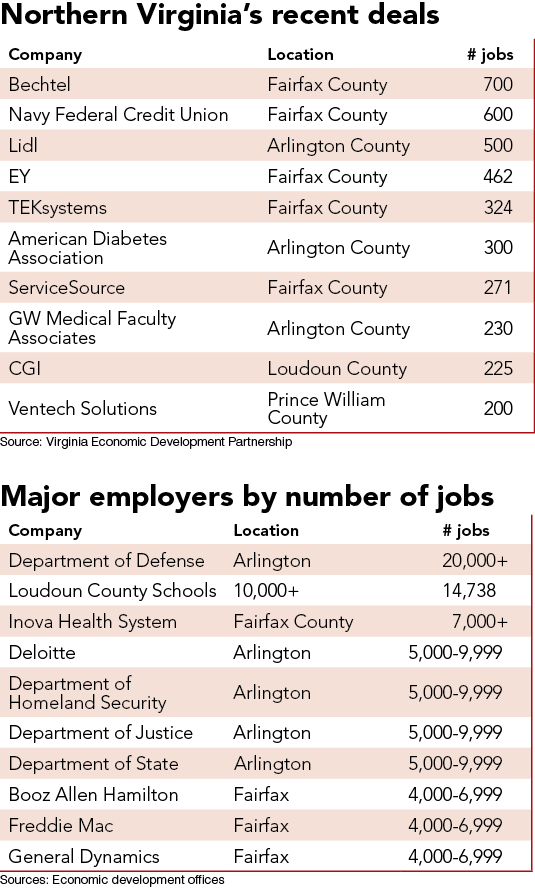 One of the county’s high points occurred when Inova Health System took over the Exxon Mobil campus in the Merrifield area to house the Inova Center for Personalized Health. “This campus will make Fairfax County a hub for world-class research and the commercialization of ground-breaking discoveries,” Gordon says. “New companies will grow as a result, and more world-class researchers and businesses will want to be here.”

The new facility helps diversify the Fairfax economy, something the economic development authority has been working toward for several years. “This is the magnet we needed to grow the translational medicine industry in Fairfax,” Gordon says. “It will attract worldwide attention.”

Last year Fairfax heightened its focus on new industries such as translational medicine, cybersecurity, cloud computing and data analytics. “We have created new positions to pursue those businesses,” Gordon says.

Arlington has started to stabilize its vacancy rate, which dipped at the end of the third quarter last year. It was the first time the rate has dropped appreciably in more than five years. The current rate sits at 21 percent. “Companies are starting to move back to Arlington and backfill some of this space,” says Christina Winn, director of the business investment group for Arlington Economic Development.

Through October the county closed 30 deals, which are expected to create or retain nearly 3,000 jobs and more than 800,000 square feet of office space. One of its biggest wins was an announcement from Lidl, a Germany-based discount supermarket chain, that will invest $77 million in establishing its U.S. corporate headquarters in the county (see story on Page 22).

The Arlington County Board also approved plans to transform Ballston Mall into Ballston Quarter with shops and a new, mixed-use residential building. The county will invest approximately $55.5 million in the $317 million project in a public/private partnership with Ohio-based Forest City Enterprises, owner of the Ballston Quarter sites.

Other wins involved GW Medical Faculty Associates, the largest independent physician network in the Washington, D.C., area with more than 750 health-care providers. It is relocating one of its offices from Washington to Arlington, occupying 50,000 square feet of office space. It is expected to create more than 200 jobs in its first year at the new site.

The American Diabetes Association moved its headquarters back to Arlington’s Crystal City from Alexandria, taking 78,000 square feet of space for its 300 employees. Also moving into Crystal City was the global startup incubator and seed fund 1776.

The 13 projects closed by the department represented $666 million in capital investment and the promise of 480 new jobs.

“Prince William County is hot,” said Jeff Kaczmarek, executive director of the department of economic development. “The county’s growth is owed in part to its strategic location and excellent competitive edge. We have a ready supply of highly educated young professionals, affordable and available land and competitive labor costs, all of which result in a strong value proposition within the Greater Washington, D.C., metropolitan area.”

Ventech Solutions Inc. selected Prince William County as the site for its regional innovation, operations and engineering (IOE) center. The IT company plans to invest more than $1.5 million, creating 200 jobs with an average salary of $80,000 a year.

RiVidium Inc., an information technology and human resources support business, expanded in the county, doubling its workforce from 30 to 70 employees and adding 1,500 square feet.
In addition, the county elevated its branding and exposure internationally by hosting the Quicken Loans PGA Tour at Robert Trent Jones Golf Club in Gainesville. Twenty-one million viewers tuned in to watch the tournament.