Home News Missing from the map?

Missing from the map?

Leaders debate whether to rebrand the region

Thirty-five years after Southeastern Virginia branded itself Hampton Roads, the rallying cry has gone out for a new moniker that will put the region front and center on maps as well as the short lists of business prospects.

“Subject-matter experts in the tourism industry and economic development professionals are telling us the name Hampton Roads is not working,” says Bryan K. Stephens, president and CEO of the Hampton Roads Chamber. “It doesn’t resonate with people outside the region. You have to explain what Hampton Roads is.”

Stephens and other local leaders favor going back to the drawing board and rebranding the region. “If something is not working, you should probably change it,” he says.

But what should the region call itself? Coastal Virginia draws the support of tourism officials, who say the name aptly describes the region’s location. (Hampton Roads, on the other hand, denotes the channel through which the waters of the James, Nansemond and Elizabeth rivers flow into the Chesapeake Bay and the Atlantic Ocean.) Other leaders back Southeastern Virginia as the region’s moniker, while some business leaders prefer Greater Norfolk Region, an identifier that calls to mind the area’s links to commerce, shipping and the military. 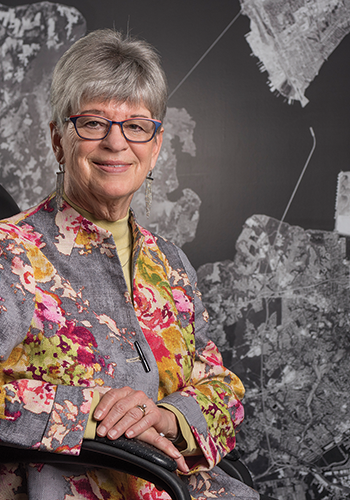 “It should be Norfolk,” says Deborah K. Stearns, senior vice president of JLL, a global real estate services firm. “We need an identity that people can find on a map. Coastal Virginia is a great tourism label, but it’s not on a map, and it doesn’t say business.”
Stearns recalls the time a New Jersey-based JLL colleague could not determine the location of Hampton Roads. “He was looking for a city on the map,” she adds. “That happens a lot. Having a name that can be found would help our economic strategy.”

While Stearns contends that Norfolk is the most logical catchall name for the region, she’s not opposed to adding Virginia Beach to the label. “Norfolk-Virginia Beach would also be beneficial, but Virginia Beach-Norfolk-Newport News is way too long.”

Considering that the 17 localities that make up Hampton Roads often have jockeyed for position, would designating the entire region “Norfolk” diminish those local identities and hamper future collaborative efforts?

Stearns answers by pointing to New York City’s five boroughs. They each have a strong name identity and culture, but together, all are marketed as New York. She believes the same scenario could play out locally. “Hampton Roads cities would not merge or give up their individual identities.”

Improving transportation
Stephens believes revamping the regional brand could be a litmus test for future collaborative efforts among Hampton Roads cities and counties. “We need a cultural change in Hampton Roads,” he says. “Sometimes our own individual bias is so ingrained that it’s hard to understand the collective impact when the entire region comes together. We have to understand that we live, work and raise our families in the region and not just one municipality.” 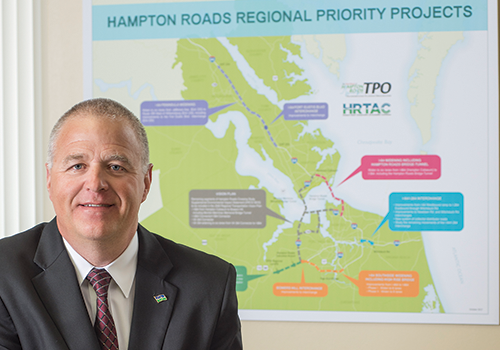 Many, if not most, Hampton Roads residents live in one locality, work in another and shop or dine in yet another, often all on the same day. Traveling throughout the region’s network of highways, bridges and tunnels long has been a source of frustration. As multiple infrastructure projects come on line, however, the ability to get around is steadily improving. “We are building more transportation projects in the next six years than we have in three decades,” says Robert Crum, executive director of the Hampton Roads Transportation Planning Organization.

Those projects include widening 21 miles of Interstate 64 on the Peninsula, with the first segment completed late last year. Phase two is scheduled to wrap up in spring 2019, and the third phase is slated for completion in summer 2021. On the Southside, work is underway to improve the I-64/I-264 interchange, the second busiest in Virginia, while construction to widen nearly nine miles of I-64 in Chesapeake is set to begin in June.

In addition, a new Hampton Roads crossing is just one aspect of plans to expand the Hampton Roads Bridge-Tunnel (HRBT). The largest road project the state has ever tackled, the endeavor covers a 12-mile corridor from I-664 on the Peninsula to I-564 in Norfolk, one of the region’s most congested areas. “It’s the key project to help strengthen connections between the Southside and the Peninsula,” Crum says. “We’re really excited about that.” The construction contract is set to be awarded early next year, with a targeted completion date of 2024.

Funding for the transportation projects has bolstered regional collaborations. “The 17 localities identified projects that are the most beneficial to the region and its residents,” Crum says. “It’s a model for regional cooperation.”

Reinvent Hampton Roads
James K. Spore retired as Virginia Beach’s city manager in 2015 and immediately became president and CEO of Reinvent Hampton Roads, an initiative that supports traditional business sectors while attracting new employers, entrepreneurs and industries to the region. “There’s a real difference of opinion in terms of what’s the best way to go,” he says of rebranding Hampton Roads. “That’s something that will take real time and energy to be pursued.”

In the meantime, Spore believes Hampton Roads must market itself more effectively. “We have enormous assets in this region, but we need to do a better job of marketing what we’ve got.”

Reinvent Hampton Roads is targeting certain industries — such as cybersecurity, tourism, advanced manufacturing and port logistics — that could bring more higher-paying jobs to the region. “Traditionally, Hampton Roads has had three major industries — military/defense, the port and tourism,” Spore notes. “We want to add that fourth leg of the table and grow startup jobs.”

Promoting the region’s entrepreneurial spirit is the mission of 757 Angels. Since 2015, the angel investment network of 120 Hampton Roads business and community leaders has injected more than $22 million of capital into 14 companies. 757 Angels is one of the fastest-growing and largest networks of its kind in the country, says Monique Adams, its executive director. “Great momentum is building in Hampton Roads’ entrepreneurial ecosystem, and 757 Angels is a key player,” she adds. “As companies grow, jobs will be created, and the economy will become more diversified.”

Diversification is critical for a region whose economy stalled while the rest of the nation continued to recover from the Great Recession. Reinvent Hampton Roads and 757 Angels advocate diversity through entrepreneurial ventures. “We want Hampton Roads to be known as an entrepreneurial, innovative region that encourages startups,” Spore says.

Local startups often evolve from work at established pursuits. For example, Reinvent Hampton Roads funds an entrepreneur-in-residence at NASA Langley Research Center who works with scientists to parlay their research into marketable businesses.

Reinvent Hampton Roads also has partnered with Martinsville-based consulting firm GENEDGE on Industry Cluster Scale-Up, a program designed to accelerate the growth of local small and midsize businesses. “We’re emphasizing advanced manufacturing and cybersecurity,” Spore says. “Those are two we think have the highest potential.”

With another almost $1.3 million in GO Virginia funding, ODU also is developing the Virginia Digital Shipbuilding Workforce Program. The program will train about 8,500 craftsmen, engineers, designers and IT professionals to work in digital manufacturing while supporting the region’s advanced-manufacturing and shipbuilding industries.

“We’re really excited about both of these programs,” Spore says. “They are going to be state-of-the-art national models.”

Local colleges and universities also will play a role in sustaining Hampton Roads’ tourism industry. Demand for tourism workers spiked with the recent openings of of The Main hotel and the revitalized Waterside District in downtown Norfolk and Virginia Beach’s refurbished Cavalier Hotel. “With major new hospitality facilities opening, it’s been difficult to find qualified workers to fill those jobs,” Spore says. “We need more and better-trained folks.”