Medical breakthrough with a hitch

FDA approves new treatment, but is the proposed Medicare payment too slow?

For the Charlottesville-based Focused Ultrasound Foundation, this is a big win. In July, the U.S. Food and Drug Administration gave its approval to a focused ultrasound device to treat essential tremor, a condition that affects several million people in the U.S. The tremor can affect any part of the body but often occurs in the hands, making many everyday tasks difficult to perform.

The foundation promotes the adoption of focused ultrasound technology in a wide range of treatments. Focused ultrasound uses magnetic resonance imaging (MRI) to aim the ultrasound waves. They create enough heat to destroy the brain tissue causing the tremor. That means no surgery is involved, and patients are awake and responsive during the treatment. 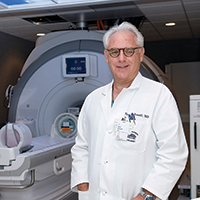 The expanded use of focused ultrasound is an important development. “It opens the door for [treating] Parkinson’s disease and epilepsy and all those other” conditions related to brain function, says Dr. Neal Kassell, the founder and chairman of the foundation and a professor of neurosurgery at the University of Virginia.

FDA approval of the essential tremor treatment “validates the technology for all the other conditions,” Kassell says. “Because it treats a condition deep in the brain, that makes it much more likely to work in the rest of the body.”

The FDA’s action is a big deal, and the next step might be even more important. The Center for Medicare and Medicaid Services (CMS) is now deciding how much the federal government is willing to pay for the treatment. CMS’ proposed Medicare payment — about $5,800 per treatment — isn’t enough to encourage health-care providers to start using the technology, its supporters say.

“They approved it at a level that’s too low,” Kassell says.  “From the perspective of the treating physicians and the facilities, it’s not enough.”
Pivotal payment

Medicare payment is a critical step in the adaption of this newly approved device and in the effort to increase the use of focused ultrasound. Medicare payment has a big influence on what commercial insurers will pay. Plus, the majority of patients who might need this treatment are old enough to be eligible for Medicare. So whatever payment CMS sets will likely be what most providers will get.

In a sense the payment issue is a matter of bad timing. CMS payment review took place shortly after FDA approval was announced. Kassell and others say CMS is somewhat hamstrung because the focused ultrasound treatment hasn’t been used enough to show what its actual costs are. “It’s not like CMS is doing anything wrong,” Kassell says. “If you’re in their shoes, they’re trying to save taxpayers’ money” by taking a conservative approach to deciding reimbursements.

The FDA-approved focus ultrasound device used in the essential tremor treatment is called the ExAblate Neuro. It is produced by Israel-based InSightec, which has a U.S. office in Dallas. Dee Kolanek, Insightec’s vice president of reimbursement, agrees that the CMS payment decision could at the very least delay implementation of the new device “because hospitals may not invest in the technology,” she says. That investment could be between $1.5 million and $3 million.

In addition to the equipment costs, there is the price of having a trained physician and the support staff needed. Even with the FDA’s approval, getting the system up and running soon will be challenging. “It’s a huge capital expenditure,” she says.

Kolanek says that, while Insightec is disappointed with CMS’ initial $5,800 proposal, the company understands why the agency settled on that figure. “There’s no way to figure a cost without claims data,” and CMS didn’t have enough data to go on, she says.

Collecting enough data
If CMS approved a higher payment, Kolanek and Kassell say the few health-care providers with the ExAblate Neuro system would at least be encouraged to keep using it. After a couple of years of use treating a few hundred patients, CMS could have enough data to more accurately set the reimbursement. Only about a half-dozen hospitals now have the ExAblate Neuro system, so it wouldn’t cost a lot of taxpayer dollars to fund treatments at a higher rate.

Kolanek says Insightec is pursuing FDA approval for other uses for its focused ultrasound technology. “We have clinical trials going right now for many other indications including Parkinson’s Disease …  and we have a clinical trial for prostate cancer,” she says.

CMS accepted public comments until Sept. 6 on its reimbursement proposal for the essential tremor treatment. The feedback included comments from Dr. Jeffrey Elias, a neurosurgeon at the University of Virginia Health System, one of six clinical trial sites for the treatment. In an August letter to CMS, he said more than 200 people called his office in the days after the FDA approval. What’s more, U.Va. already had a list of 3,000 people interested in getting the focused ultrasound treatment, Elias said.

U.Va. invested $8 million in building a focused ultrasound center five years ago to support testing, he says. “I am hopeful that focused ultrasound will eventually be proven to significantly help with all kinds of conditions of the brain,” he wrote.

Now, proponents of this new treatment must wait to see if CMS changes its proposed reimbursement. “We really have no idea what decision is going to be made and what they’re going to do until the decision is posted,” Kolanek says. A decision is expected in November. “What we would hate for Medicare to do is finalize the hospital payment as is, which could have a significantly adverse impact on the development of this technology… because it can help many people.”