Although Hampton Roads health care systems conducted some significant business over the past year, the biggest news was a deal that didn’t happen.

Norfolk-based Sentara Healthcare’s plan to merge with North Carolina-based Cone Health, which was announced in August 2020 and would have created a 17-hospital system with a combined $11.5 billion in annual revenue, was called off in June.

“We realized that each of our communities and key stakeholders require support and commitments from our respective organizations that are better served by remaining independent,” Sentara and Cone Health said in a joint statement.

Health care systems are in better shape financially this year than in 2020, when Gov. Ralph Northam’s executive order prohibited nonemergency surgical procedures for several months. But at the same time, officials are fully aware of the possibility of future instability, even after COVID-19 vaccines have been broadly available.

This summer brought renewed concerns about increases in COVID hospitalizations as the highly contagious delta variant of the coronavirus spread primarily among unvaccinated people. Virginia’s COVID positivity rate jumped to 10% in late August, up from 1.5% in June.

“We are hopeful about the financial outlook for Sentara but understand that COVID-19 is with us for the long haul and has changed every aspect of the way we live, work and care for others,” former Sentara spokesperson Brittany Vajda said.

Newport News-based Riverside Health System modeled its 2021 budget after its 2019 plan, says CEO Bill Downey, although revenue is still not back to pre-pandemic levels. Meanwhile, Riverside has seen treatments and services return to close to normal activity this year.

Partnerships among hospital systems and universities continued over the past
12 months. The Hampton Roads Biomedical Research Consortium, a collaboration among Sentara, Old Dominion University and Eastern Virginia Medical School, launched in late 2020. Sentara also pledged $4 million toward the establishment of Virginia’s first school of public health, a joint initiative between EVMS, ODU and Norfolk State University. The schools signed a memorandum of understanding in August, solidifying plans for the school.

Sentara is among a group of 14 health care systems nationwide that formed a new company, Truveta, which will offer data insights for patient care, the systems, including Bon Secours, announced in February. Truveta is creating a data platform using artificial intelligence and machine learning that will let health care systems learn from one another and provide larger study samples than each could accomplish individually.

“From a business perspective, one of the important things is that we have great talent in the commonwealth,” Becky Sawyer, executive vice president and chief people officer for Sentara Healthcare, told Virginia Business in May. “The recruiting process is very expensive. It is much more cost-effective to pay a person a reasonable salary.” 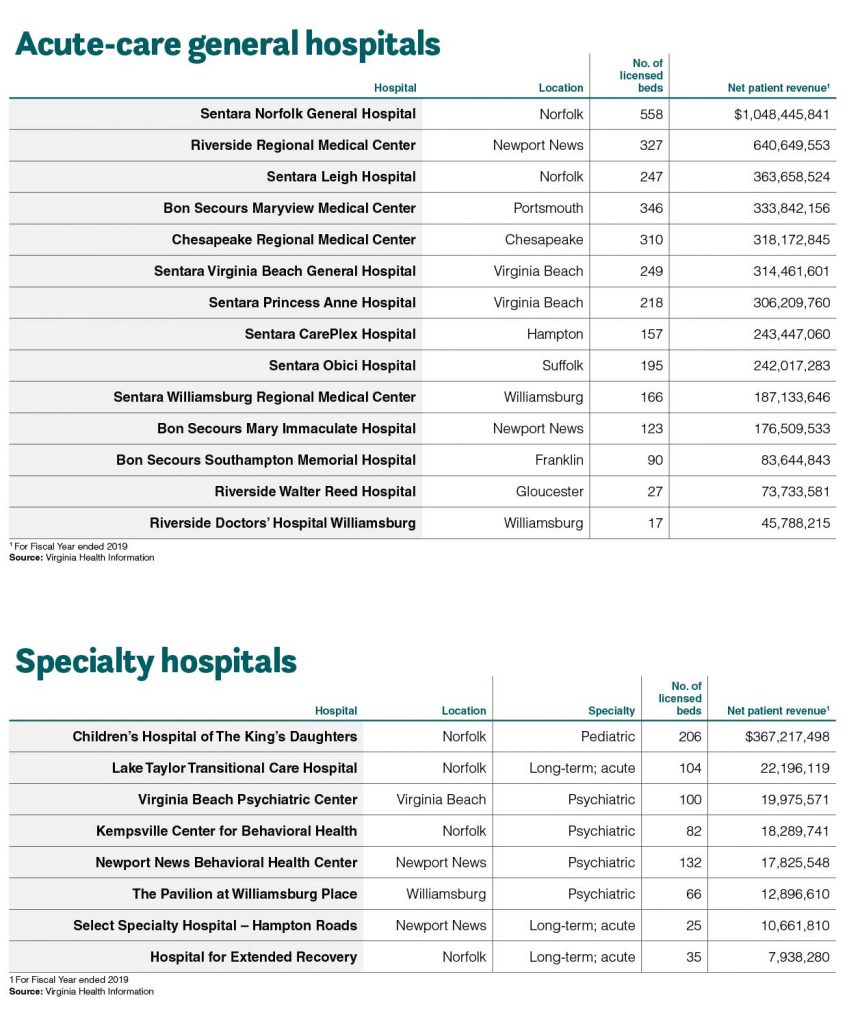