Former Virginia Gov. Terry McAuliffe, running for a second, nonconsecutive term, raised $4.1 million in the first quarter of the year, according to campaign finance reports filed Thursday, placing him well ahead of the other Democrats vying for the party’s nomination for governor.

Among Republican candidates, Glenn Youngkin has raised $7.65 million, with $3.6 million cash on hand between his campaign committee and the Virginia Wins PAC. He has mostly self-funded his run since declaring his candidacy in January, having contributed $5.5 million to his campaign fund and $400,000 to his political action committee. He has raised $1.9 million in cash contributions of $100 or more, and raised a total of $7.65 million since January.

In second place is Pete Snyder, who — along with his wife, Burson — contributed $5.2 million to his campaign since January. He also has raised $1.5 million in cash contributions of $100 or more, creating a total campaign war chest of $6.8 million.

On Thursday evening, the Virginia Public Access Project, which provides financial and other information on Virginia candidates, began posting raw financial data turned in by candidates’ campaigns for the House of Delegates and statewide offices, including candidates for governor, lieutenant governor and attorney general.

The deadline to file reports to the State Board of Elections was midnight, and most candidates’ reports were not made public until early Friday.

McAuliffe, who has far exceeded fellow Democratic contenders in polls, was the only major gubernatorial candidate whose finance report was public on Thursday.

The Democratic field includes Lt. Gov. Justin Fairfax, state Sen. Jennifer McClellan, former Del. Jennifer Carroll Foy, Del. Lee Carter and McAuliffe. On the Republican side, state Sen. Amanda Chase, who entered the race more than a year ago, led earlier polls and fundraising but has now dropped to fourth in the field in cash on hand. She faces Del. Kirk Cox, the former House of Delegates speaker, and prominent businessmen Snyder and Youngkin.

As noted by McClellan’s campaign, candidates who serve in the General Assembly — including herself, Carter, Chase and Cox — were barred from fundraising during the 28-day regular session, putting them at a fundraising disadvantage versus candidates not holding office. McClellan announced earlier this week that her campaign has received nearly $1.5 million in pledged donations during April.

The major candidates reported the following totals of cash on hand as of March 31:

On May 8, the Republican Party of Virginia’s delegates will choose a candidate for governor through a party-run convention, while voters will choose the Democratic candidate on June 8 with a state-run primary election.

Former Roanoke Sheriff Octavia Johnson, who entered the race in March, retired Army Col. Sergio de la Peña and Peter Doran, a former think tank leader, make up the rest of the GOP gubernatorial field. Princess Blanding, an activist and the sister of Marcus-David Peters, a teacher who was shot and killed by Richmond police in 2018, is running as an independent for governor.

Attorney Gen. Mark Herring, running for a third term, has $1,388,234 in cash on hand, and Del. Jay Jones, a Democrat endorsed by Gov. Ralph Northam, reported a balance of $1,057,080. Among Republican candidates for attorney general, Del. Jason Miyares has a significant lead, with $429,461. His closest competitor is Jack White, who reported $97,467.

Among the large field of candidates for lieutenant governor, the following candidates have reported more than $100,000 in cash on hand:

Information on all statewide candidates is available here.

GOP gubernatorial candidate says chamber made defamatory statements about her 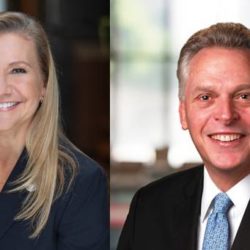