While it’s debatable whether Trump can personally take credit for saving the factory, annual defense spending has risen about 13% over the course of his administration, strengthening the fortunes of contractors such as Virginia-based General Dynamics, a Fortune 500 company that makes warships, combat vehicles and Gulfstream jets. (U.S. military spending still isn’t back to the levels seen during its 2009-11 boom years, however.)

The Joint Systems Manufacturing Center, also known as the Lima Army Tank Plant, is owned by the Army and run by General Dynamics Land Systems. The only factory making armored tanks in the United States, the Lima plant has faced an uncertain future in recent years. In 2015, following an urgent request from a bipartisan group of more than 170 congresspeople, President Barack Obama allocated $445 million to upgrade the M1 Abrams tank and sustain the Lima plant.

And two months before Trump’s 2019 visit, General Dynamics announced it had landed a $714 million contract with the Army to upgrade 174 tanks — on top of a 100-tank upgrade order it won in 2018.

Trump said he came to the plant to celebrate. “And the awesome M1 Abrams tank is once again thundering down the assembly line,” he said. “There’s nothing like it in the world.”

In the days surrounding Trump’s visit, General Dynamics stock hit all-time highs. Since the 2016 election, its share price has grown 9.1%, from $168.55 after Election Day to around $183 on Jan. 29, the day of its fourth-quarter and full-year financial results conference call.

Loren Thompson, chief operating officer of the Lexington Institute in Arlington, says the president wasn’t overselling — about his administration’s role in the plant’s comeback or the manufacturing standards held by General Dynamics.

“It’s one of the biggest aeronautical and defense companies in the world,” says Thompson, whose nonprofit think tank receives contributions from companies including General Dynamics, for whom he consults. “Its business jets are top of the line. Its submarines are unsurpassed. And its tank remains the global leader in terms of performance.”

If the company’s year opened with a first-quarter pop, it closed with a giant bang. Fourth-quarter profits in 2019 were up 12% over the year before, the company reported in its Jan. 29 call with analysts.

A good chunk of that money flows into the commonwealth, where 11% of General Dynamics employees (11,995 of them) reside — about 8,860 workers in the Northern Virginia suburbs and the rest in the Norfolk area.

“This contract allows for our shipbuilding team, our suppliers and our employees to plan ahead so that we can continue to deliver submarines of unmatched quality, stealth and lethality,” Kevin M. Graney, president of General Dynamics Electric Boat, said in a statement.

“This is a really good news story,” Chairwoman and CEO Phebe N. Novakovic said of the division that won the contract, during the conference call in January. She cited the award’s effect on the division’s backlog, which rose 66% to $44.2 billion, and fourth-quarter revenue in the division, which increased nearly 12% to $9.2 billion.

“Suffice it to say that we are poised to support our Navy customers,” said Novakovic, a former CIA operative who’s led General Dynamics since 2013 and ranked No. 24 on the 2019 Forbes list of the World’s Most Powerful Women List. (She’s ranked four slots behind Oprah Winfrey and 16 places ahead of Queen Elizabeth II.)

The Navy contract also illustrates the massive impact General Dynamics has on Virginia, where Newport News Shipbuilding is the subcontractor for the project.

General Dynamics maintains its headquarters in Northern Virginia, where two of its 10 business units also are based — GD Information Technology in Falls Church and GD Mission Systems in Fair Lakes, outside of Fairfax.

The IT division drew big attention in 2018, when General Dynamics acquired Falls Church-based IT services company CSRA for $9.6 billion. CSRA had posted $5 billion in revenue the year before its acquisition.

In early 2019, former Morningstar analyst Keith Schoonmaker said in a note: “The CSRA deal roughly doubles the size of its existing IT business,” making General Dynamics “one of the largest IT contractors for the U.S. government.”

The move was a sign of the “ongoing transition” in the defense industry to bring data and analytics into its fold, says Robin Lineberger, a principal at Deloitte LLC who leads its Global and U.S. Aerospace and Defense practice.

Based in Northern Virginia, Lineberger declines to comment in detail on General Dynamics because it is a Deloitte client. But the IT acquisition was a “capacity build,” he says. “They believe there’s going to be value in the future.”

In the fourth quarter of 2019, General Dynamics landed IT business including an $800 million contract to serve state health insurance, $355 million worth of intelligence services to classified customers and a $150 million contract with the Homeland Security data center.

The company’s backlog in that sector has grown. “We are encouraged, but there is work to be done,” Novakovic said in January, reporting 2019 revenue of $8.4 billion, with $628 million in operating earnings.

About 25% of the company’s revenue in 2019 came from its commercial area of business, Gulfstream jets. That sector is experiencing a transition and faces a different pool of competitors than it sees from its defense business.

“What makes General Dynamics different from most big military contractors is that it has a robust commercial profit line,” the Lexington Institute’s Thompson says. “I think it’s a strength that they are diversified, because when military demand is down, commercial demand is often up, and vice versa.”

In October 2019, General Dynamics introduced the Gulfstream G700, which will be the largest business jet of its kind, a company spokesman said. Its first flight is scheduled for 2020.

Deliveries of the Gulfstream G600 started in the third quarter. Novakovic said she expects about 150 aircraft deliveries this year, as the G650 ramps down and the 600 and 500 models ramp up.

The company reported aerospace revenue at $9.8 billion and operating earnings at $1.5 billion in 2019.

But its Gulfstream business aside, General Dynamics is most closely tied to defense, and the whims of politics and new administrations can present challenges. “There’s always the danger that the customer could do something unexpected,” Thompson says.

Take the Optionally Manned Fighting Vehicle. General Dynamics ended up the sole bidder by an October deadline in a competition to build the prototype to replace the Army’s Bradley Infantry Fighting Vehicle, Defense News reported. Citing issues with competitive bidding, however, the Army said it was going to re-evaluate the program, leaving General Dynamics with nothing to show for the work.

But, Thompson says, “there are few companies that are as effective at working the Washington political process as General Dynamics is.”

In their 2020 outlook released in December 2019, analysts at Goldman Sachs & Co. listed General Dynamics as a “top pick” in the industry.

Although 2020 is an election year, Noah Poponak and his team at Goldman Sachs wrote, “the weighted average of those potential election outcomes is favorable for the sector.” They noted that geopolitics was a fundamental driver over U.S. politics and predicted continued growth in the defense budget.

Looking at the overall environment is promising, says Lineberger, who recently published Deloitte’s 2020 outlook on the aerospace and defense industry.

“Any major defense organization should be pleased with the defense budgets,” he says. “Under the current administration it appears sustainable at those levels, and perhaps some low single-digit growth.” 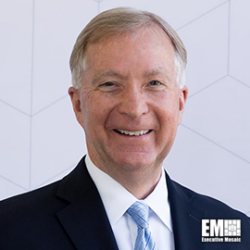