Virginians ages 10 and older will be required to wear masks in all brick and mortar retail stores, personal care and grooming businesses and restaurants starting Friday, Gov. Ralph Northam announced Tuesday. Face coverings also will be mandated on public transportation, state and local government offices and any indoor places where people congregate.

The Virginia Department of Health — not police or sheriff’s offices — will enforce the mask mandate, Northam said. “This is not a criminal matter. I’m asking people to respect one another. Protecting the people around us means face coverings.”

Meanwhile, Northern Virginia’s five localities and Accomack County are expected to enter Phase One of the “Forward Virginia” reopening plan on Friday, the governor said. As for Richmond, where Mayor Levar Stoney wrote to the governor asking for a “modified” Phase One in which houses of worship and grooming businesses would remain closed, Northam says he plans to make an announcement Wednesday.

Northam said the statewide mask requirement is meant to protect workers at stores and other public establishments. People who have trouble breathing, have health conditions that prohibit wearing a mask or can’t remove a mask without help are not required to wear one; also, face coverings are not required while eating, drinking or exercising.

“This is not about punishing people or certainly putting people in jail,” Northam said. Clark Mercer, his chief of staff, said VDH can enforce the mandate by rescinding a business’ license, similar to its enforcement of health codes at restaurants. “This is for grossly negligent actors,” Mercer emphasized.

Northam said he expects the General Assembly to address the issue of enforcement during a special session this summer, perhaps creating a civil fine for businesses that refuse to require customers to wear masks. Also, the state’s Department of Labor and Industry, which governs safety standards in private businesses, is developing workplace safety emergency standards involving PPE, sanitation, employee exposure, access to medical records and hazard pay, Northam said.

All employers and employees will be subject to the standards, which will be approved by the Virginia Safety and Health Codes Board.

Northam found himself in a spot of trouble over the weekend when he visited Virginia Beach’s Oceanfront without a mask — a moment captured in photos on social media. “I was not prepared because my mask was in the car,” he said Tuesday. “I take full responsibility for that. In the future, when I am out in public, I will be better prepared.”

Overall, the governor added, “Virginia Beach performed well this weekend. I saw that people were social distancing on the beach. They obeyed the rules.” Northam’s office is working with Norfolk and Hampton on their beach policies as they expect to open their shores this weekend.

Northam: NoVa will not enter Phase One on Friday 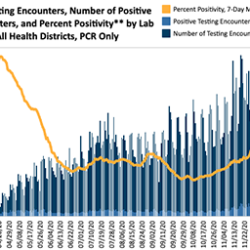