Indeed, MVP has faced so many setbacks that NextEra Energy Inc. said in February it was reevaluating its investment in the natural gas pipeline, citing “a very low probability of pipeline completion.”

The math on that calculation changed, since in late July, U.S. Sen. Joe Manchin, D-West Virginia, reached an agreement with Democratic leaders to support the Inflation Reduction Act, a $430 billion climate, tax and health care bill. The party cut a deal with Manchin that included having lawmakers and the Biden administration “take all necessary actions to permit the construction and operation of the Mountain Valley Pipeline.”

The pipeline would transport natural gas from West Virginia through the Roanoke and New River valleys, ultimately connecting to a pipeline near the North Carolina border. The 4th U.S. Circuit Court of Appeals sided with environmentalists, preventing the pipeline from passing through the Jefferson National Forest and crossing streams. In the initial deal, Democratic leaders agreed to move future pipeline challenges to the U.S. Court of Appeals for the District of Columbia, but that would need to be worked into a bill.

“With total project work roughly 94% complete, Mountain Valley remains committed to working diligently with federal and state regulators to secure the necessary permits to safely and responsibly finish construction,” says Natalie Cox, a spokesperson for Equitrans Midstream Corp., which will operate the pipeline and has a 48.1% ownership stake.

Equitrans remains committed to seeing the pipeline operational by the second half of 2023, according to Cox.

While several environmental organizations have praised the Inflation Reduction Act, conservation director of Charlottesville-based nonprofit Wild Virginia, says money isn’t worth setting a precedent of lawmakers telling regulating agencies to ignore provisions of the Clean Water Act or the Endangered Species Act to push through a fossil-fuel energy project.

“That just violates the whole principle of the laws, which is you go through a decision-making process, you weigh the facts [and] you make a decision based on those laws,” he says.

This story has been updated to reflect updated information. 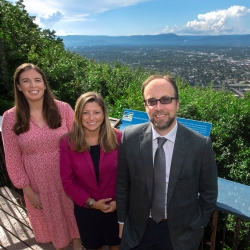 A new cohort of regional economic developers band together