Tim Steffan doesn’t mind boasting when talking about Tysons Tower. His employer, California-based Macerich, opened the 22-story building this June at the Tysons Corner Metro Station — one of four new stations at Tysons along the expanded Metrorail Silver Line.

The office tower rises above the Capital Beltway, offering panoramic views of Northern Virginia. “It’s got a host of amenities that are really unparalleled and unmatched by anything in the region,” says Steffan, a senior vice president.

Plus, it has something many NoVa office buildings lack these days: tenants.

Intelsat, a satellite service provider, leased nine floors for its new North American headquarters, in a relocation from Washington, D.C. Deloitte Consulting already is in the building, too. “We’re approaching 80 percent [leased], and we’ll be well over that by year’s end,” Steffan says.

The 552,000-square-foot building is part of 1.4 million square feet of development that Macerich has planned for Tysons Corner. The other projects include a 300-room Hyatt Regency Hotel and a 430-unit residential tower, which are scheduled to open in the first quarter of 2015.

Much of the Northern Virginia market can only look on in envy. The region’s office market hasn’t recovered from the beating it has taken over the past few years from cuts in federal spending, Base Realignment and Closure Commission reductions and budget sequestration, not to mention the recession.

As private-sector contractors and government cut their staff and their office footprints, vacancy rates soared.

Rosslyn’s rate hovers around 30 percent, according to recent data from the commercial real estate firm Cassidy Turley. Crystal City was close to 27 percent in the second quarter. The Interstate 395 corridor from Springfield to the Pentagon has it worst, with more than a third of its office space vacant.

At least in the near term, things don’t look bright. Net absorption for the region is negative and will likely stay that way the rest of the year, says CJ Hardy, a research analyst with Cassidy Turley. Vacancy for the Northern Virginia region was 18.1 percent mid-year and is getting worse. “It probably won’t hit 19 percent, but it will tick up a little,” he says. “Demand for office space has been pretty soft.”

Some submarkets are doing better. Reston Town Center — where a fifth new metro station opened — is the county’s second largest business center. It has 19.8 million square feet of office space, just behind Tysons, which has 26.3 million square feet. Reston’s vacancy rate is 1 percent, says Hardy. In Tysons at mid-year the rate was nearly 17 percent.

With the Silver Line now open, big projects in Tysons like the Macerich building “are benefiting from a lot of that flight toward quality,” Hardy says.

According to the Tysons Partnership, a coalition of Tysons developers, businesses and residents, three new buildings have been completed this year.

The downside, though, is that the new space just makes the market tougher for much of the rest of the region, which is dominated by older office buildings.

Macerich’s Steffan makes this pitch to prospective tenants: Employees will love it here so much that they’ll work longer hours. The new tower and apartment building connect to the Silver Line and Tysons Corner Center, a Macerich-owned  shopping center with more than 300 dining and shopping establishments.  There are more high-end restaurants opening and other amenities, such as public gathering places, that Steffan says will encourage people to hang out.

The Towers project includes a 1.5-acre grassy, elevated area called The Plaza, which has a kids’ play space, free concerts, movies, and free WiFi. A farmers market is planned next year. “This is a place where people want to work, so I can capture their time maybe 10 hours a day,” he says.

Places like Crystal City and the I-395 corridor are loaded with older office space and find it difficult to compete with the newer projects. Instead, they’re trying to attract smaller tenants with sweeter leasing terms.

Even the celebrated Rosslyn-to-Ballston corridor along the Orange Line of Metrorail is losing out to what used to be considered weaker locations. For example, in July the Department of Labor signed a lease for 75,000 square feet in a Vornado Realty Trust building in Crystal City, leaving behind its 91,000-square-foot space in Rosslyn.

Multifamily projects continue to lead the charge, especially along transit routes and especially in Tysons. The Ascent at Spring Hill Station, a 404-unit luxury apartment building by Greystar, opened in March. It’s no surprise that the new rail stops in Tysons are seeing the most construction of multifamily units. Getting people to live in Tysons is key to the county’s plan. 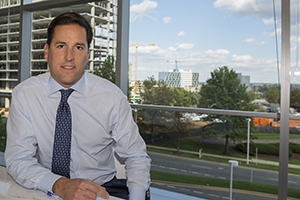 Paul Norman, executive director of Cushman & Wakefield’s multifamily team, says new development in Tysons will bring in about 5,000 apartments in the next year. “That’s a big number, but not when you consider how underserved Tysons has been” in residential space, he says.

Before the current building boom began, Tysons had 11 jobs for every one resident, Norman says. The county’s goal is to get that ratio down to four to one. That would help transform Tysons from an auto-dependent office park to a more urban transit-oriented district where people live and work. Grocery stores and restaurants and other retail offerings are popping up in Tysons, just as they did in the Rosslyn to Ballston corridor more than 30 years ago after its Metrorail stations opened.

“Now that Metro is open [in Tysons] it’s not inconceivable that a lot of people who previously were going to the Rosslyn-to-Ballston corridor will be coming to Tysons,” says Norman. With Tysons adding several thousand residential units in the near future, that much-heralded transit corridor will face some competition, especially if employers migrate toward newer office space. “Not everybody can afford to live and work in Arlington,” Norman says.

The market is still sorting itself out, often with one location taking tenants from another without much net gain for the market. For example, despite the dismal market conditions for office space, JBG Cos. is building a 31-story tower atop the Rosslyn Metro Station in Arlington that will open in 2018. The project will have 525,000 square feet of office space, a 377-unit residential tower, a public observation deck, public plaza and 45,000 square feet of ground-level retail. CEB, a member-based advisory company based in Arlington, has signed on to take 15 stories in the new building and will consolidate its other locations in Arlington into the new building.

That’s not enough to offset the 1,381 federal jobs lost through the first half of 2014, yet the growth trend is a good sign, says Hardy. The headwinds of federal agencies and federal contractors taking less space are still in place. Consequently, landlords are adjusting to the new market because they have to, he says. “So maybe we recover a little bit more, and then we see more expansion.”