'Everybody is operating outside of their comfort zone right now.'

“There’s not a general increase in employment at this point. We’re working with the teams that we have,” says Devon Anders, president of Mount Crawford-based InterChange Group Inc., a logistics company that operates throughout the commonwealth. “And we’re trying to assure them that it’s safe to come to work and we need them to come to work at this time. We need you to be here.”

Amid high demand from grocery stores, InterChange has seen its food inventory levels go down due to increase in retail demand, and as a reaction, the company’s manufacturing customers are ramping up production quickly. “For those that are servicing the [food retail industry], inventory was moving out very quickly,” Anders says. “And within the poultry, dairy, beverage industries, they are ramping up production to basically backfill that.”

InterChange has been approached by food service companies for restaurants seeking space to store products that aren’t currently in use. “But the bulk of our customer base is shipping through retail channels,” Anders added, “and that has created empty spaces in our warehouse as that demand has ratcheted up and they’re starting to backfill now with increased production.”

Despite increased demand for space at warehouses, some logistics companies have experienced losses.

Wytheville-based Camrett Logistics is facing customers who are circumventing its third-party logistics (3PL) services and shipping directly to retailers during the crisis. Four of its largest customers were either shutting operations down or bypassing 3PLs to ship directly to stores to keep up with demand, says Cameron Peel, the company’s vice president and chief client officer. With that business lost, Camrett has had to lay off 80% of Camrett’s 100-plus workers.

March is typically Camrett’s busiest month of the year, due to an annual contract to build displays for one of their clients that has the majority of its sales in the summer. However, stores are “taking product as fast as they can to keep their shelves stocked,” Peel said, which means there’s no time for setting up displays of this kind. And that translates into lost business for Camrett. “In this one program, we have stopped all production, which will lay off about 40 great, hard-working American women and men,” Peel says. “The stores are … bypassing the Camretts of the world and their value-added services.”

Peel said that he hopes his employees — whom he calls “family members” — can return to work after Easter.

Other logistics workers experiencing hardships from the economic crisis include truck drivers, who are susceptible to COVID-19 exposure while driving to and from multiple manufacturing, warehousing and logistics sites. These retail channels sprawl out along several states, each with different social distancing measures and mandates.

New York has accounted for more than 25% of the nation’s COVID-19 deaths, but it’s also a key East Coast state that InterChange truck drivers for the logistics company have to pass through to make deliveries in Connecticut, one of the states that InterChange services.

“One of the challenges that we’ve had is the diversity of the states … not having standardized laws or regulations right now that are dictating what we can do as we transit across multiple state lines,” Anders says.  For example, some states, including Pennsylvania, have closed rest stops. “That kind of stuff has been just causing angst and questions,” Anders says.

In normal times, Camrett Logistics would have hundreds of different drivers arriving at any of its 10 locations per week. But now that creates challenges for social distancing.

“We provided our employees with gloves to handle paperwork and interact with drivers as they came in,” Peel says. “We tried to provide hand sanitizer, but have been unsuccessful in locating any. We did have plenty of Clorox and Lysol wipes and sprays. We are cleaning vigorously and advising everyone to keep their hands as clean as possible.”

Anders also has implemented policies to limit the amount of paperwork that gets transmitted from an inbound truck driver to the logistics team and vice versa, he says.

To streamline some of these logistical challenges, Hanover-based Orbit Logistics, in partnership with other Virginia based supply chain providers, created the Virginia Supply Chain Initiative, a centralized supply chain clearinghouse for businesses and local governments responding to the COVID-19 crisis. The initiative’s goal is to provide a one-stop resource for organizations needing to supplement or enhance supply chains.

“Some of the feedback we were getting on the street was there was a need [to get together] a few people to get a project done, but they didn’t know where to start,” Orbit Logistics President Travers Clemons says. “What we’re trying to do is do all that legwork in advance, so when there’s a need, that it can come directly to us.”

“We’re looking to glue together the supply chain,” Clemons says. 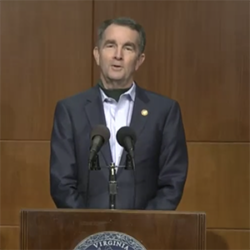 Northam: Life may not return to normal soon

Governor extends social gatherings ban, restaurant restrictions and mandatory closures of some businesses until May 8.