Located within minutes of the world’s largest naval base, the Atlantic coast, the Port of Virginia and the Thomas Jefferson National Accelerator Facility, Old Dominion University parlays its setting into a variety of research activities.

Research that brings acclaim and additional funding to the Norfolk-based university, while transcending the boundaries of Hampton Roads, reflects the mantra of the university’s Office of Research. It urges the more than 700 ODU researchers to “Innovate Locally, Transform Globally.”
“We take advantage of our proximity to physical things like the Jefferson Lab or our location near the coast,” says Morris Foster, ODU’s vice president of research. He points to the university’s studies on port and logistics and coastal resilience, as well as its two-decade collaboration with the Jefferson Lab, a relationship that has attracted Old Dominion faculty involved in accelerator physics. “We’re looking for unique things that allow the university to focus on a particular area and make it ODU’s niche.”

Research has long played a prominent role at Old Dominion, which gained university status in 1969. The stakes were raised when John R. Broderick became president in 2008. Broderick set a goal of transforming the university into a research-intensive incubator known worldwide for “innovative discoveries, insightful scholarship and inspiring action over a range of disciplines.”

Today, ODU researchers generate $88 million in annual funding through more than 400 projects at the university’s 26 research centers. Foster believes Broderick’s goal is close to being met. “In some areas, we’re already there,” he says, noting research in modeling and simulation, physics, bioelectrical engineering and oceanography.

Faculty members initiate much of ODU’s research by bringing their projects — and funding dollars — to the university.  “We hire them because they have very good scholarship and are very good faculty who create their own research paths,” Foster says. In addition to time in the laboratory or in the field, all faculty researchers maintain course loads in their departments.

Their research assistants include master’s and doctoral candidates as well as a growing number of undergraduates. “It enriches their education and has a halo effect on their degrees,” Foster says of the undergraduates. “Research gives them the real-world experience many companies are looking for.” 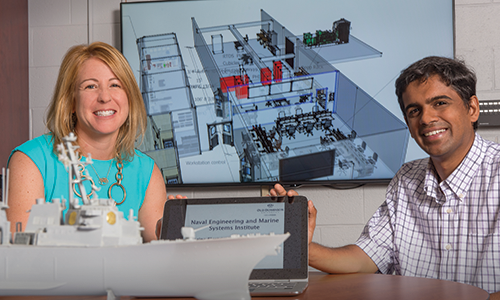 As founding director of ODU’s Naval Engineering and Marine Systems Institute (NEMSI), Jennifer Michaeli conducts pioneering research while whetting engineering students’ appetites  for careers in marine engineering, currently offered as a minor in ODU’s Batten College of Engineering and Technology.  “There’s a strong demand for marine engineering,” she says, noting that only 15 universities in the U.S. produce graduates in the field. “That’s only a fraction of what’s demanded for the engineering profession.”

Michaeli’s research focuses on shipboard power systems. She was one of 225 university researchers in the U.S. and the only one from ODU to receive $67.8 million in research instrumentation awards from the U.S. Department of Defense, which supports the purchase of equipment for defense-related research. Using a grant from the Office of Naval Research, Michaeli and her colleagues, Paul Moses, assistant professor of engineering technology, and Gene Hou, professor of mechanical and aerospace engineering, study shipboard power systems as they develop a real-time, power-hardware-in-the-loop simulator for naval power systems.

The shipboard environment is replicated in ODU’s marine dynamics and marine electrical power systems labs. “That allows us to be in a safe environment to simulate the entire electrical system on a ship to do cutting-edge research for the Navy and teach students,” Michaeli says, adding that in the future, ships will have more sophisticated electrical demands. “We can bring in physical hardware, including pump generators and electronic weapons such as lasers. We have to be the best we can be to produce students that are well qualified, because we really need the next generation of engineers to be very competent in their ability to work with electrical systems.”

Late last year, the university signed a memorandum of understanding with Newport News Shipbuilding to collaborate on research, design, testing and experimentation.  “Through this partnership, we can bring our faculty and research capabilities to them, and it allows our faculty to better understand the needs of the shipyard,” Michaeli says.

Marine engineering and shipbuilding are natural fits for Michaeli. Her great-grandfather came to Hampton Roads from England to build ships at Newport News Shipbuilding, while her grandfather rose through the ranks at the shipyard to become vice president of operations. Her father, uncles and cousins also worked at Newport News Shipbuilding.  “It’s in my blood,” she says. Michaeli received her doctorate in mechanical engineering from ODU in 2010 and returned to the university two years later as a faculty member. “I saw a great faculty here who are doing innovative research.”

Plasma’s effects on cancer
Resembling a miniature version of Obi-Wan Kenobi’s Star Wars light saber, a plasma pencil developed by Mounir Laroussi is used to kill bacteria and sterilize surfaces and could one day become the go-to treatment to kill cancer cells. In 2005, Laroussi, director of ODU’s Plasma Engineering and Medicine Institute and professor of electrical and computer engineering, designed the hand-held device that emits a stream of cool plasma. An ODU faculty member since 1999, Laroussi specializes in plasma that can be created at room temperature and used for medicinal purposes, including dental and wound treatment.

Known as one of the four states of matter along with solids, liquids and gases, plasma is produced when gas is heated or subjected to a strong electromagnetic field. “Plasma is usually generated inside an enclosed chamber,” Laroussi explains. “We wanted to get it in the air, and this [pencil] design allowed for that. We can shoot a beam of plasma that’s safe to the touch and apply it on tissues, wounds and use it to sterilize surfaces.”

Laroussi began investigating plasma’s effects on cancer cells in 2010. It’s a brand-new field, with most researchers building scientific knowledge, while a group in Germany has begun doing clinical trials on head and neck cancer patients. “We’re trying to understand what plasma does to cancer cells so we can optimize the process and make it more efficient,” he says. “We’re getting very, very encouraging results where plasma kills cancer cells without hurting healthy cells.”  Laroussi and his research team found that more than 90 percent of leukemia cells were wiped out when they came in contact with plasma. “It’s still in the scientific development stage, but hopefully in the future, plasma will be one of the therapies people use for cancer.”

Sea-level rise
With the local sea level rising nearly two inches each decade, ODU researchers are looking at how Hampton Roads can adapt to increased flooding, as well as the impact of climate change on public health and disaster preparedness. Joshua Behr, research associate professor at ODU’s Virginia Modeling, Analysis and Simulation Center, is studying the socioeconomic impacts of sea-level rise and how vulnerable populations can prepare for and respond to severe storms.

“If we can understand the hurdles people have, we will be able to design interventions for some of the most vulnerable populations,” says Behr, a political scientist. “People think recurrent flooding is a nuisance, but the accumulated impacts are huge. Everyone feels the impact of recurrent flooding in Hampton Roads, but low- to moderate-income levels feel the brunt of it. The economic burden falls more heavily upon them in terms of missed work, missed school, missed doctors’ appointments, and vehicle and home damage.”

Earlier this year, Behr’s work helped Virginia and three Hampton Roads localities win a $120.5 million grant from the U.S. Department of Housing and Urban Development to help combat the effects of recurrent flooding in the region. ODU coordinated the proposal, which was submitted to HUD by the Virginia Department of Housing and Community Development on behalf of Norfolk, Chesapeake and Newport News.

Behr is developing models for HUD that project storm recovery using Portsmouth and Norfolk as prototypes. “We want to generate tools that provide decisive support for planners and help them make better policy decisions by generating a bigger picture view of things,” he says. “That gives planners a better perspective of how policy choices ripple.”

Behr’s background is in voting rights litigation, but for the past dozen years, he has used spatial mapping to measure disparities in health conditions and access among cities and neighborhoods in Hampton Roads. “It was eye opening,” he says. “I couldn’t believe there were such disparities and chasms between populations.”

Finding ways to combat sea-level rise and recurrent flooding while redefining land uses will make Hampton Roads more resilient and livable, Behr says. Characterizing the region as a “system of systems”  including transportation, communications and water infrastructures, as well as social, economic and health systems, he builds models of those systems, testing where localities can get the most bang for their bucks.

“Municipalities should invest in their systems before disaster strikes,” he adds. “If you put $1 million in this system versus somewhere else, what gives you the biggest return as far as pain, suffering, longevity. That information helps guide planners and decision makers in prioritizing certain policies.”

During the past decade, Hampton Roads cities and counties have begun seeing themselves as part of a broader regional system, Behr says. Ultimately, the region could export lessons learned to other areas dealing with similar climate issues. “It’s been gradual, but we’re headed in the right direction. We’re ahead of the curve, and we’re in the right place in Hampton Roads to be leading the pack.”