From their sixth-floor penthouse near downtown Richmond, Josée and Bill Covington enjoy sweeping views of the James River. “We can see the fishermen catching fish,” says Josée.

In the summer, colorful kayaks float by while December brings a parade of boats decked out in holiday lights. “There’s never a dull moment from our terrace,” she says.

Josée, the founder and CEO of Covington Travel, and Bill, a dentist, were among the first to purchase condominiums in the Fall Line building at Rocketts Landing seven years ago.

They left a 3,500-square-foot house with a pool in the Henrico County suburbs — where they had lived for 36 years — for an urban location with wall-to-ceiling windows.  “We’re always in the middle of the sky practically. It’s open. That’s what I like,” says Josée.

The Covingtons also enjoy Rocketts’ amenities. The community has a pool, marina, apartments, office space and restaurants within walking distance of their condo. “I want action. This is where the action is,” says Josée.

The Covingtons are among a wave of people across Virginia who are trading in traditional homes for high-rise living. The properties in or near city centers appeal to a broad range of demographics.

“It’s a very hot market to be in,” says Charlie Wexell, an assistant property manager for the Avant, a 15-story, upscale apartment project at Reston Town Center. The 359-unit Avant opened last November. “We are a hair over 50 percent leased,” says Wexell.

Avant’s owner, Boston Properties, is so pleased with the project’s progress that it is proceeding with the design for a second apartment community near Reston Town Center. It would have 500 units in two 21-story towers.

“It will take about a year, and then we will gauge the market at that time before we decide to go,” says Richard Ellis, a vice president with Boston Properties in Washington, D.C. “We’ve been able to attract a wide range of demographics: empty nesters, divorcées, young working professionals, even newlyweds.”

Altogether, there are nine high-rise buildings under construction in Tysons — many of them apartments, a fact that doesn’t go unnoticed by Ellis. The multifamily sector has been one of the most active in commercial real estate for the past few years, and there is plenty of new supply coming online in Northern Virginia. “We have some concerns about that, but we think it’s about the submarket you are in and the amenity you have at your doorstep, and we have Reston Town Center,” says Ellis. 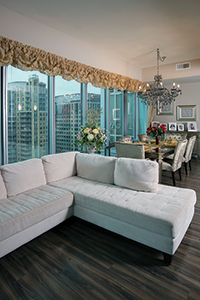 Zalena Khan says she has no regrets about moving to the Avant. From her perch in a corner-unit penthouse high above the street, the world looks like a monopoly game, she says.  “All the little buildings, the pool. It’s just beautiful how it looks from here.”

With floor-to-ceiling windows in all three of her bedrooms, “you always feel like you are outside,” says Zhan.  She and her son can see nearby Washington Dulles International Airport, a hospital, a library and Zhan’s favorite: storms rolling in with lightning and rain. “When it snows, you can literally see the heavy drops of snow and how it becomes white,” she says.

The 42-year-old, self-employed financial consultant signed a two-year lease. As a single parent, she likes the building’s security, its underground garage away from the elements and what she calls the icing on the cake: a drugstore on the building’s first floor.  Reston Town Center is just a few steps out the building’s door, offering more than 50 shops, 30 restaurants, a 13-screen cinema and year-round events. “It’s like living in the middle of a village,” says Khan.

Not far from the Avant is a 21-story condominium community in Reston called Midtown. That’s home to Maggie Parker, a communications executive in her early 50s, who recently downsized from a 7,500-square-foot home in Great Falls. She bought a three-bedroom condo unit on the 15th floor and loves the views.

“When I get home I don’t want to leave. I’m tucked away in this little aerie — the windows, the black sky with the airport traffic, or the moon and stars. It’s just captivating.”
Nor does Parker mind the condominium fees. “Compared to long-term household maintenance fees, it’s nominal. You don’t have to budget for a $20,000 roof or a $10,000 septic system.”

Another 16-story high-rise apartment building, Vita, is going up at Tysons Corner within walking distance to a new Silver Line Metro station.  Michael Caplin, executive director of the Tysons Partnership, says there’s a waiting list of people who want to lease space at Vita, which is scheduled to open later this year.

Caplin leads a group of citizen and business associations committed to transforming Tysons Corner, a 2.2 million-square-foot office and retail center, into a more pedestrian-friendly place. “The demographics tell us there is a huge interest in urban apartment dwelling right now,” says Caplin. “There are a lot of people who are giving up cutting their grass and trading it in for an apartment because of the simplicity and the immediate accessibility of amenities. To go downstairs and have everything there is very alluring, especially since we have relied on cars for so long.”

The story is much the same at projects in other parts of the state. 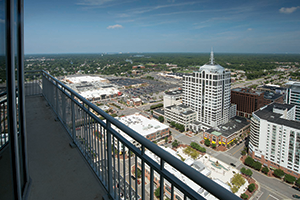 The prices  for these homes range from the low $400,000s to $2.2 million, says Minor.  Daniel Hoffler, chairman of Armada Hoffler Properties Inc., a real estate investment trust located at the Virginia Beach Town Center, owns the 3,200-square-foot penthouse unit on the top floor of the 36-story building.

The hotel takes up the building’s first 15 floors; condos are located on floors 16 through 36.  According to Minor, the units are popular among working professionals and part-time residents who use them as a second home. “Our oldest resident is 92,” says Minor. Amenities include room service, (which residents must pay for) and access to the hotel’s pool and exercise center. Monthly condominium fees range from $566 to $1,020, says Minor, and cover insurance, maintenance of common areas and other items in the association’s budget.

Meanwhile in downtown Roanoke, developer Bill Chapman invested $12 million renovating the former Shenandoah Building into Parkway 301, a seven-story apartment project that opened last year. “It’s been a successful project for us,” says Chapman, who lives in Richmond. “We preleased 88 of the 89 apartments.”

Today, the building, the former headquarters for the Blue Ridge Parkway, is 100 percent leased. “I think it’s part of the authentic living experience of living in a building with history, more so than living in a high-rise,” Chapman says of the building’s high occupancy.

Back in Richmond, Rocketts Landing is poised for more growth. Coming soon are more apartments, retail and a five-story building of four riverfront town homes. The $1 million dollar town homes already have been sold, according to Richard Souter, a vice president for Rocketts’ developer, the Richmond-based WVS Cos.  In May, WVS sold more than 20 unsold condos at auction, at prices ranging from $150,000 to $476,000 — far below the units’ original sticker prices. While some property owners raised concerns about their homes’ values, Souter says the auction was necessary to close out the project’s first phase and set the stage for new development, which will help boost property values.

As for downsides to high-rise living, storage space is at a premium. “You learn to be very organized with your closets and your cupboards,” says Josée Covington.