Freelancers talk about the ups and downs of being independent

When Karen Bate’s husband’s job sent him to France for two months, she packed her bags and moved with him from Arlington County to Paris. During that time, she continued to serve her American clients from an apartment and coffee shops in the City of Lights.

That flexibility — being able to choose where and when you work — is one of the reasons people like Bate increasingly are drawn to the “gig economy.”

Workers in this economy are hired on an on-demand basis and get paid for individual contracts. While this arrangement appears to be growing in Virginia and elsewhere, it’s hard to define a gig worker and determine how many are in the workforce.

“Anecdotally, it seems to be growing. But how much it’s growing and what percentage of people who are basically full-time, gig-economy people, I think, is less clear,” says Chris Lu, a deputy secretary of labor under then-President Obama who now is a senior fellow at the University of Virginia’s Miller Center.

Part of the problem is there are many definitions of gig workers, Lu says. Most people probably think of Uber and Lyft drivers (and others working through on-demand, digital platforms) as gig-economy workers. However, is a plumber who works full time for a contractor but handles odd jobs on the weekends a participant in the gig economy, too?

Counting the workers
The U.S. Department of Labor (DOL), which tracks workforce figures, doesn’t have a category for the gig economy. In May, DOL updated its survey on the nation’s temporary and alternative workers, but the results won’t be released until next year. DOL last ran this survey 12 years ago, counting 5.7 million temporary workers, 10.3 million independent contractors, nearly 2.5 million on-call workers, 1.2 million temp-agency workers and 813,000 people working for other firms on contract.

While results from the latest DOL survey aren’t available yet, other organizations have offered estimates on the current number of gig workers. A recent report by Emergent Research and Intuit, for example, says 3.9 million Americans are finding work using online platforms such as Lyft, Upwork and TaskRabbit. That figure is expected to grow to 9.2 million by 2021. The study says many people using these on-demand platforms are supplementing their existing income (41 percent have traditional full-time or part-time jobs).

It’s unclear how many of these workers are Virginians. The Virginia Employment Commission (VEC) collects its data from employers paying unemployment insurance benefits. The agency doesn’t track independent contractors.

The U.S. Census Bureau, on the other hand, tracks businesses with no paid employees, a segment that has been growing in Virginia and the U.S. since 2008. The commonwealth had 494,516 of these companies in 2008, a number that increased to 576,446 in 2015, the most recent year with available data.

“Millennials have been more apt to consider freelance and short-term work, given their relaxed attitudes about corporate loyalty and tenure in the workplace,” she says. 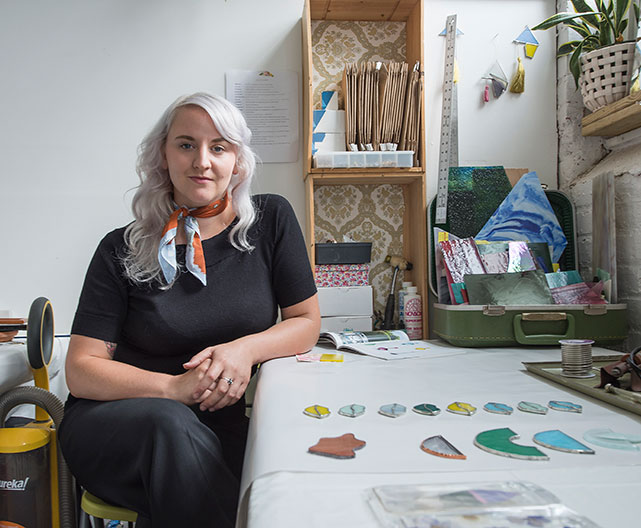 Kelsie McNair is one of the millennials drawn to the gig economy.

“I think being a freelancer, ultimately, is an awesome way for me to live,” says the 28-year-old Norfolk-based artist. She has been taking part-time and contract work since she graduated from college in 2011. McNair owned a shop selling vintage clothing for a few years, but she also had gigs on the side during that time.

McNair says she’s not opposed to working permanently for someone else, if the right opportunity comes along. Nevertheless, she enjoys the flexibility of being a freelancer, which allows her to learn new things. In addition to owning a company, With Lavender & Lace, which sells floral iPhone cases and other handmade objects, McNair’s current gigs include working as a stylist, branding agent and performer. “I work with whatever jobs are around or available for me when I need them,” she says.

Freelancing also allows her to choose assignments or work on her own projects. However, freelancing also can be inconsistent, she says, with dry spells and jobs that aren’t a good fit for her.

Christine Stoddard, a 28-year-old writer and artist based in Arlington County and Brooklyn, N.Y., also likes the freedom of being a full-time freelancer.

“At my core, I know that I’m a creative writer and … artist, and I want to have freedom to do my own projects,” she says. “I get to do those things much more regularly when I work for myself than when I work for somebody else.”

Stoddard also points out that, growing up, she didn’t have a model for a standard desk job. Her parents ran their own company. “I knew that there were challenges, but there were challenges that were easier for me to understand and accept because I had seen them my whole childhood,” she says.

Clearing hurdles
So what are the biggest challenges of working gig to gig? Stoddard points to a few hurdles: keeping financial records, maintaining a steady stream of clients and keeping adequate savings. “You need a lot more in savings than you would if you had an office job,” she says. “Even if you know how much you’re invoicing every month … you don’t necessarily know when you’re going to get paid even when you have worked with a client for years.”

Freelancers with specialized skills, in areas such as graphic design or writing, also have more control over their wages and hours than other people handling gigs. “Uber drivers are probably at the opposite extreme in terms of how much they can really kind of grow what they’re doing, other than simply working more hours,” says U.Va.’s Lu.

Freelancers frequently have to fend for themselves for health insurance and retirement benefits. Stoddard and her husband receive health insurance through the Affordable Care Act (ACA) exchange, with her husband’s job subsidizing part of their cost. They also put aside money each month for retirement. Stoddard says she would hate to see the ACA repealed but is prepared to continue paying for insurance if that happens. Her ultimate goal is to get full-time work through grants, fellowships and residencies, which she says offer benefits during the program’s duration.

One Virginia lawmaker is envisioning a future where benefits will be more favorable to people in the gig economy. Earlier this year, U.S. Sen. Mark Warner introduced legislation that seeks to establish a $20 million federal grant fund to offer incentives to states, localities and nonprofits to experiment with portable benefit models for independent workers. Warner’s bill and  identical legislation introduced in the U.S. House of Representatives have been referred to committees in their respective chambers.

“We’re probably the only country in the world that ties [benefits] to your work status,” Warner says about his motivation for introducing the bill. “People work fine until the stuff hits the fan, and then they have nothing to fall back upon unless they are remarkably good savers or remarkably responsible. That’s a really dangerous place to be for a society.”

At Hinz Consulting, a Herndon-based company that assists government contractors, many of the company’s nearly 150 independent contractors get health insurance from a former employer’s retirement package, Medicare or their spouses’ health plans. When he was an independent contractor, CEO Peter Hinz, was covered under his wife’s plan. “One spouse has the ‘safe’ career with benefits. The other spouse then gets to be entrepreneurial,” he says.

Though the gig economy allows those with entrepreneurial mentalities to thrive, it also has its downsides, too, Hinz says. Freelancing offers a certain amount of freedom, like being able to take a vacation in Tahiti on a whim. However, you may be afraid to leave town for fear of losing a client. “What you do is you end up taking on too much or you’re as stressed as you ever were in your corporate job,” Hinz says with a laugh.

McNair, the Norfolk artist, says taking a vacation isn’t part of her routine. If she’s traveling, it’s related to work. There may be no trips to Tahiti, but McNair doesn’t seem to mind.  “I get stressed if I’m not working in some way,” she says, but adds that her job is fun and experimental. For many independent contractors, that may be enough to outweigh the problems associated with working gig to gig.