A firm conducting an investigation at Liberty University will use an encrypted website to allow anonymous whistleblower complaints focused on financial misconduct by “current or former members of university leadership,” the university announced Tuesday night.

Chicago-based public accounting firm Baker Tilly US began its probe of the Lynchburg-based Christian university in early September, several days after the resignation of former president and chancellor Jerry Falwell Jr., who resigned following global media coverage of a scandal involving his wife’s affair with a young pool attendant the couple had befriended and aided with a business deal to receive a stake in a youth hostel purchased by Falwell.

Other media reports in recent years indicated that Falwell and family members may have used university real estate deals and other holdings for their own advantage or to assist friends. A 2019 story by Reuters reported that Falwell had approved real estate transactions by Liberty University, which as a 501(c)(3) nonprofit does not pay taxes, that helped his personal fitness trainer, Benjamin Crosswhite, purchase an 18-acre racquet sports and fitness facility from Liberty for $1.2 million. To aid Crosswhite in the acquisition, Liberty provided Crosswhite with a $550,000 loan at 3% and also agreed to lease back tennis courts for $650,000.

Liberty’s board of trustees announced the outside investigation in August, although it did not specify which firm would conduct it. “One of the leading forensic firms in the world has been retained by Liberty University’s Board of Trustees to conduct a thorough investigation into all facets of Liberty University operations during Jerry Falwell Jr.’s tenure as president, including but not limited to financial, real estate and legal matters,” the board said in a statement then.

In an Oct. 20 letter to the university community, the board’s executive committee did not mention Falwell specifically but requested information that “might be useful to this forensic investigation into potential misconduct in business operations of the university and/or any improper decisions or actions by current or former members of university leadership.”

The portal, which uses encryption methods to ensure privacy and allows anonymous reports, “permits the confidential submission and collection of sensitive information from current and former Liberty University management, personnel, contractors and business affiliates.” The university did not specifically mention student input. The site is hosted by a third-party company, EQS Group, and is being operated independent of Liberty, the letter says. It will be open to receive reports for 60 days, through Dec. 20.

Potential whistleblowers should provide information that suggests a current or former member of university leadership engaged in conduct that is “illegal, unethical from a business perspective, or improper in … the operation of a nonprofit organization,”  including “self-dealing, kickbacks, embezzlement, misappropriation, problems with data protection or IT security, tax reporting, taking unauthorized actions, usurping business opportunities [and] misuse of university funds/assets,” according to the site.

In several places, the site says that Virginia law and university policy prohibit retaliation against anyone who makes a report “in good faith” and “cooperates with any subsequent investigation.” Anyone who reports a potential violation should receive a response within 10 working days, the site adds.

On the first page of the reporting form, site visitors must choose a category from the following options: construction, consulting/vendor agreement, donation/contributions, financial reports/tax issue, hiring/retention, investments (endowment and others), real estate (sale/purchase/lease), self-dealing/personal benefit, student finance/accounts and other.

Site visitors also are asked to describe the situation, including the date and all people involved, as well as if it occurred more than once, and if others have direct knowledge of or access to documents related to an incident. The site also asks if the matter was previously reported to the university board, a member of the executive team or senior leadership.

Save 71, a group of Liberty alumni who have been critical of Falwell and the board, responded to the announcement Tuesday night on Twitter, noting that the scope of the investigation is limited to finances and that it will not look into sexual misconduct allegations.

“Baker Tilly is a reputable accounting/consulting firm,” the group wrote. “But that doesn’t mean this investigation will solve LU’s problems. To anyone who may wish to fill out a report: Read the privacy policy very carefully first. We trust Baker Tilly, but we do not trust the men who hired them.”

Falwell was the subject of an August Reuters report alleging that he and his wife, Becki Falwell, had been involved in a years-long sexual relationship with Giancarlo Granda, which began in 2012 when the former pool attendant was 20.  Granda said in an interview with Reuters in August that he had an affair from 2012 to 2018 with Becki Falwell and that Jerry Falwell Jr. participated by watching them have sex, an allegation Falwell denied, although Falwell acknowledged his wife had an “improper relationship” with the now-29-year-old Miami man. Granda also managed a Miami Beach youth hostel that a shell company under Jerry “Trey” Falwell III’s name purchased in 2013 for $4.65 million. According to a 2017 Politico article, Falwell III was given the money to purchase the property by his father. There is no indication that any Liberty funds were used in the transaction and Falwell Jr. said in a 2018 affidavit that he invested $1.8 million of his personal funds into the project. A representative for the Falwells told Reuters that the family gave Granda a stake in the hostel in exchange for managing it.

Falwell has claimed that Granda was attempting to extort money from his family by threatening to go public with his accusations, a charge that Granda denies. 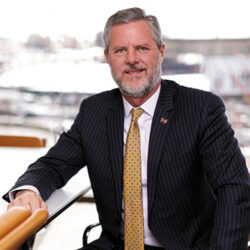 Formerly the Falkirk Center, it's now the Standing for Freedom Center