Let’s be more creative in deciding a tied election


U.S. intelligence officials say midterm elections this fall face almost certain attack by the Russians hackers. They are expected to use social media and other means to sow discord among voters and undermine confidence in the election process.

So, it’s not a great time for Virginia to determine the outcome of an election by what I would describe as an updated version of the “Ooey Gooey” game.

Last fall’s legislative elections unleashed a Democratic wave of upsets that threatened to overturn Republicans’ long-held majority in the House of Delegates. In fact, the GOP’s seemingly impregnable 66-34 margin was reduced to 50-49 with the race for one seat, the 94th District in Newport News, knotted in a tie in early January after a contentious recount.

A 1705 Virginia law dictates that the way to determine a winner in such a situation is “by lot,” essentially a drawing. This was done by state election officials randomly plucking one of two identical film canisters from a blue and white ceramic bowl made by Steven Glass, the resident potter at the Virginia Museum of Fine Arts. Each canister contained a piece of paper with the name of one of the candidates. The name in the selected canister was David Yancey, the Republican incumbent. His re-election narrowly preserved the GOP majority in the House, 51-49.

The tiebreaker process, which was broadcast live, was completely above board and transparent. But you have to wonder: Is this really the best way to determine an election, especially when so much is at stake?

For some, the event recalled the “hanging chads” of the 2000 presidential election, in which Florida officials pored over mangled ballots while trying to decide who had won the Sunshine State’s electoral votes. The issue eventually was decided by the U.S. Supreme Court, which awarded the electoral votes, and the election, to Texas Gov. George W. Bush.

For me, however, the tiebreaking exercise resurrected memories of a children’s television show. Like the popular “Sailor Bob” show in Richmond, the daily “Popeye Club” broadcast from Atlanta had a loyal following in the 1960s.

Officer Don (Don Kennedy) was the show’s host. Outfitted with a whistle and badge, he would entertain children in the audience with games between cartoons. A regular feature was the Ooey Gooey game, which involved a rotating table filled with paper bags. All but one of the bags contained candy or toys. The last one, however, was filled with a disgusting mixture of broken eggs and syrup.

A boy or girl from the audience was selected each day to play the game. Blindfolded, the child would reach into one of the paper bags as they spun around on the table. I don’t remember anyone getting the dreaded bag of goop except Officer Don who never could stop himself from playing the game, too. On cue, the kids all cried, “Ooey Gooey” as he would grimace and pull his dripping hand out of a bag.

In essence, the film canister drawing in Richmond determined who would get the Ooey-Gooey bag after a long, hard-fought campaign. Thankfully no sticky substance was dripping from the VMFA bowl. But if the commonwealth is going to decide elections with children’s games, then it needs to use some imagination.

I suggest that the legislature consult with some experts in this area, minor-league baseball teams. They come up with an endless stream of contests to entertain the crowd between innings.

Norfolk Tides fans, for example, have competed for prizes in games that variously involved maneuvering basketballs with leaf blowers, catching beanbags with skillets and dancing on top of the dugout with the team mascot. People attending Richmond Flying Squirrels games have been challenged to catch water balloons or run in a straight line after circling a baseball bat 10 times.

If these games seem too trivial, however, the Virginia Board of Elections could break ties by testing candidates’ knowledge of current events and the U.S. Constitution.

For current events, I would suggest using the Wall Street Journal’s multiple choice news quiz. A candidate would automatically lose the tiebreaker if he or she chooses any of the answers that the editors throw in just for laughs.

Here is an example from the WSJ’s March 3 edition: “Hope Hicks is resigning as communications director in a turnover-prone White House. How many people have held the job since President Trump was inaugurated?”

The candidate who chooses “D” is disqualified. The correct answer is four, which is bad enough. That number represents one communications director for about every 100 days of Trump’s tenure.

As for the Constitution, here are four questions from a widely used test:

The answers are: the year 1787, 27 amendments, 435 members of Congress and the speaker of the House in line of succession.

The questions, by the way, were drawn from 100 potential questions for the naturalization test, the exam immigrants must take to become U.S. citizens.

How many of those questions could your legislator answer correctly? 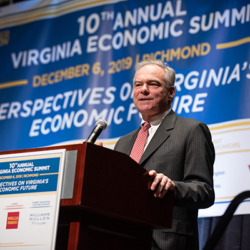 Advice for Dems from “America’s Dad”