At Member One University, the in-house professional development and training program at Member One Federal Credit Union in Roanoke, one of the recent topics was the American Constitutional Convention of 1787 — James Madison, Benjamin Franklin, George Washington, the whole gang.

They argued, they disagreed, they got mad and, in the end, they came together and produced a document that has withstood the test of time for more than two centuries.

“It was a case study on how to empower team members,” says Scott Crawford, the credit union’s vice president of professional development and training.
It also was another example of Member One’s award-winning program, which uses a humanities and arts-based curriculum to teach business concepts to its employees.

The innovative approach to employee training may be one reason why the company has been ranked as one of Virginia’s best workplaces for four consecutive years.

The credit union is one of 15 companies that have been named Best Places to Work in Virginia every year since 2011. That is when Virginia Business began compiling the list in cooperation with the Best Companies Group, a Pennsylvania-based firm.

We asked 2014 Best Places to Work Winners why their company rocked. Here’s what they said  …

At Member One Federal Credit Union, using the liberal arts to teach business concepts has been a roaring success. Officials say classes typically fill up within a few hours after they’re posted.

But if you think studying the Constitutional Convention to teach team building was a mindbender , you’ll probably want to hear why Member One employees studied Homer’s “Iliad.”

From that, they got lessons in how to give feedback to a manager in a respectful way and how an individual’s excessive pride and unwillingness to listen can sabotage an organization.

Then there was the time Crawford, a former social studies coordinator for Roanoke City Public Schools and a believer in interdisciplinary studies, took Member One’s managers out for a day in the park.

The managers went out to discuss Impressionist painting — and, with colored markers in hand, to make a drawing of their own to illustrate accountability. “This is our normal way of doing business. A lot of leadership is brought in through these classes,” says Kimberley Braswell, Member One’s chief administrative officer.

Something must be working. Since 2008, the year that Frank Carter took over as president and CEO, Braswell says, the credit union has increased assets from $350 million to more than $600 million, with two record years in a row.

Besides its headquarters in Roanoke, the 189-employee credit union has 12 branches throughout Southwest Virginia, and it’s ready for more growth.
Braswell says Member One believes that well-prepared and motivated employees can help fuel that growth. “We have a very strong work-hard, play-hard culture,” she says.

To help employees reach their potential, the credit union has tried to be innovative and creative in all the ways it engages with them.

For example, instead of focusing on a menu of heavy hors d’oeuvres and a tsunami of numbers for its annual meeting, Member One has sought to bring in motivational speakers and leadership specialists to inspire its people.

In past years the roster has included the Disney Institute, the professional development arm of the Walt Disney Co., and Frank Abagnale, one of history’s most famous imposters, and now a security consultant.

His life story inspired the hit movie “Catch Me If You Can.” For Member One employees, he offered a lecture on identity theft.

Braswell says Member One also works to create a close connection with the community, from helping to build Habitat for Humanity houses, to providing school supplies for homeless children and those in poverty.  “We want those children to have all the things the other children have,” Braswell says. “It breaks your heart.”

Every year, Member One employees go into schools to talk with students about the myths and mistakes of handling money, and the importance of budgeting and saving for what you need, not just what you want. “We’ve got a model centered on service,” Braswell says.

Balancing work and play
Every company has its own idea about group events that help build teams. 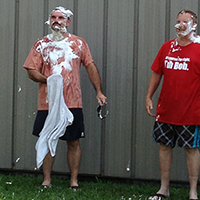 Another Best Place to Work for four years, Damuth Trane, a Chesapeake-based professional energy services company with 192 employees, has an event you’ll find at few other places: dolphin watching. Employees board a boat and sail into the waters of the Chesapeake Bay.

Then there’s the charity event for the Wounded Warriors Project  in which employees pay for an opportunity to throw shaving cream pies at their senior leaders.

Early in a career at Damuth Trane, she gained an insight into how much the family-owned company values work/life balance for its employees.  “My manager knew I was a workaholic. So, he would set an alarm in the office so I would go home,” Mirkle says.

Tailgate parties, ice cream trucks, potluck dinners and blue jean Fridays for charity also are part of the mix at the company.

In keeping with Chesapeake’s connections with the Navy, Damuth Trane employs a naval term — Bravo Zulu — meaning job “well done” as part of its employee recognition program. “The award recognizes people for going above and beyond the call of duty,” Williamson says.

The company hands out Bravo Zulu awards to employees during special ceremonies.

Of course, cold cash is a reward unto itself. The company’s Team Incentive Plan is based on the company’s profitability, and rewards can range from $200 to $1,200 per person.

Workshops, conferences, cross training and job shadowing are all part of the company’s efforts to develop a highly tuned and cohesive work force.

To help employees keep fit, Damuth Trane has a 24/7 on-site fitness center at its main offices.

A less formal fitness activity is the company’s “Green Mile,” a painted walking course in the parking lot.

But people use it for other purposes than fitness, too. “When I’m feeling cooped-up or just want to brainstorm it’s a good place to go,” Mirkle says.

Mirkle says the company’s employee-oriented reputation prompts people in the community to frequently ask her whether there are any job openings.

Damuth Trane’s statement of shared values sets out the company’s business rules and its beliefs: “Treat others with uncompromising truth, lavish trust, mentor unselfishly, give credit where it’s due.”

Close-knit and flexible
In large companies, you’ll probably get the latest company update in an email or a tweet. 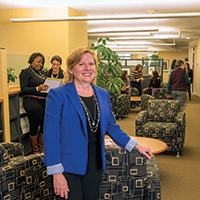 “Our CEO, John Gray, is very accessible. He likes to manage by walking around. If you have a question about why the organization is doing something or why a policy is in place, you can ask him,” explains Linda Caporaletti-Hoyt, senior director of human resources.”

That accessibility is one reason that HDMA, like Member One and Damuth Trane, has been on the Best Places list every year since 2011.

John Parker, the association’s vice president of communications, says that, of the organizations he worked for, HDMA stands out in terms of its collegiality and transparency.

Because so much information is shared through points of contact between people, “We’re all on the same page,” Parker adds.

Caporaletti-Hoyt says the group’s small number of employees also promotes a family-friendly atmosphere that would be difficult to duplicate in a large corporation.

The association’s mission is representing primary health-care distributors who provide the link between pharmaceutical manufacturers and health-care providers.

While an office’s location may not be all that important for many companies, at HDMA it’s a strong recruiting tool. In traffic-challenged Northern Virginia, HDMA is close to a Metro station and Interstate 66.

Caporaletti-Hoyt says the central location appeals to employees — some even ride bicycles to work — who want to spend as little time as possible on a commute.

“The one thing people want is time,” she says. “They love their job, but they want personal time as well.”

Flexible work hours and an opportunity to work from home on an ad hoc basis also contribute to HDMA’s appeal.

But that’s not all.

The association offers a benefit that can be a lifesaver: employees may bring their child to work if a regular caregiver is not available.

The company says it is very flexible in this regard. “My kids requested to come in,” Parker says with a laugh. “They love to come here.”

While in-house training is part of most organizations, HDMA has a particular emphasis on public speaking.

The training extends to its administrative assistants. “Our administrative assistants are known as ‘The A-Team.’ They have a book club where they divide the book into chapters and each one has to present and discuss a section to help expand their business knowledge and improve public speaking skills,” the company says in its Best Places to Work application.

Of public speaking, Caporaletti-Hoyt says, “I think it’s a skill everyone can benefit from. It’s really just a matter of practice.”  She says it’s helped her throughout her career.

Administrative assistants also receive an extra day off for Administrative Professional’s Day, along with lunch and flowers. “They’re a big part of our team,” Caporaletti-Hoyt says.

She adds that HDMA values a sense of humor in its ranks, and promotes fun — such as a March Madness minibasketball shooting contest — to relieve stress and help everyone remain productive.

The association also encourages its employees to be of service in the community.

That can mean working with an organization supporting the homeless, such as A-Span in Arlington, or being part of the Arlington Young Professionals Program, which develops skills for engaging in the community.

“When people feel like they’re giving back to the community,” Caporaletti-Hoyt says, “they also feel good about the workplace.”

Fifteen of the this year’s 100 Best Places to Work companies have made the list each year since its beginning in 2011.

Related story: Happy unbirthday to you