Leidos to partner with Project HOPE to aid Ukraine

As Russia began its invasion of Ukraine in February, Leidos employees took to an internal blog and emailed senior executives to demonstrate support for the Eastern European nation.

CEO Roger Krone remembers one employee who had family in the country and wanted to get them out.

Six months later, the Reston-based Fortune 500 defense contractor has announced a partnership with Project HOPE, a Washington, D.C.-based global health and humanitarian relief organization, forging an ongoing relationship to support the organization’s medical relief efforts in Ukraine, which is still embroiled in conflict with Russia. Much of the world has condemned and sanctioned over the invasion.

“The numbers are horrible: tens of millions displaced, 12,000 civilian casualties,” Krone said in an exclusive interview with Virginia Business from his Reston office this week. “We just felt it was getting the money where it needed to be when it needed to be, and providing the right training and supply.”

The World Health Organization has reported 445 attacks on Ukraine health care resources — which include facilities, transport, personnel, patients, supplies and warehouses — resulting in 105 injuries and 86 deaths. WHO counts 6.2 million Ukrainian refugees across Europe and more than 6.6 million Ukrainians displaced internally. As of Aug. 22, the United Nations’ Office of the High Commissioner for Human Rights (OHCHR) has recorded 13,477 civilian casualties in Ukraine, with 5,587 people killed and 7,890 injured.

Wednesday marks the six-month anniversary of Russia’s war on Ukraine, and it also coincides with the country’s Independence Day. Some Ukrainian cities, including its capital, Kyiv, have banned celebrations or issued curfews amid warnings of the possibility of major new attacks by Russia. The U.S. Department of State urged U.S. citizens to leave the country in a safety alert issued Monday.

Leidos is among a number of Virginia-based companies that have extended support to Ukraine, and the company joined a coalition of aerospace and tech businesses, Space Industry for Ukraine, which raised nearly $1 million by the end of April.

One of the more prominent defense-industry supporters of Ukraine, Krone was named in April to a (largely symbolic) list of politicians, CEOs, scientists and journalists who are banned from entering Russia by Russia’s Ministry of Foreign Affairs. Other Virginia-based government contracting business leaders on the list include Kathy J. Warden, chair, CEO and president of Northrop Grumman Corp.; Phebe Novakovic, chairman and CEO of General Dynamics Corp.; Michael Petters, former CEO of Huntington Ingalls Industries Inc.; and Horacio Rozanski, president and CEO of Booz Allen Hamilton Inc.

Krone said he was a “little surprised” to learn he was included on such a list, adding he’s not concerned by it, and he has no plans to travel to Russia.

“I think if it had been Mary Smith or John Doe was in this job, they would have been put on the list,” Krone said. “I don’t have relatives or relationships that are relevant to being put on the list. I suspect the list was part of a process of just communicating to the U.S. the seriousness of where the Russians were.”

Leidos had already been working with Project HOPE, including making a $35,000 donation and another $25,000 pledged. The new partnership is meant to be an ongoing and evolving relationship and does not have a particular contribution, budget or time frame attached to it, Krone said.

Project HOPE’s founder, Dr. William B. Walsh, was moved by the poor health conditions he saw on the ground in the South Pacific during World War II, just after the atomic bomb was dropped in Hiroshima, when he served as ship’s doctor on a Navy destroyer. In 1958, he persuaded President Dwight Eisenhower to donate a retired Navy hospital ship, the USS Consolation, to Project HOPE. Renamed the SS Hope, the ship functioned as a floating medical center, providing the foundations for Project HOPE’s global humanitarian work.

Project HOPE had worked in Ukraine before the current conflict, but shut down its efforts there around 2017, “thinking that we’re no longer needed,” Torbay said. As Russia’s invasion of Ukraine this year appeared imminent, Project HOPE began preparing teams on the ground in Poland, Moldova and Romania to assist refugees.

“When Russia invaded Ukraine, we responded immediately, sending medicines and medical supplies initially to those countries, then we started programs in addition to the medical supply pipeline that we have,” Torbay said.

Leidos’ initial support for Project HOPE included funds for medicine and medical supplies as well as shipping for those items, initiating mobile clinics and support for refugees, he said.

“Partnerships like Leidos and others as well are critical for us because we depend on donations. We depend on donations generous people, corporations and organizations to donate to our cause, which is built around saving lives and training health workers,” Torbay said. “This is where that partnership becomes very important for us.”

To date, Torbay estimates Project HOPE has spent as much as $8 million on its humanitarian efforts in Ukraine.

The need for medicines and medical supplies remains critical, including for those with chronic illnesses like diabetes, hypertension and heart problems. Mental health for refugees and those who remain in the country also remains imperative, and Project HOPE is also focused on training health workers for the traumas they might not have previously been exposed to treating.

“We’re ramping up the training quite a bit for the frontline health workers, surgeons and orthopedic surgeons that are dealing with war injuries, but also for those that are receiving cases that they didn’t deal with before,” Torbay said. “People that are traumatized.”

While Project HOPE’s partnership with Leidos could mean important and more immediate relief on the ground in Ukraine, it also adds visibility to the organization’s work during a crucial time when headlines about the conflict no longer dominate the news. Not only does it expose Leidos’ workforce of 44,000 global employees to the work of Project HOPE, it could lead other corporations to contribute to humanitarian actions, Torbay said.

“The humanitarian needs are still there, the fighting’s still there, people are still dying, and we will continue working in Ukraine for years to come,” Torbay said.

Because of the likelihood of that ongoing work, the partnership is open-ended. Krone estimated Leidos’ contributions will double what it has already given every six months and “will be substantial.”

“It’s not for us [to say] like, ‘Well, we gave a number, we’re done’ and we move on to the next,” Krone said. “We’ll stay with Project HOPE, probably for a couple of years. I hope I’m wrong, that this goes away and then the Russians and Ukrainians come to a peace treaty and we now have pacification of Eastern Europe … [but] I don’t think that’s going to happen. I think this is going [to last] for a long time.”

Since the early days of the conflict, Leidos, which moved into its Reston headquarters during the pandemic, has lit its top floor with blue and yellow lights — the colors of Ukraine’s flag — in solidarity with the country. That’s generated lots of comments, Krone said, but working with Project HOPE ups the ante.

“We wanted to do something meaningful,” Krone said. “I think showing the colors is important, and everybody can do that. That’s almost too easy. You know, we go flip a switch on the 18th floor and we can change the colors. I think it it sends a message — but I think actual hard dollars to an organization like Project HOPE sends a stronger message.” 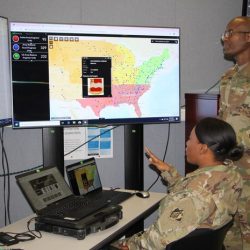