Lara Fritts has resigned as president and CEO of the Greater Richmond Partnership, according to an email sent to the public-private economic development organization’s investors this week. Her resignation is effective as of Nov. 30, and she will be serving actively in the role until that time, according to a spokesperson.

Fritts joined the organization in August 2019. COO Jennifer Wakefield will serve as interim president and CEO as the partnership’s board launches a search for Fritts’ permanent replacement.

Although the email, which was sent by GRP Chair Leslie Haley on Oct. 19, does not disclose Fritts’ future plans, it says that she has “decided to leave GRP to pursue new professional opportunities which better align with her interests.”

Fritts came to Richmond after a long career in economic development, including as director of the Salt Lake City Department of Economic Development, her most recent position before coming to GRP. She also led economic development efforts in Fairfax County, Washington, D.C., Maryland and Wisconsin, and is a Wisconsin native.

Despite the coronavirus’ dampening effect on many economic sectors, the greater Richmond area — including the capital city and the counties of Henrico, Chesterfield and Hanover — was ranked as a top location for Gross Domestic Product in Business Facilities magazine in 2020, Fritts noted in an August email newsletter.

During her tenure, SimpliSafe, the producer of self-installed home security systems, announced a $5.5 million customer support operation in Henrico that would produce 572 jobs. Last October, GlaxoSmithKline, the global health care company that merged with Pfizer in 2019, announced it would expand its presence in Richmond and hire 150 people for a research and development hub.

GRP, which has worked with more than 500 companies that have relocated or expanded in the region, collaborated with the Virginia Economic Development Partnership and the city of Richmond to land the project, which is expected to cost $16.7 million.

Outside of the spotlight, Fritts was credited in Haley’s email with reassessing the partnership’s marketing goals, “outlining how and when GRP would take credit for when projects locate to the region, and reviewing each project to determine if it was truly a new project and then resetting GRP’s goals appropriately.”

“We are thankful for the work Lara has done to help grow our community and to continue to professionalize our economic development organization,” Haley wrote. “We wish Lara continued success in her future endeavors.”

A recently designated Fellow Member of the International Economic Development Council, Fritts was named to Virginia Business’ inaugural Virginia 500 power list in September and spoke about the coronavirus’ impact on the region’s economy in August.

This past fiscal year, Greater Richmond Partnership exceeded its “goals in [economic development] investment,” she said. “We were on a roll, and then we saw it halt. Now we are starting to see activity pick back up.” 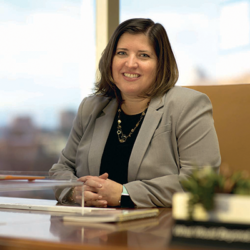