This fall, Danville and Pittsylvania County announced their latest coups.

A manufacturer of high-performance technical fabrics said in October that its U.S. subsidiary would move its headquarters and research and development operations from Greensboro, N.C., to Danville.

BGF Industries Inc., a subsidiary of the France-based Porcher Industries, is investing $7 million to build a 25,000-square-foot facility in the Cyber Park, a 330-acre technology park in Danville’s enterprise zone. The park is owned by the Danville-Pittsylvania County Regional Industrial Facility Authority.

The investment is expected to create 65 jobs during the next three years, with an average annual salary of $75,000.

The company also will establish a U.S. Training Center of Excellence, a new facility with a focus on additive manufacturing.

The Harlow project is expected to create 49 jobs.

The two announcements represent the kind of deals that officials in Southern Virginia are seeing a lot of these days. That trend, they say, is evidence that the region’s innovative workforce programs and long-term planning efforts are bearing fruit.

“This, in my mind, continues to validate the workforce programs we’ve put into place as well as our commitment to the future,” says Matt Rowe, Pittsylvania’s director of economic development.

In the past, companies have considered Danville and Pittsylvania to be low-cost locations with good workforces, but these latest announcements raise the area’s profile, says Rowe. “It validates our blue-ribbon schools and our downtown River District. It’s the next echelon of companies we want to attract.”

Two companies have purchase agreements for locations within the megasite, and the localities are working to bring a major connector road to the park. Already, Berry Hill has 10 credible prospects.

Growing workforce
A new workforce program was key in Amthor International’s decision to stay in Pittsylvania. The largest tanker-truck manufacturer in North America plans to spend $7.1 million to expand its Pittsylvania operations, creating 90 jobs during the next five years. The company also will retain 110 existing jobs. “They have already hired 72 of those 90 folks,” says Rowe.

The workforce program teaches workers Amthor’s precise welding style. “We teamed with Danville Community College’s welding programs and created a training program in welding. If students passed, they were guaranteed an interview with Amthor,” Rowe says.

The first welding cohort had nine students. “Kids going into the program can see a viable career path,” Rowe says, noting the second cohort is double the size of the first. “Average wages are in the upper-$30,000 to low-$40,000 range.”

The company opened its first Virginia manufacturing facility in Gretna in 1992. It is adding 40,000 square feet to its existing 75,000-square-foot facility, which will serve as its corporate headquarters.

Virginia competed against West Virginia for the project. “We wanted to keep them home,” Rowe says of Amthor.

Another existing company, Eastern Panel Manufacturing, a custom plywood manufacturer, announced it would spend $1 million to expand operations and create 15 jobs. EPM moved into a vacant 55,000-square-foot facility in the Chatham Industrial Park, allowing it to consolidate functions. “They were in multiple buildings,” Rowe says of EPM. “They took the building and turned it into a productive economic source.”

The Launch Place has been a marketing boon for the region. The organization, for example, was an angel investor in the startup phase of Panaceutics, a manufacturer of medicinal and nutritional products.

Panaceutics now is moving its operations from North Carolina to Pittsylvania, creating 70 local jobs over three years with an average wage of $58,000.

The company is investing $5.8 million to establish a research and development and high-tech manufacturing facility in the Ringgold Industrial Park. It hopes to start production before the end of the year.

“They have gone from a startup to 27 full-time employees,” Rowe says.

Meanwhile, Piedmont Access to Health Services Inc., a nonprofit health-care organization, is expanding. It is investing $1.5 million in moving its operations to Chatham. The expansion is expected to create 21 jobs at an average annual pay of $56,000.

“It’s been a good 2018. I see where 2019 is starting to shape up to be good, as well,” says Rowe. “We have run out of vacant buildings, and we are now working with developers to come up with new buildings. The market here is so hot now.”

Activity in Danville this year is “very encouraging,” says Linwood Wright, a former Danville mayor who serves as a consultant to the city’s economic development office. By the end of November, he expected the city to have announced “close to 1,000 jobs and on the magnitude of $50 million in investment [for 2018]. I think we will end the year significantly ahead of the prior two years in jobs and investments.”

The city’s metalworking training program is attracting the attention of manufacturers. “The most important incentive we offer prospective businesses is a good supply of trained workers,” Wright says. “Trained workers are in short supply and in great demand.”

Danville also is putting together baccalaureate programs in cybersecurity and information technology at Danville Community College with cooperation from major universities across the state. The program is expected to be in place next year. “We hope to have a similar degree program for applied engineering for advanced manufacturing,” Wright says.

Delegations from Arkansas and Wisconsin visited Danville this year to look at its precision machining training program. “That is where we have tried to separate ourselves from the pack,” Wright says.

Danville hopes the new workforce programs will help it restore its middle class. Like many other historically blue-collar factory communities, the city’s population has declined in recent years. “We’ve lost the middle class, and that’s an issue,” says Wright. “We hope we are unique in that we have addressed our issues and are attempting to deal with them constructively rather than crying in our beer and asking for handouts.”

Danville’s downtown has rebounded with the development of its River District. “We are running 95 percent occupancy with the market-rate apartments that have been constructed,” Wright says. “They are leased before they are finished.”

South Boston in Halifax County also is seeing a revitalization of its downtown. 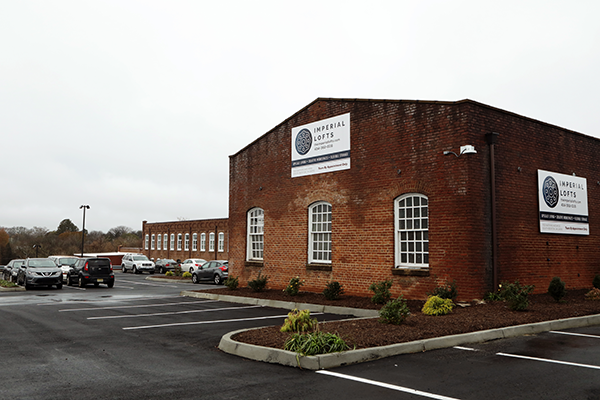 The town partnered with developer Edwin Gaskin of Echelon Resources Inc. to develop market-rate apartments in the 135,000-square-foot former Tultex Building, now called Imperial Lofts. The developer has already built 42 apartments that rent from $800 to $1,100 in about 70,000 square feet of the space.

“He’s got room to add 10 to 12 more,” says Town Manager Tom Raab. “People have started moving in already. We realize there is a demand. It’s a money maker for the town.”
South Boston also is moving forward on plans to redevelop the former John Randolph Hotel building. The town plans to put the project out to bid by the end of this year.
“We hope to break ground in spring or summer of next year,” says Raab of the proposed 27-room boutique hotel with beer garden and rooftop bar. “The project continues to move forward.”

By October, the city and county had attracted projects promising 548 jobs and $79.6 million in investment, the result of “10 years of work,” says Mark Heath, president and CEO of the Martinsville-Henry County Economic Development Corp. “We have been working on the Commonwealth Crossing industrial park for 10 years, and it’s now paying dividends. The economy is better and the tax situation is better as well. We have the lowest unemployment we have had in 15 years.”

In July, Press Glass, the largest independent flat-glass processing operation in Europe, announced it had become the first business to locate in the business park. The Poland-based company will invest $43.55 million to establish a 280,000-square-foot manufacturing operation, creating 212 jobs. Construction is scheduled to begin early next year.

The Press Glass deal is indicative of the large amount of foreign investment the Martinsville-Henry County area is seeing. “Eight of 10 companies that we talk to are international. In general, it’s the vast majority,” Heath says.

The Martinsville/Henry economy is getting a boost from company expansions as well. “We average two-thirds expansions and one-third new companies,” Heath says.

For example, Memphis-based Monogram Food Solutions LLC opened a manufacturing operation in Henry County in 2009 and since then has created more than 600 local jobs. The company announced in September it is investing $30 million to expand its Henry County operation, called Monogram Snacks. Virginia competed against six other states for the project, which will create an additional 300 jobs.

“Our expansion deals are competitive,” Heath says. “You have to treat an existing company like a new company in a lot of ways.”