The sweet spot. That’s what Northern Virginia has become for a number of colleges and universities that train executives seeking to improve their companies.

Executive education in its many incarnations flourished in the executive-rich corridors of Northern Virginia well before Seattle-based Amazon decided last November to establish a second headquarters in Arlington — energizing a region already in hyperdrive.

So, what’s he seeing now?

“We’re observing this trend of multinational and large corporations expanding in this region, and that’s of keen interest to us,” Hinton says.

Perhaps, “keen” is an understatement, considering the recent land rush among state schools to increase their stakes in the D.C. metro area.

Maury Peiperl, dean of GMU’s School of Business, says the federal government side of the regional economy has been reasonably constant.

“Whereas the business part is growing substantially, I think of Amazon as sort of a turning point, a tipping point if you will, of the process that’s been going on for a while,” he says.

Peiperl, who has taught executive education in Europe, now is seeing a trend toward executive-education programs that are not only more focused and shorter, but also often include credentialing in a number of areas.

“You may have an MBA or whatever. But it’s not such a bad thing to have a certificate in data analytics or in government accounting,” Peiperl says.

Darden’s growing presence
One of the kingpins of business education, the Darden School of Business at the University of Virginia in Char­­­­­­­­lot­­­­­tesville, has been steadily increasing its presence in Northern Virginia. Darden’s executive education programs are ranked consistently among the best in the world.

“D.C. has always been a rich space for us. Now, with our physical facility there, things are changing in a significant way,” says Larry Murphy, president of Darden Executive Education and Lifelong Learning.

The Darden facility is the Sands Family Grounds, a 40,000-square-foot space on the top two floors of a 31-story office building in Arlington’s Rosslyn area.

When the Sands facility was established in September 2017, Dean Scott Beardsley said it would “pave the way for Darden to gain a foothold in the D.C. area” that would enable it to accelerate its impact.

Murphy says customized executive-education programs, where Darden faculty contract with companies to provide specific courses based on their needs, have benefited from the school’s new digs in Rosslyn.

“We’ve been able to engage with some companies that see the location of the program in Rosslyn as a significant advantage for them — because many of their employees are located there,” he says.

Company executives also are drawn to the Northern Virginia venue because it provides access to trade or government officials.

“We’re already experiencing an uptick in our interest in the sessions we’re having with clients for doing work in Rosslyn and the Northern Virginia area, because of those dynamics,” Murphy says.

Tech’s 50th year
From its home campus in Blacksburg, Virginia Tech has had a significant presence in Northern Virginia for decades.

This year the university will celebrate its 50th year of offering graduate degrees in the region.

In the years to come, it plans to open a $1 billion Innovation Campus in Northern Virginia to expand the commonwealth’s  pool of technological talent.

But the university also has a stake in executive education in the area. 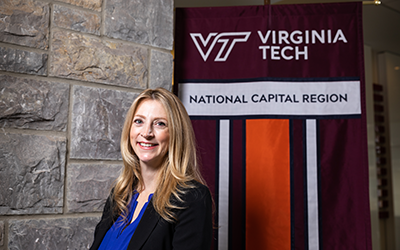 “Continuing and professional education has been operating in the National Capital region for over 10 years,” says Patty Tatro.

The associate director of Virginia Tech Continuing and Professional Education in the region, Tatro says a recently completed survey revealed a skills gap in the Northern Virginia workforce.

“We’re working to close that skills gap by creating noncredit short courses to up-skill employees in the region,” she says. 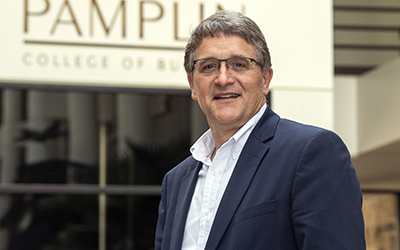 This year, for example, the Pamplin College began a series of professional education programs in cybersecurity, integrated security and entrepreneurship at Tech’s facilities in Arlington.

All of the programs are customized for partners in the region.

In the past, Tatro says, project management was an important professional education program offered in Northern Virginia by Virginia Tech.

But surveys and experience suggested that other courses better aligned the university’s expertise with companies’ needs.

“We’re stepping into spaces as the problems emerge, so as we identify those spaces where organizations have a problem, we’re building agile programming into those spaces,” Carlson says.

Certificate programs
The College of William & Mary in Williamsburg also has offered executive education and other professional programs in the Northern Virginia/Metro D.C. area.

“In the past, we’ve done supply-chain programs [and] cybersecurity programs, and we decided to do a certificate program there,” says Rhonda Barton.

She is executive director of new business development and client relations at William & Mary’s Center for Corporate Education in Williamsburg.

Barton says the college has the ability to provide a mix of programs “depending on the needs of the area, and the feedback we receive,” and to shift its offerings from one area of Northern Virginia to another.