Published May 5, 2022 by Katherine Schulte

In a deal predicted to bring more than 500 jobs and over $100 million in capital investment, the Lambert’s Point Docks property in Norfolk will become a maritime operations and logistics center to support local offshore wind, defense and transportation industries.

The land, owned by Norfolk Southern Railway Co., has been leased by Virginia Beach-based Fairwinds Landing LLC for the next 30 years, the company announced Thursday.

The 111-acre property, which is adjacent to Norfolk Southern’s coal terminal, will be known as Fairwinds Landing, and the limited liability company, which was registered last fall in Virginia Beach, plans to invest more than $100 million in buildings and infrastructure, starting in late 2022.

“Fairwinds Landing will be a critical link in the supply chain supporting our country’s renewable energy goals,” Fairwinds Landing CEO Jerry Miller said in a statement. “We envision this facility will host companies who will bring over 500 new jobs to the area supporting the offshore wind energy industry. This is a generational opportunity to not only help meet our energy needs, but to evolve and grow the economy of the Hampton Roads region.”

“This innovative redevelopment of Lambert’s Point Docks will make Hampton Roads a significant hub for the offshore wind industry. It will attract new businesses and serve existing ones in the region. We are pleased the facility will support current tenants, rail operations and the needs of industrial shippers,” said Kathleen Smith, vice president of business development and real estate at Norfolk Southern.

The project comes as the Hampton Roads region is setting itself up as an offshore wind industry hub. In October 2021, Siemens Gamesa Renewable Energy S.A. announced it would build the nation’s first offshore-wind blade factory at Portsmouth Marine Terminal, where it is leasing property and investing $200 million to build the factory. Siemens Gamesa is partnering with Dominion Energy Inc. on the $9.8 billion Coastal Virginia Offshore Wind project off the shore of Virginia Beach.

Fairwinds Landing covers 111 acres and has 6,000 linear feet of waterfront infrastructure, as well as pier space with more than 30 feet of water depth. It also has deep water access and doesn’t have air draft restrictions. 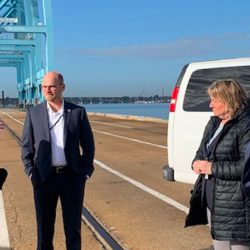