One of the first questions Stephanie Wesolowski was asked when she reported for work at Lynchburg-based Scott Insurance sent her head spinning.

‘They said, ‘What time do you want to come to work?’ I couldn’t believe it,” Wesolowski recalls, marveling at the flexibility she was given.

Scott lets its employees manage the start and end of their workdays to best meet their personal schedules.

That flexibility is part of Scott’s culture that promotes a healthy work-life balance — a philosophy that Wesolowski now preaches as a health risk management specialist in the company’s Richmond office.

Work-life balance has become a major concern among a growing number of employees. The concept is especially strong among members of the Milliennial Generation — those born between 1981 and 2000 — who are exerting an increasing influence in the workplace.

Numerous surveys, including those by Ernst & Young Global Generations Research, indicate that what millennials want most is flexibility in where, when and how they work.

That seems to be borne out by the 2014 survey of 355 organizations’ compensation packages by Mercer, a major human resources and financial services consulting firm based in New York.

In 2008, about 50 percent of organizations included initiatives emphasizing work-life balance as part of their total compensation. Today, the number has climbed to 67 percent.

The surge in the popularity and capabilities of mobile technology, as well as the mass entrance into the workplace of digitally inclined millennials, are part of the explanation, Mercer says.

“A lot of companies, especially those with a younger workforce, are fielding questions about the creation of work-life balance programs,” Wesolowski says. “The younger population is interested in looking at flexibility and time off and working remotely. It’s at the top of their radar.”

Drawing on her 25 years of experience in health and wellness programs, as well as her own life experiences, Wesolowski believes millennials are focused on leading balanced lives partly because of their childhood experiences.

“Both their parents worked. They went to daycare. There was this back and forth, and they didn’t see much balance,” Wesolowski says. “Now, with the introduction of technology, [workers] can go watch a T-ball game and then return to work [remotely].

“Once you see that balance, you see how valuable it is,” Wesolowski says.

Initially trained as a dietitian, Wesolowski places a premium on healthy eating in all its aspects, which to her includes family meals.

“When my kids were very little, my husband commuted to Chicago an hour and a half each way [from their home in the suburbs]. But we had a family meal. We ate together late at night when he came in.

“From a dietitian’s standpoint, family dinner — no matter what — is huge. We view it as sacred,” she said, citing the relationships it can build between children and parents.

She adds that companies seeking a healthy culture build more than just good rapport with employees. A flexible work environment is becoming a key tool to attract top talent and retain employees.

Jenni Lee Crocker, head of Marsh’s Virginia office in Richmond, understands the issue, too, from both a personal and professional standpoint.

She says work-life balance is a frequent topic of conversation among her colleagues at Marsh, a major insurance broker and risk management firm.

At the other end of the spectrum, some employees have aging parents who need extra help.

“For us, the question is, ‘What is the quality of your work product? Did you make a difference today?’ We don’t want to lose an employee over an 8-to-5 day,” Crocker says.

A recent CareerBuilder survey of 1,000 workers in information technology, financial services, sales, and professional and business services found that 40 percent of the respondents work outside of traditional office hours.

Moreover, one in four employees will check on work during activities with family and friends.

Crocker says that using technology to find flexibility in  your work life is an exercise in bargaining with yourself.

“There are days when I feel absolutely tethered by every device,” she says.

But she adds that being technologically tethered is something she can accept if it means she will be able to run her child to a doctor’s appointment.

“I am willing to accept the trade-off,” Crocker says.

However, she says workplace flexibility doesn’t mean working fewer hours than required: “You can’t trade off and say you don’t want to work as many hours,” she says.

A flexible workplace
The Virginia Society of CPAs in Richmond has made work-life balance a key benefit for its employees.

To this end, the society has three initiatives, says David Bass, the society’s director of public relations and communications.

VSCPA offers flexible schedules, the option to telecommute one day a week and a 35-hour workweek.  That compressed schedule allows employees to take a three-day weekend if they work 70 hours in nine days instead of 10.

“It’s one of my favorite perks of working here,” Bass says.

Most employees are offered the telecommuting option, but they are expected to participate in meetings through Internet programs that allow them to be seen or heard from home just as if they were sitting in the office.

Bass says he  is able to participate in volunteer efforts to improve the community. “For me, that’s as important as employment and salary,” he says.

At 38, Bass is part of the “X” generation that came just ahead of the millennials, who he says are on the minds of many members of the society.

A recent CPA roundtable discussion revealed that some Virginia firms are looking at ways to offer more flexible schedules for their employees.

“It’s a cultural, generational shift,” Bass says, and the CPA profession is going through an adjustment period as it strives to attract young talent to the profession. 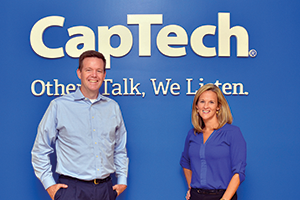 Can a work-life balance be achieved at a hard-driving management and digital consulting firm that’s growing 15 to 20 percent annually?

Some of the top executives at Richmond-based CapTech, which has more than 500 employees, say it’s working for them.

McQueen says he sought a better balance after his previous job at a national consulting firm. The 70- to 80-hour workweeks and travel meant he saw his wife only two weekends a month. “It wasn’t sustainable,” he says.

By focusing more on a balanced life, McQueen says, he was able to participate in the Big Brothers Big Sisters youth mentoring program and hang out with friends and family, while still helping to build a fast-growing company.

Bergeron also piled up hours working for a large national firm, but she changed her priorities after she had children.

She needed to be a mom sometimes. “I had to pick up kids,” she says.

And that meant leaving work earlier sometimes to be home, then catching up on work at night if the project needed her.

“We hire people who can manage their time,” Bergeron says.

Bergeron and McQueen tell their work-life balance stories to prospective employees who want to work hard but also seek balance in their lives.

Bergeron says CapTech’s flexible work environment is reflected in its 12 to 15 percent employee turnover rate, which, she says, is about half of what many other companies in their industry experience.

In 2014,  Consulting Magazine’s “Best Firms to Work For” list ranked CapTech sixth overall for large firms while also taking the top spots in meeting client needs and in career development.

McQueen says the part of work-life balance he’s working on now is being able to “turn off my brain” when he’s away from work.