It is not easy being a new college student, says Troy Paino, the president of University of Mary Washington.

“We’re living in this age of acceleration,” he says. Technology is creating new careers and erasing others. “Change is so rapid … It is overwhelming in some respects, and it is overwhelming to the 18-year-olds who are arriving on our campus.”

In many ways, the same is true for new college presidents like Paino, who arrived just a year ago, becoming UMW’s 10th president in July 2016. He is charged with steering the school through the uncertain environment of higher education. That task includes producing graduates who can adapt to change while keeping the school afloat financially amid dropping state support for public universities.

Those challenges aren’t unique to UMW; all of Virginia’s public colleges have faced budget cuts. And then there’s the task any school faces: convincing students and their parents that a degree is worth the money.

The school has a good foundation. Mary Washington is well-regarded academically, with a tree-shaded campus in Fredericksburg on the same high ground that played a role in the Civil War. The university routinely gets high rankings from various publications. The 2017 edition of the “Fiske Guide to Colleges” named it a “best buy,” one of just two Virginia schools to get that designation. The school has about 4,100 undergraduates, with a student-faculty ratio of 14 to 1.

In addition to the Fredericksburg campus, UMW has two smaller locations — one in Stafford County, which provides midcareer development programs for professionals, and a second site in King George County near the Naval Surface Warfare Center in Dahlgren. The Dahlgren center focuses mostly on science and engineering studies, and UMW shares the space with educators from other Virginia schools. 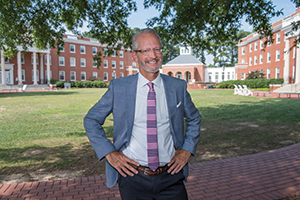 Paino came to Mary Washington from Truman State University in Kirksville, Mo., a school of 6,200 students where he had served as president for six years.

UMW is continuing its push toward a “digital liberal arts” education. “It is an integration of technology into traditional liberal learning,” says Jeffrey McClurken, who in May was appointed by Paino as a special adviser. A 1994 Mary Washington graduate who later studied at Johns Hopkins University, McClurken has been teaching at his alma mater since 1999. “It’s not about learning a particular platform or platforms, it’s about trying to figure out, when you’re faced with a problem in the digital age, how to solve it,” he says.

In 2013 UMW began a program called Domain of One’s Own (DoOO), the name being a riff on Virginia Woolf’s 1929 essay “A Room of One’s Own.” DoOO provides a domain name with hosted web space to everyone in the UMW community — students, faculty and staff. So far, about 2,000 domains have been created. The service is free to students during the time they’re enrolled. When used as intended, domains can serve as students’ digital presence no matter their career paths. “When students graduate, they can take that domain name with them. It’s their work,” McClurken says.

The DoOO project is a creation of the Division of Teaching and Learning Technologies, which works out of the Hurley Convergence Center, an “academic commons” building that opened in 2014. It is named for Richard V. Hurley, UMW’s previous president who retired last year after 16 years at the school serving in several senior administrative positions. He was UMW’s president for six years.

The convergence center is at the heart of an effort to mesh traditional liberal arts and the fast-changing digital environment. Squeezed into the hillier west end of the campus, the building has 77,000 square feet of space devoted to technology. It has, for example, an advanced media productions studio, a multimedia editing lab and the Digital Knowledge Center, where students can get peer tutoring for class projects or personal pursuits.

“Part of what we’re trying to do is develop what I think of as a curriculum and a digital fluency,” McClurken says. That curricula will be integrated into the first-year seminars that new students attend. Faculty members also are being trained to integrate digital skills in their courses. The Hurley center has five “instructional technologists” who work with faculty, McClurken says.

Two years ago the university created a new major, communication and digital studies. “It’s absolutely the fastest-growing” major at UMW, with 100 to 120 students pursuing that course of study. The major includes a lot of areas of study, but in general it concerns “developing a mindset on how we analyze and present information in the digital age,” McClurken says. 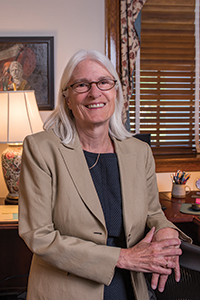 With a new president, the university also has a number of new faces. In July, Nina Mikhalevsky became its new provost, the chief academic officer. She holds a tenured position as a philosophy professor at UMW. Starting this fall, Kimberly Young will be the new director of Continuing and Professional Studies. She headed executive education and executive MBA programs at the Henry W.

Bloch School of Management at the University of Missouri-Kansas City.

Young’s work at UMW’s campus in Stafford County is part of Paino’s effort to expand the university’s footprint in the region’s business community. At the Dahlgren campus, the Commonwealth Graduate Engineering Program offers online and video-interactive teleconference courses in 12 disciplines. The campus also offers undergraduate classes.

These satellite campus programs serve a different need than the main campus, Paino says. They offer post-graduate programs to people in the middle of their working lives. The programs also are essential to UMW’s value in the regional economy. The presence of major military installations in the area means there are thousands of military personnel and defense-contractor employees looking to advance their careers.

The foundation’s investments are intended to produce “substantial revenue” for the university’s operations, Rountree says. “We’re talking about millions of dollars in annual revenue, once we get some of our major debt packages paid down over the next 15 to 20 years.”

The foundation owns and operates 11 real estate companies. In 2007, for example, it bought a shopping center next to the campus, along with a pair of adjacent properties, and created Eagle Village, a 23-acre, mixed-used project that includes a Hyatt Place hotel, office space and apartments.

In 2002 the foundation bought a six-acre property directly across the street from the main campus. Its 125 garden-style apartments currently house 350 students. Paino says the school is working on plans to tear down those apartments and build residential space for students along with some mixed-use development. The property is on William Street in downtown Fredericksburg, which is a main corridor for the city.

Paino says a real estate project like that can be good for the city and the school, in terms of revenue. “We have over the past 15 years gotten less and less state support” and that trend will continue, he says. That financial pressure is turning schools like UMW into real estate developers, he says. “I think the schools that can do this and do it successfully are the ones that are going to thrive in the 21st century.”

University of Mary Washington facts at a glance