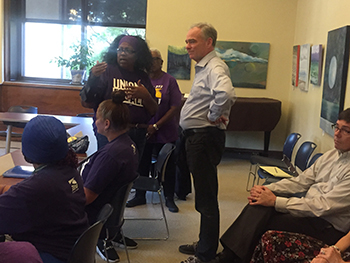 U.S. Sen. Tim Kaine met with home health-care workers and others involved with direct care Friday in Richmond, one day after he and other lawmakers introduced a House and Senate bill to invest in training and advancement for people who provide assistance to aging patients and others with chronic care needs.

“Our population is aging, and there’s a growing demand for care,” Kaine said in a prepared statement Thursday. “Direct care workers provide critical assistance to older Americans, people with disabilities and others with chronic conditions. We need to do what we can to support their important work — including recruiting and retaining care workers but also providing opportunities for their advancement.”

According to the Bureau of Labor Statistics, more than a million more direct care workers will be needed by 2024, while Lee estimated the need could skyrocket to 5.2 million more workers, as baby boomers age.

On Friday, Kaine noted that his father-in-law and mother-in-law, former Virginia Gov. Linwood Holton and his wife Jinks, are in their mid-90s and receive direct care, as does another family member who was diagnosed with early on-set Alzheimer’s a decade ago.

“As we are aging, direct care will be a huge part of our society,” Kaine said. As governor, he noted, his administration opened the Service Employees International Union to direct care workers. Several members of the Virginia SEIU chapter spoke Friday at the roundtable discussion held at Richmond’s main library.

Many talked about low pay — ranging from $8.50 an hour to $15 or $16 an hour for a licensed nurse. Cassandra Wilson, who lives in Chesterfield and is a licensed practical nurse, suffered a back injury and had to take a second job to make ends meet, she told Kaine.

Wilson also has a 26-year-old daughter with cerebral palsy for whom she cares, but they had to wait 13 years for a Medicaid waiver, which Wilson received only after her injury.

“It’s just been frustrating,” she said.

Meanwhile, Dawn Beninghove, who started Companion Extraordinaire Home Care Services in 2003 in Ashland, said she’s had to make hard choices to pay her employees $12.40 an hour, including turning down new clients on Medicaid beginning in 2013.

“I almost went under,” Beninghove said, when she accepted Medicaid reimbursements, which differ by state and region. In Northern Virginia, the reimbursement rate is now $17.66 an hour while it is $15/hour in the rest of the state. With clients on private insurance, Beninghove receives an average reimbursement of $22 an hour. This way, she’s able to offer employees short-term disability payments and overtime.

Nonetheless, it is very hard to attract and keep good direct care workers, said John Jones of Family Life Services LLC, a Henrico-based group of six residential care facilities. Charlene Fox, a nurse who owns the business, said most of her employees are single mothers with multiple children and qualify for Medicaid — unless they work too many hours and are disqualified by income.

“I’m at the maximum of the hours I can get,” said Lauralyn Clark, who takes care of a woman who has suffered multiple strokes. Clark wore an arm brace Friday after tearing a ligament while trying to lift her client, who fell in the bathroom. At least now, Clark noted, she can visit the doctor because she has insurance through Medicaid.

Kaine said that concern about recruiting and retaining home health-care workers is a bipartisan issue and that he expects Republicans in Congress to support some of the ideas in the bills.

Survey finds Virginia to be leader in health IT