Jerry Falwell Jr. has dropped his defamation lawsuit against Liberty University, saying in a statement Thursday that he has decided “to take a timeout” from the suit while keeping his options open.

Falwell sued his former employer Oct. 28 in Lynchburg Circuit Court, claiming that the university made defamatory statements about him in the wake of his resignation as president and chancellor of the private Christian institution in August. He sought punitive damages and attorney’s fees from Liberty, as well as a trial by jury. However, at a Dec. 9 hearing, a Lynchburg judge ruled on Falwell’s motion to drop the suit.

“I’ve decided to take a timeout from my litigation against Liberty University, but I will continue to keep all options on the table for an appropriate resolution to the matter,” Falwell said in a statement provided by spokesperson Mark Serrano, president of Leesburg-based ProActive Communications.

Judge James F. Watson granted Falwell’s motion Wednesday to drop the suit without prejudice, which will allow Falwell to refile the suit in the future if he wants.

Liberty issued a statement Thursday afternoon: “Falwell’s unilateral and voluntary dismissal was not prompted by any payments, promises or other consideration from Liberty. The university’s administration and Board of Trustees are pleased that Falwell has dropped his lawsuit and look forward to pressing onward with the work of Liberty’s President and Chancellor Search Committee to find the new leadership to succeed Falwell.”

The 29-page suit filed in October claimed that Falwell’s former business partner, Giancarlo Granda, who had a highly publicized affair with Falwell’s wife, Becki, conspired against Falwell with “politically motivated backers,” including the political action group The Lincoln Project, which opposed President Donald Trump during the 2020 election. Falwell is a prominent supporter of Trump, whom he endorsed in 2016.

Liberty was the only party listed in the suit, in which Falwell also sought damages for breach of contract, but the suit also alleged misdeeds by Granda and The Lincoln Project.

In the suit, Falwell claimed that he and his family were “victims of an ongoing extortion scheme” by Granda, a former pool attendant and business associate of the Falwells who said in interviews with Reuters this summer that he had engaged in a long-term affair with Falwell’s wife, Becki, with the full knowledge of Jerry Falwell Jr. Granda alleged that Falwell sometimes watched Granda and Becki Falwell having sexual relations, an accusation that Falwell has vehemently denied. Falwell acknowledged in earlier interviews and within the lawsuit that Becki Falwell engaged in an “inappropriate relationship” with Granda, whom the Falwells met in 2012 while staying at the Fontainebleau Miami Beach hotel.

Granda, Falwell claimed in the suit, is represented for free by Kurt Bardella, president of Arlington-based media firm Endeavor Strategies and a senior adviser for The Lincoln Project. Bardella is arranging Granda’s press interviews and advising him, according to Falwell’s lawsuit, which also stated that Granda’s attorney, Aaron Resnick of Miami, introduced him to The Lincoln Project personnel and has also been financing Granda’s personal expenses.

“There is no connection to The Lincoln Project,” Granda wrote in an email to Virginia Business in October. “I have received no financial compensation – none – for coming forward and telling the truth about the long-term affair with Becki, … Jerry’s hypocrisy and the Falwells’ abuse of power.

“Jerry is attempting to portray himself as a victim. No one should be fooled. The real victims are the Liberty University students, faculty and staff who have been intimidated into silence under his tenure. … I stand by all my statements.”

Falwell also accused university representatives of “not only accept[ing] the salacious and baseless accusations against the Falwells at face value, but directly participated in the defamation.” He further alleged that “certain key individuals” at the university — whom he did not name — were “fulfilling a long-held goal’ to end Falwell’s 32-year career at the university that his father, the late Rev. Jerry Falwell Sr., founded in 1971.

Falwell resigned Aug. 25 as president, chancellor and member of the university’s board of directors, after a 13-year tenure as leader of the university. Jerry Prevo, an Alaska pastor who served on Liberty’s executive committee and was most recently its chairman, is currently the interim president while a search is underway for Falwell’s permanent replacements as president and chancellor.

Falwell, who received his J.D. from the University of Virginia School of Law, served as the university’s legal counsel before taking over the helm as president in 2007 after his father’s death. Under Jerry Falwell Jr.’s leadership, the school became one of the largest Christian universities in the world. With more than 110,000 students enrolled, most of them online, Liberty is Virginia’s largest school by enrollment and is the nation’s second-largest online university, behind the University of Phoenix.

Falwell is broadly credited for bringing Liberty out of deep debt to its current financial strength, including a $1.59 billion endowment as of 2019. The university also completed more than $1 billion in construction projects and built an impressive athletics program.

However, Falwell was at the center of multiple controversies in 2020, starting with his decision to invite students back to campus following spring break despite the start of the COVID-19 pandemic. He then offended Black students, faculty members and other supporters by making a joke on Twitter referring to Gov. Ralph Northam’s mask mandate and 2019 blackface scandal. He eventually apologized for posting a picture of a mask with the offending image, but several Black Liberty students and staff members resigned or left Liberty as a result.

In August, Falwell briefly posted an Instagram photo of himself and his wife’s assistant in which their pants were unzipped during a yacht party. In the photo, Falwell is holding a glass of dark liquid that looks like an alcoholic drink, but Falwell joked in the caption that the drink was “black water” and “a prop.” That was the last straw for many supporters, and Falwell went on an indefinite leave of absence. A Reuters interview with Granda, who spoke on the record about his affair and other allegations, was published in late August, leading to Falwell’s resignation a day later.

Falwell was paid approximately $2 million in severance by Liberty University, which also announced it has launched a third-party investigation into financial and real estate dealings at the university during Falwell’s tenure as president. The public accounting firm hired to conduct the probe, Baker Tilly US, has made available through Dec. 20 an encrypted website to allow anonymous whistleblower complaints focused on financial misconduct by “current or former members of university leadership.” 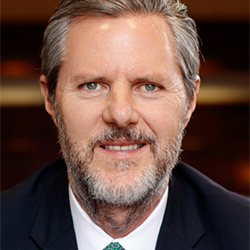