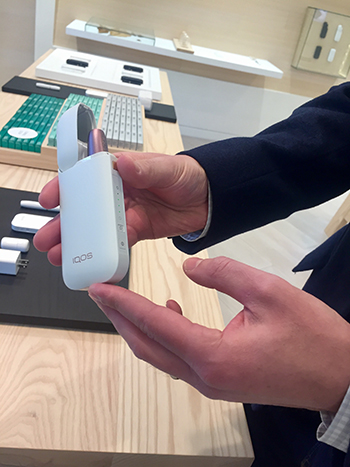 In a minimalist-chic storefront in Richmond's Carytown shopping district, Henrico-based Altria Group and Philip Morris USA are launching their second U.S. market — and the first in Virginia — for the IQOS heated-tobacco device on Saturday.

With its light wood-and-glass displays of multicolored holders and other accessories, the IQOS (pronounced eye-kōs) boutique at 3402 W. Cary St. resembles a cell phone shop or perhaps an Apple Store. It conveys a sense of respectability, avoiding the neon lights, funky logos and dark walls common among the vape shops that have popped up across the state in recent years.

That’s by design, as Altria Group and its Philip Morris USA subsidiary are marketing the product to current smokers over the age of 21 — not to teens or to nonsmokers of any age, company officials emphasized Friday during a media preview for the Richmond IQOS store. Customers will be carded at the door to make sure they’re 21 and salespeople will ask if they’re current smokers.

The system, which retails for $80, includes an IQOS holder, the electronic device that heats a cigarette-like tobacco stick called a “HeatStick,” a charging device and plug, and 10 packets containing 20 HeatSticks each. Packaged in Marlboro-branded packs, HeatSticks come in two flavors: regular tobacco and smooth menthol, soon to be joined by fresh menthol.

“That’s what the FDA has authorized,” said David Sutton, director of media affairs at Altria Group. “It’s not an e-vapor or e-cigarette product.”

In other words, the heated-tobacco product will not feature any of the fruit or candy flavors that have been blamed for luring underage vapers, particularly products sold by the San Francisco-based Juul Labs Inc., in which Altria holds a 35% stake.

IQOS, by contrast, is “not significantly appealing to youth or to nonsmokers,” according to a statement from Philip Morris International Inc., which sells the product in more than 50 markets worldwide. Through an agreement with PMI, Altria has exclusive commercial rights to the IQOS system in the United States, and PM USA is responsible for marketing and sales here.

More than 8.8 million adult smokers in overseas markets have fully switched to IQOS, said Corey Henry, director of United States communications for PMI. It was a two-year process to bring the product to the U.S. market this year, including a large chunk (which Henry declined to specify) of the companies’ $6 billion budget dedicated to research and development of non-cigarette products.

In October, Altria and Philip Morris USA launched its first IQOS store in Atlanta. Richmond is the second U.S. market. 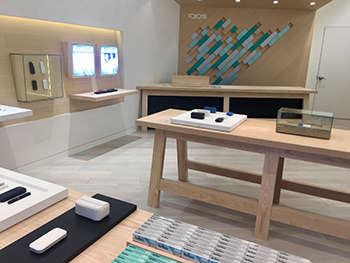 In its approval, the Food and Drug Administration said that IQOS produces “fewer or lower levels of some toxins than combustible cigarettes,” although the companies are prohibited from making any health claims yet about the device’s impact compared with that of cigarettes. The FDA is still considering an application submitted for IQOS in December 2016, a year before its sales application was submitted, Sutton said.

Boxes of HeatSticks will cost about $5.75 each in Richmond, roughly the same as a pack of cigarettes. HeatSticks “closely mimic the cigarette-smoking experience,” with a blend of three types of tobacco, Sutton said. Although the boutique will be the only location locally where customers can buy the device, soon there will be 170 retail locations — such as 7-Eleven, Wawa and Sheetz — where customers can buy packs of the HeatSticks.

Specific retail locations are still under discussion, Sutton said, as the company wants to hear Richmond-area customers’ preferences, but over the past couple of months in Atlanta, he noted, “We’ve had a lot of adult smoker interest.”