Stumping for a seat on Virginia Beach City Council in 2014, Ben Davenport drew puzzled looks when he talked about making the city a hub for the burgeoning data-center industry.

“At town hall meetings, I said the city needed to attract data centers and become a technological ecosystem,” Davenport recalls. “People looked at me like I was crazy.”

Nonetheless, Davenport won the election and became chair of Hampton Roads’ first broadband taskforce. The group has been cataloging the region’s tech assets and exploring opportunities. Now a candidate for mayor of Virginia Beach, Davenport is touting the city’s ascension as a digital port.

“A lot of times people talk about our region as somewhat of a cul-de sac,” Davenport says. “But with our coastline, we’ve become a viable alternative to New York/New Jersey and South Florida as a cable landing site.”

In fact, subsea cables are making their way across the Atlantic and landing on Virginia Beach shores. Microsoft, Facebook and Telxius, a Telefonica subsidiary, teamed up to install MAREA, a 4,000-mile, super-speed internet cable stretching from Bilbao, Spain, to just off Camp Pendleton in the southern end of the resort area. It went into operation last year.

Trumpeting the city’s new status as a digital port, officials are negotiating to land additional cables. “We will be one of the most connected cities in the U.S.,” Davenport predicts.

That designation is attractive to companies that transmit large amounts of data, including those in financial services, data-analytics, biomedical and cybersecurity. “Virginia Beach is one of the most aggressive cities in the U.S. in pursuit of data centers,”

Davenport says, noting that the city is the only cable landing site between the New York/New Jersey region and Florida. “Virginia Beach is a very pro-business city. We’ve tried to remove as many hurdles as we can.”

Diversifying the economy
City Council has done its share to clear the way for data centers, creating incentives such as reduced business property tax rates on computer and peripheral equipment, rebates on business license taxes and reimbursements for development and water and sewer connection fees. The city also is working with the U.S. Department of Defense to establish the first U.S. offshore cable protection zone for transatlantic telecommunication cable landing locations.

The city’s drive to attract new industries could help diversify a regional economy long dependent on tourism, the military and defense spending. “This is very exciting for Virginia Beach and Virginia,” says Warren Harris, Virginia Beach’s economic development director. “We see us as a significant gateway for the movement and transmission of data in a way that has never been experienced before.”

The 325-acre Corporate Landing Business Park, located on the southwest side of Naval Air Station Oceana, has emerged as the prime location for data centers. Fitted with an ultra-high-speed network infrastructure and fiber-access hubs, the park is a Dominion Energy-certified data center site, the only one in Southeastern Virginia.

“This corridor of the city is poised to be the host of a number of potential investments regarding data centers and potential data center development,” says Harris. “It’s opened a whole new industry for Virginia Beach and the region. Data centers support almost all businesses.”

Globalinx Data Centers is also moving into Corporate Landing. The homegrown company expects to complete a 150,000-square-foot data center this fall that will include a large “meet-me room” of interconnections from cable-service providers. Globalinx also will be the first in the city to offer network providers and other businesses direct access to the subsea cables landing in Virginia Beach.

“There will be opportunities for local businesses to utilize our facility in a secure, non-redundant environment,” says Greg Twitt, the company’s founder and president. “Instead of having their own server rooms, they will utilize ours. The amount of private providers that can connect into our facility to take advantage of the subsea cables will help create an ecosystem.”

Twitt believes that Virginia Beach can secure a prominent spot on the digital map. “We’re extremely well located in the mid-Atlantic,” he notes. “Storm-wise, we’re in a very safe area — much safer than where a lot of subsea cables come in such place as Miami and Jacksonville, Fla.” Other advantages, according to Twitt, include lower land prices, a good, continuous electric supply and a receptive local government. Plus, the city is less than 200 miles from Ashburn’s “Data Center Alley” in Loudoun County and just over 100 miles from Henrico County, where Facebook is investing $1 billion in a data center.

“We would like to be the alternative that subsea cables can look at instead of New York, New Jersey and Florida,” Harris adds. “If you do business with Europe, South America or South Africa, it’s beneficial to be in Virginia Beach to connect with those continents.”

The ‘tip of the iceberg’
All of this makes for an exciting time in Virginia Beach’s 55-year history as a municipality. In addition to being a landing site for subsea cables, the city is upgrading its broadband infrastructure to support the next generation of telecommunications systems. The city’s 126-linear-mile municipal fiber network offers connectivity throughout Hampton Roads. With the super-speed connections, Harris expects Virginia Beach will see a significant amount of additional capital investments along with advanced-technology jobs.

“This is a unique emerging ecosystem,” he says. “This is the tip of the iceberg with regard to multiple economic benefits.”

The city also is partnering with the Center for Advancing Innovation on the VABeachBio Innovation Challenge. Focused on enhancing the city’s biomedical ecosystem, the challenge will launch startup companies striving to improve the health of military veterans. City officials say the program could lead to the creation of approximately 2,000 knowledge-based jobs. 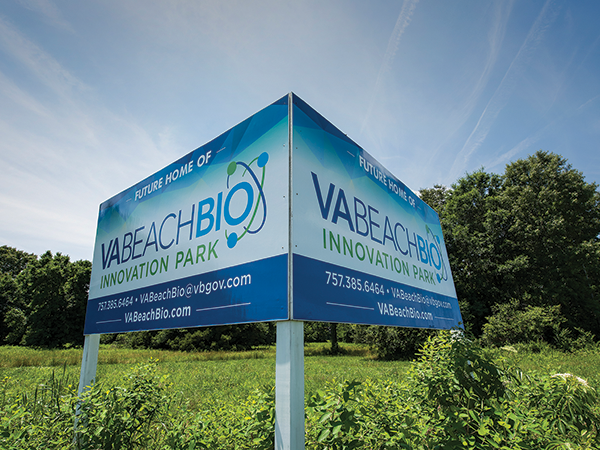 Many of those jobs would be based in the new VABeachBio Innovation Park. The 155-acre site is near health-care, biomedical and educational facilities, including Sentara Princess Anne Hospital, LifeNet Health, Operation Smile, the Virginia Beach Advanced Technology Center, the Virginia Beach campus of Tidewater Community College and the Virginia Beach Higher Education Center, which provides on-site classes through Old Dominion and Norfolk State universities.

Old Dominion will expand its footprint at the higher education center this fall by introducing upper-level undergraduate and graduate courses in nursing and the opening of the Center for Telehealth Education and Research. The programs will complement the university’s health-sciences offerings at its Norfolk campus. 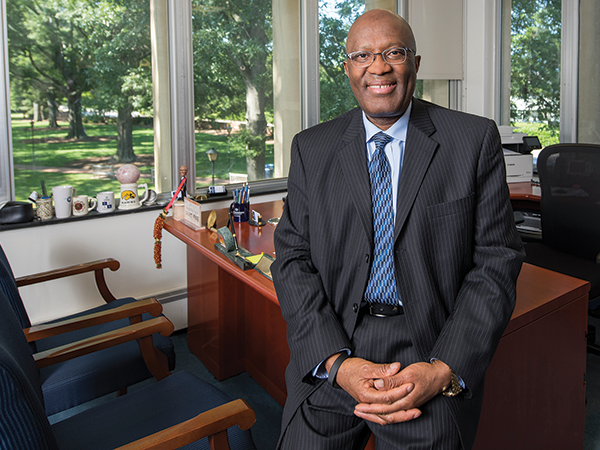 With the growing biotech presence in the city, the timing is right to boost ODU’s health-science offerings, says Austin Agho, the university’s provost and vice president for academic affairs. “On average we receive 300-plus applications a year for the nursing school, but we can only admit 60 to 65 students. With the expansion, we will be able to increase the class size to 80.”

ODU also is working with the city to secure a location for a clinic offering primary-care services, speech and physical therapy, and mental health counseling for students and the public. “It will be a site for students to gain hands-on training and for faculty to conduct research,” Agho says.

Officials believe the expanding education offerings and the city’s technological strides will help Virginia Beach solidify its reputation with high-tech industries. “This is the start of attracting 21st-century industries,” Davenport says. “We are showing that we can be successful. We are extremely agile and aggressive, and people are taking notice.”