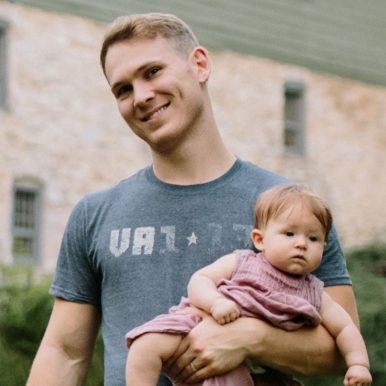 In 2017, Lex Avellino started a design studio specializing in 3-D animation and computer-generated imagery. As the studio dove into technology, it birthed Passage, a metaverse company that has created a platform for 3D immersive experiences that can be streamed on a browser. Passage plans to launch its product to the public in early 2023.

Avellino calls Passage an “anti-platform”; its blockchain elements create a passageway to connect to other platforms and opportunities for virtual experiences. Passage has hosted virtual events for Amazon.com Inc. and Capitol Records and in February 2023 will host the virtual Knostalgia hip-hop/martial arts festival,
featuring RZA from Wu-Tang Clan.

In 1969, Bernie Cosell was a computer programmer based in Boston, one of three people who programmed processors that allowed the internet’s precursor — the ARPANET — to work, launching the digital age. In 1992, Cosell and his wife were both ready to retire. They landed in Giles County, which reminded them of New Zealand, where they had vacationed. Fantasy Farm is not a business, Cosell maintains. “It’s basically a retirement home for old sheep. They’re happy every day of their lives.” Ironically, Cosell now lives with less-than-optimal internet access. “The internet I have right now is cell phone-based,” he says, but adds, “Almost everybody could get by with a much less fast internet connection if it were unlimited data.” 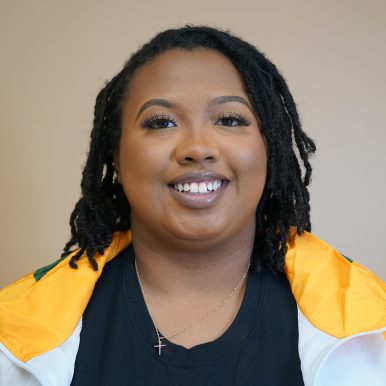 When browsing Norfolk State University’s bookstore, Ashley Jones realized it lacked what students wanted: trendy streetwear. In 2017, two years after graduating, she founded Tones of Melanin to fill that gap for students at historically Black colleges and universities. She now makes and sells apparel sold through HBCU bookstores, Fanatics and some major retailers. Jones was suspicious when she received an Instagram message from a Belk representative in March 2021, but it was legitimate — Belk now carries her apparel, as does Dick’s Sporting Goods. Although she’s proud to be one of the first Black woman-owned businesses whose products these retailers carry, she didn’t plan to trailblaze: “I just wanted to make some different stuff. … It was just like, I want to be able to rep my school.” 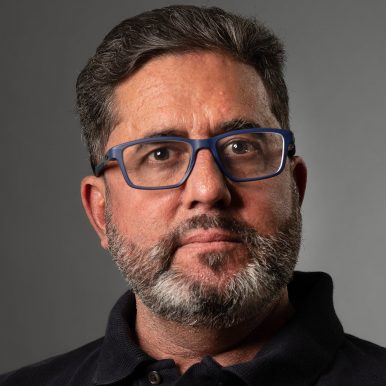 Philip Karp went from working as a director for Office Depot Europe to joining Shenandoah Growers in 2009 and becoming president of the controlled environment agriculture company in 2016. Last year, he oversaw the company’s name change to Soli Organic, better mirroring its mission of producing organic produce for more than 20,000 stores.

“It was time for a brand to tell people who and what we are, that embodies what we value as an organization,” Karp says.

If you ask Karp, working for a company that grows organic produce isn’t all that different from selling office supplies. “At the end of the day,” he says, “my true passion is for innovation and the consumer.”

A Crozet resident, Karp is a wine and food enthusiast who also enjoys birding and travel. 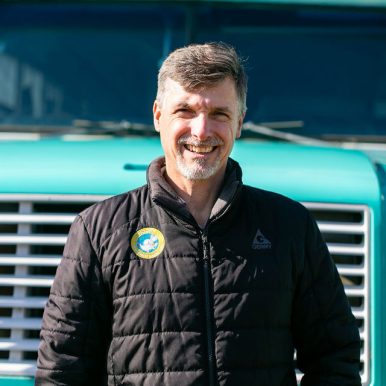 After leaving the packaging industry, Jeff Kellogg took a year off, researching, before he decided to enter the pet market. In 2016, he launched Woofy Bus LLC, which transports dogs to and from his day school, Woofy Wellness Ranch LLC. “We focus on teaching rather than disciplining,” which is what makes Woofy Wellness different, Kellogg says. The company also coordinates services like grooming and vet care during the day. “It’s an honor and it’s a privilege” to care for people’s dogs, Kellogg says. “That sounds kind of corny, but it really is.” The current roughly 150-dog facility has space to expand, but Kellogg is also looking at opening another Richmond-area location and two in the mid-Atlantic, outside Virginia, in 2023. 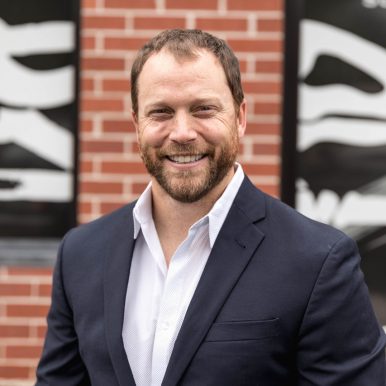 Sean Matson co-founded Matbock in 2010, while he was on active duty with the Navy, serving as a commissioned officer with the SEALs. He spent 13 years in the sea service.

Matbock works to develop better gear and technologies for warfighters, law enforcement and first responders. The company jumped from No. 1,033 to No. 805 on Inc. 5000’s list of fastest-growing companies in 2022. Matson also co-founded CardoMax, a vitamin and energy supplements company.

Inside its Virginia Beach office, Matbock has hung one of its early products, a lightweight, convertible stretcher that was used to carry a SEAL out of a firefight in Afghanistan.

“I want my work to make an impact,” Matson says. 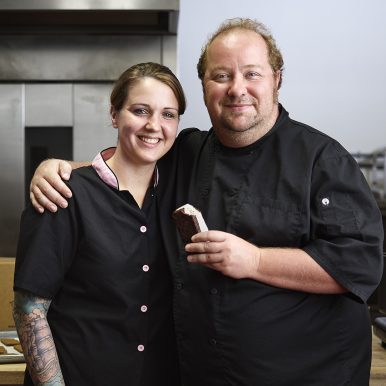 For many of us, ice cream sandwiches traditionally had only one form: a brick of soft-serve vanilla ice cream between thin, brown chocolate-ish cookies. But Hannah Pollack, who created the first Nightingale treat as an executive chef, has boosted the ice cream sandwich’s sophistication level and profile, collaborating with her husband, Xavier Meers, who also is a chef. They started the company in 2017 and have expanded sales to the East Coast, Texas and California. Flavors range from “Fat Banana” — banana ice cream with peanut butter cookies, dipped in chocolate — to “Nicky’s Blondie,” a vanilla-honeycomb ice cream concoction created with heiress Nicky Hilton Rothschild, with proceeds benefiting a food bank. Tuna melt connoisseur U.S. Sen. Mark Warner is also a fan. In 2023, the couple plans to expand their Richmond production facility from 5,000 to 20,000 square feet, but Pollack says they are sticking with ice cream sandwiches, not venturing into other products. “We do our own cookies, we do our own ice cream — it’s really important to us to control the quality ourselves.” 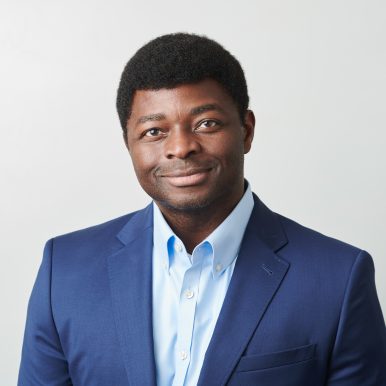 Dr. Ikenna Okezie co-founded Somatus in 2016 to provide integrated kidney care after he saw racial disparities and inequities in care while he was working at DaVita Inc. Somatus partners with health care providers and helps patients between clinic visits, including having care workers teach patients how to monitor their diseases daily and arranging transportation. Okezie has a medical degree and an MBA from Harvard, and his degree programs overlapped for a year. Somatus is partnering with the Centers for Medicare & Medicaid Services’ Office of Minority Health and Johns Hopkins Center for Health Equity to study the effect of social determinants of health on kidney care. Somatus will serve more than 150,000 people across 34 states by the end of 2022. 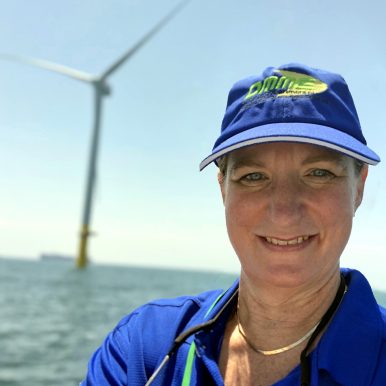 Formerly chief deputy for the Virginia Department of Energy, Jennifer Palestrant continues to talk up Hampton Roads as an ideal location for offshore wind energy. People here really know large-scale maritime projects, she says: “Doesn’t matter whether it’s an aircraft carrier, a wind turbine or a submarine, we do it better than anybody else.”

Now director of business development for offshore wind for the Americas for Fugro, a Dutch geospatial intelligence provider specializing in offshore wind development, Palestrant consults with developers and government officials to ensure their projects are successful. “In the next 30 years, you will see offshore wind off the coast of every continent around the globe,” she says. 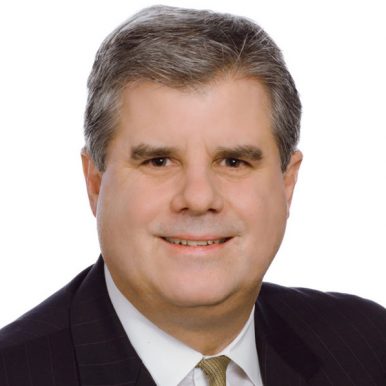 Kevin Pomfret, who leads Williams Mullen’s unmanned systems and cybersecurity teams and teaches geospatial law and ethics at Johns Hopkins University, started out as a satellite imagery analyst before becoming an attorney. In May, he was named Geospatial Ambassador of the Year at the Geospatial World Forum, an award he received in part for “his evangelism and advocacy for legal and policy frameworks” for the collection and use of geospatial data, as well as privacy and national security. He’s also writing a textbook on geospatial legal issues in 2023.

“Geolocation privacy is a really interesting and fast-developing area of the law,” says Pomfret, who enjoys golfing, family time and travel outside work. 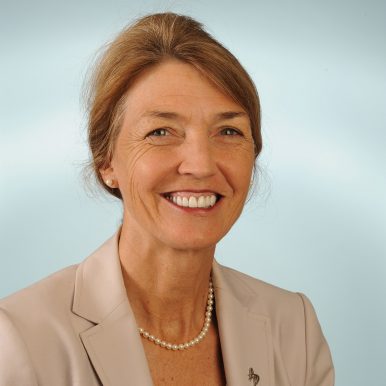 Lots of children were inspired by the first moon landing; Sally Richardson was motivated by it.

She oversees a team building NASA’s Habitation and Logistics Outpost (HALO) module, the crew module and docking port for NASA’s Gateway, a space station that will orbit the moon, serving as a platform for lunar and space exploration.

A new grandmother, Richardson has served the past two years as president of the Washington Space Business Roundtable, which promotes the space business and education in the region.

HALO is expected to launch around 2025 and will be the culmination of Richardson’s 40-year career: “We are building a mini space station that’s going to go around the moon, and there could be nothing more exciting.”