The number of initial jobless claims filed last week jumped a staggering 64.3% to more than 19,000, according to Virginia Employment Commission data released Thursday. This is the highest number of initial claims reported since August 2020.

For the week ending Jan. 2, 19,530 Virginians filed initial claims for unemployment, an increase of 7,640 claimants from the previous week.

Last week, 63,588 Virginians remained unemployed, a 0.2% increase from the previous week but 41,417 higher than the 22,171 continued claims from the same period last year. People receiving unemployment benefits through the VEC must file weekly unemployment claims in order to continue receiving benefits.

“Over half of claims were in the accommodation/food service, health care, administrative and waste services and retail trade industries,” according to the VEC. “The continued claims total is mainly comprised of those recent initial claimants who continued to file for unemployment insurance benefits during the COVID-19 pandemic.”

Below are the top 10 localities, listed by number of initial unemployment claims, for the week ending Jan. 2:

Nationwide, the advance figure for seasonally adjusted initial claims for last week was 787,000, a decrease of 3,000 from the previous week’s revised level, according to the U.S. Department of Labor. There were 335,480 initial claims during the same week last year.

Virginia’s COVID-19 cases have continued to surge while the first wave of vaccines are administered, and Gov. Ralph Northam has placed further restrictions on some businesses, as well as directing state authorities to discipline businesses that don’t obey the ban of alcohol sales after 10 p.m., or social distancing and mask mandates.

Northam also ordered in late December that Virginia businesses that laid off employees in the first three months of the pandemic will be held harmless for the layoffs, allowing businesses to avoid paying about $200 million in payroll taxes to replenish the VEC’s Unemployment Insurance Trust, which ran out in October. Currently, the state is relying on federal money to pay state unemployment benefits. 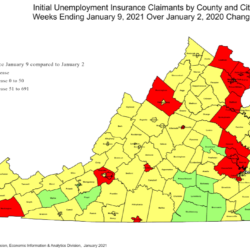