Industrial space gets boost in Amherst

In September, the U.S. Department of Commerce announced that it awarded a $3 million grant to the county Economic Development Authority to build a new county-owned facility, with hopes that the project would create 45 new jobs, retain 24 jobs and generate $3.25 million in private investment.

The federal government has a 20-year, first-priority mortgage lien on the site, essentially ensuring that the local EDA uses the facility to attract and grow homegrown businesses and doesn’t entice firms from neighboring counties.

Commercial space is tough to come by in the largely rural county just north of Lynchburg, and local leaders are competing with surrounding counties to attract and retain manufacturing entrepreneurs.

Victoria Hanson, the Amherst County EDA’s executive director, says that small-business owners aren’t likely to take on the financial risk and time commitment to build their own facility and that without available industrial space, the county was at a competitive disadvantage.

“If we don’t have one, then they are going to look for other places to go,” Hanson says. “We have not had this funding to be able to basically build something of this size and scope in the past.”

Amherst is still recovering financially from the 2020 shutdown of the Central Virginia Training Center, a 100-year-old state mental health facility that had at one time been a primary economic engine for the county. Plus, neighboring counties that formerly relied on tobacco crops qualify for economic development grants from the Virginia Tobacco Region Revitalization Commission, while Amherst does not.

The $3 million grant requires the county to match up to $1.3 million. Hanson says the county is investing $1.6 million, and she expects construction to hopefully not take more than two years, with a targeted completion date of 2023.

As the aluminum boat manufacturing business has grown, Basten has been seeking a facility with a loading dock, high voltage electricity, climate control and room to operate a forklift. The new facility sounds perfect to him.

“[Moving] is the last thing we want to do,” he says. “We like the vibe out here in Amherst County.” 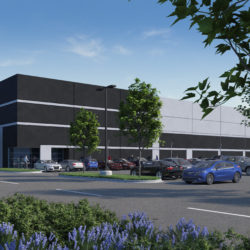 County has more funding to award