Former Virginia Del. Christopher K. Peace will be the next president of the Council of Independent Colleges in Virginia Inc. (CICV) after the 2023 regular General Assembly session concludes.

“[Chris] is far more than a lobbyist and attorney — he is a strategist with a great grasp of the issues. He carries a reputation as a thoughtful legislator, a relationship builder, avid listener and problem-solver. I am confident he will bring a fresh approach to CICV and for the future of Virginia’s college graduates,” said Scott D. Miller, chair of CICV and president of Virginia Wesleyan University, in a statement.

In July, CICV President Robert M. Lambeth Jr. announced his plans to retire once the organization chose a successor.

“The commonwealth is home to the best collection of institutions of higher education in the nation. CICV’s member institutions contribute greatly to this robust landscape of academic excellence. I’m deeply honored to have been named the next CICV president succeeding Robert,” Peace said in a statement.

Peace currently practices law in the Richmond area from his Mechanicsville office. From 2006 to 2020, he served as a Republican in the House of Delegates, representing the 97th district, which included New Kent County and parts of Hanover and King William counties. He was a member of the House Appropriations committee and chaired the Transportation and the Elementary and Secondary Education subcommittees. Peace also served on the Budget Conference committee. He chaired the House General Laws committee and served on the Health, Welfare and Institutions committee.

Peace is a graduate of Hampden-Sydney College and the University of Richmond School of Law.

“Chris Peace is uniquely qualified to serve as president, with multigenerational knowledge of the commonwealth and deep familial ties to CICV member schools,” Franks said in a statement. “He is an accomplished leader with a real understanding of government and politics in Virginia, having been in every corner and hallway.”

Founded in 1971 and based in Bedford, the Council of Independent Colleges in Virginia, also known as Virginia Private Colleges, is a nonprofit organization representing 27 accredited nonprofit private colleges and universities in Virginia. 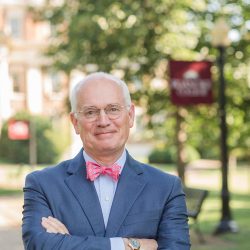