Virginia is strengthening its claim as a leading port on the East Coast.

The Port of Virginia is midway through a $700 million project to expand its two largest terminals, which will allow the port to handle an additional 1 million container units per year.

The 800-foot extension of the berth at VIG allows the terminal to service as many as three ultra-large container vessels (ULCVs) simultaneously. VIG also boasts 19,600 feet of new railroad tracks and more room to stack and sort containers. The facility has 26 new rail-mounted gantry cranes serving 13 new container stacks, and in January the port installed four new 170-foot-tall ship-to-shore cranes. The largest on the East Coast, the new cranes are able to service container vessels of all sizes.

“That terminal is now operating at full speed,” Harris says. “The investment is really paying off. It’s efficient, it’s predictable, and ocean carriers have taken notice.”

Throughout the expansion at VIG, which began in February 2017, the Port of Virginia maintained service levels, handling a record
2.93 million 20-foot equivalent units, or TEUs, of cargo in 2019. Imports were up 3%, while export TEUs were up 10%. Barge volume jumped more than 18%, and the amount of cargo moving over the Richmond Marine Terminal was up 19.5% last year. Truck volumes climbed 2%, and rail volume was static.

VIG is seeing turn times for motor carriers that are well below the industry standard, thanks to its Truck Reservation System, which debuted in 2018. As of spring 2020, 92% of all trucks had turn times of less than 60 minutes and 55% were under 40 minutes. VIG also has increased the number of lanes at the truck-processing gate to four. A larger rail yard, greater capacity for refrigerated cargo and other advancements have also contributed to productivity.

The other major port project is the deepening and widening of the Norfolk Harbor, which got underway more than two years early in December 2019. The Port of Virginia and the U.S. Army Corps of Engineers are pushing ahead with a $350 million project to dredge the main Norfolk channel to a depth of 55 feet and widen the Thimble Shoal Channel to 1,400 feet.

“That’s a big deal because it will allow these big ships to be coming and going at the same time,” Harris says. As-is, the Thimble Shoal Channel is too narrow for two-way traffic, and the Coast Guard must restrict the flow of ships in the channel for up to four hours at a time. When completed in 2024, the harbor will once again be the deepest port on the East Coast. (Virginia’s port is currently tied with Baltimore, Miami and New York, but Charleston, South Carolina, which is dredging to 52 feet, will temporarily hold the title of deepest port from 2022 to 2024.)

“Having deep channels and efficient terminals, with cargo moving inland into the Midwest by rail really sets us up for success,” Harris says. “That’s where we become really competitive.”

The dredging project, because it is expected to bring in more business, required the port to expand the terminals so they can handle more volume in turn. The expansion at NIT includes 18 new semi-automated container stacks served by 36 new cranes. Six stacks were added in late 2019, and 12 more came online earlier this year. When completed, the project will increase NIT’s capacity by 400,000 container units, or 46%, to 1.25 million container units. 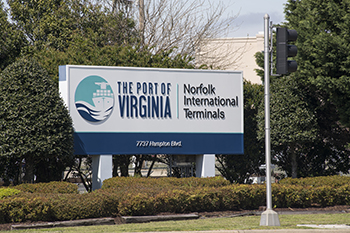 Harris says the NIT expansion, a $375 million investment, is on schedule for completion this fall. During the coronavirus outbreak, workers were still on site at the dredging and NIT projects, Harris says, while maintaining safe distances to avoid COVID-19 exposure. Using cranes and other machines outside, they aren’t at as high a risk as people who work in enclosed, smaller spaces, he notes.

The Port of Virginia is currently the third-largest container port on the East Coast, behind New York-New Jersey, which serves the populous Northeast states, and Savannah, Georgia, which receives cargo bound for the growing Southwest region of the country.

The ports at Savannah and Charleston, South Carolina, have observed the value of inland terminals like the Virginia Inland Port and the Richmond Marine Terminal, Harris says, and are taking steps to add these kinds of facilities to their systems.

Vinod Agarwal, a professor and economist at Old Dominion University, says it’s crucial for the Port of Virginia to market its competitive advantage.

“You may not see the impact of the investment in the port in the near future,” Agarwal says. “However, the port needs to continue to market its competitive advantage to shipping companies and keep attracting firms by showing what it can do for them.”

In December, William & Mary released an economic impact study
that found that port activity was responsible for more than 397,000 jobs and $92 billion in spending in Virginia during fiscal year 2018.

As the Port of Virginia expands its terminals and cargo capacity grows to 4.4 million TEUs, Vinod says, jobs will follow at the gate. But economic impact across the state is harder to measure. “When cargo, especially finished product, moves through to the Midwest, it doesn’t affect Virginia,” he says. “Some of it goes to distribution centers and the Virginia Inland Port, but these facilities are becoming more capital-intensive. Manpower is not needed as much anymore, so economic growth is limited.”

However, if Virginia is able to attract business as a result of the port system, some of the cargo will stay in the commonwealth, Vinod says. “Parts will be assembled here. Businesses will locate here. That can add value. Those firms are much more important in the long run.” 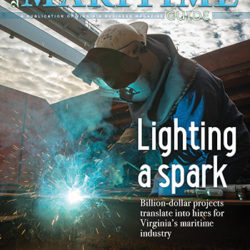