Because of the virus’ two-week incubation time, plus time for testing and reporting results to VDH, there will be a two- to four-week wait before the state knows the impact of reopening on virus rates, Oliver said in an interview with Virginia Business.

By that time, Virginia could be in Phase Three, the final stage of the governor’s “Forward Virginia” reopening plan.

With the whole state set to be in Phase Two by Friday, Oliver encouraged Virginians to continue being vigilant about washing their hands, wearing masks when in enclosed spaces and keeping six feet of distance from others.

On Friday, the city of Richmond and five Northern Virginia localities will join the rest of the state in Phase Two, which further loosens restrictions on nonessential businesses and allows gatherings of 50 people. Most of the state has been in Phase Two since June 5. Phase One started May 15 for all except Richmond, Northern Virginia and Accomack County, which entered the first phase two weeks later.

Also, on Memorial Day weekend, the governor allowed Virginia Beach’s shores to open for sunbathers and swimmers, as long as they maintained social distancing. Previously, only exercise and fishing were allowed on beaches.

Between people going to beaches and dining out, among other recently gained freedoms, it will be “hard to tease out” specific causes for future cases of the coronavirus, Oliver noted.

Oliver and other health officials have said over the past three months that the number of cases is likely to increase as the state begins to reopen — but they hope that Virginia’s masking mandate, along with other safety measures, will help the state avoid a sharp spike that could overwhelm hospitals.

Aside from reopening, recent large protests across the nation — even with many in the crowds wearing masks — could cause a resurgence, some health officials worry. However, it’s too soon to tell definitively, since most protests have occurred only within the past two weeks.

The incubation period for the novel coronavirus is between two and 14 days, according to the Centers for Disease Control and Prevention, which has advised anyone who has been exposed to a confirmed patient to self-quarantine for two weeks.

Although it is now much easier to get tested for the virus in Virginia, with tests offered at 39 CVS pharmacies in Virginia and other locations like doctors’ offices, Oliver said that it is not necessary to get tested unless you show symptoms, such as a cough, a fever or losing your sense of taste.

The Virginia Department of Health’s COVIDcheck site allows Virginians to check their symptoms and find a testing location nearby, he said.

Oliver said that for his part, he still plans to limit himself to just necessary outings during Phase Two, as anyone older than 60 is considered part of a higher risk group and is advised to stay at home as much as possible.

Although he participates regularly in Gov. Ralph Northam’s coronavirus news conferences, Oliver said he has gone to the grocery store only once since the pandemic and instead orders most groceries or other items to be delivered to his home. Also, along with washing his hands frequently and wearing a mask, he added, “I keep a bottle of hand sanitizer in my car.”

Oliver did have an eye doctor’s appointment last week, and found the experience was different from before the pandemic.

“I had to wear a mask, and they took my temperature when I came in and asked me a bunch of questions,” Oliver said. “But I was able to get my eyes checked and get some new glasses.” 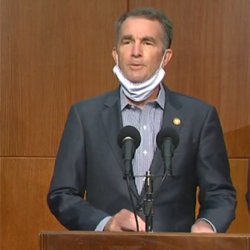 No alcohol sales, consumption in restaurants after 10 p.m.