Supply chain disruptions were moderately or significantly impacting operations of 86% of respondents. More than half (52%) reported that the issue had worsened over the past three months.

“Hotels have a complex supply chain that requires regular procurement of a wide range of goods and services each day. And whether it’s production backups or shipping delays, supply chain disruptions are compounding hotels’ existing problems and increasing operating costs during an already tough time,” AHLA President and CEO Chip Rogers said in a statement.

Eighty-five percent of hotels surveyed said they were experiencing a lack of availability for linens and other soft goods. Seventy-six percent said they faced a shortage of food and beverage supplies, and 72% said the same with cleaning and housekeeping supplies.

Supply chain issues have left hotels across Virginia scrambling, Virginia Restaurant, Lodging and Travel Association President Eric Terry said. In order to accommodate guests, some have had to deviate from chains’ dictated linens and bathroom amenities in favor of what is available.

“It’s affecting food products as well,” Terry said. “Things that they’re anticipating getting in from a food and menu perspective they’re just not able to do.”

Of those surveyed, 77% reported experiencing increased costs for linens and soft goods, 77% for food and beverage supplies, and 79% for cleaning and housekeeping supplies. 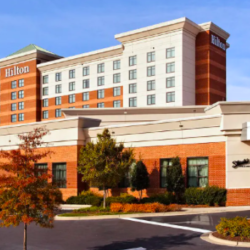 Nationwide business travel revenue expected to be down 66%