RICHMOND, Va. — After a few lawmakers missed time during the session due to COVID-19, Del. Shelly A. Simonds, D-Newport News, said she was thrilled to see all 100 members of the House unanimously pass a bill requiring hotels to provide human trafficking training for employees.

“It was really exciting for me to watch the vote because I didn’t know how it was going to go,” Simonds said. “We haven’t had 100 to zero very often.”

House Bill 258 will authorize the Department of Criminal Justice Services to create a free online mandatory course to help hotel employees better recognize and report human trafficking. After passing through the House in February it passed the Senate 36-4 on March 11.

Anyone employed by a hotel as of July 1 has to complete the required training course by Dec. 31.

Robert Melvin, director of government affairs for the Virginia Restaurant, Lodging and Travel Association, said that organizations like the Polaris Project have helped to develop onboard training courses for major brands like Marriott International and Hilton Hotels.

The hospitality industry has made combating human trafficking a priority, Melvin said.

“It’s something that we take very seriously,” Melvin said. “We’ve worked really hard to curtail on our own as an industry.”

A provision in the bill states that hotel employees can use alternative online or in-person training courses like those already required by major brands, if approved by the Department of Criminal Justice Services.

Simonds said that the bill will help raise all hotels to the standards of those with training courses already in place.

“I think that there are smaller hotels that aren’t part of these large chains that need support and need a way for their employees to complete this training,” Simonds said.

The Virginia Restaurant, Lodging and Travel Association worked with Simonds to create a provision that expedites the process of getting major brands current training courses approved by the DCJS, according to Melvin.

DCJS would need to approve or disapprove the use of an alternative course within 60 days of it being submitted for approval, according to the final version of the bill.

The bill could also help smaller hotel owners become part of larger brands quicker by already having the standard of human trafficking training courses required for employees throughout the state, Simonds said.

“In order to move up and become a Holiday Inn you need to show that you do have certain standards,” Simonds said. “This is going to lift up the standards for everyone in the hotel industry.”

Sen. Tommy Norment, R-Williamsburg, asked Simonds in a Senate committee hearing if hotel proprietors would have to pay any cost to the DCJS. Lawmakers substituted the bill to state that it would be free for hotel owners and their employees to take the course.

Simonds proposed almost $233,000 each year for the next two years in the budget to implement an online training platform. General Assembly members return next week to approve the final budget.

Questions were raised during the Senate Judiciary Committee hearing about which employees would be required to complete the training. Simonds added a substitute to restrict the required training to public facing employees, including housekeepers, bartending staff and management.

“Training housekeepers could be the most important part of this bill,” Simonds said. “Because they see things.”

An estimated 1,500 hotels and over 116,000 hotel employees would be subject to the requirements, according to the bill’s impact statement.

Despite the substitutions, the bill still serves its purpose of empowering bystanders to report human trafficking, Simonds said. She said she hopes to pass similar legislation next session focused on short-term rental properties like Airbnb and Vrbo. 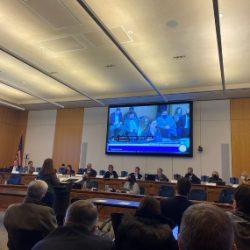