Hotel revenues continue to outpace 2019, but only slightly

The commonwealth’s hotel industry is continuing its recovery, though the Northern Virginia market continues to be a drag on its performance, according to data from STR Inc., a division of CoStar Group Inc. that provides market data on the U.S. hospitality industry.

The latest data show rooms sold decreased by 4.6% in Virginia through August 2022, compared with the same period in 2019, remaining consistent with July of this year. The average daily rate (ADR) paid for hotel rooms through August was $121, a 6.4% increase compared for the same period in 2019, and $1 more than July 2019 though July 2022. Revenue per available room (RevPAR), an industry standard of the health of the lodging sector, was $75 and was 0.5% lower compared with 2019, and also a $1 increase from July 2019 through July 2022, according to a press release from Old Dominion University’s Dragas Center for Economic Analysis and Policy

The three largest markets in the state are Northern Virginia, Hampton Roads and Richmond. Together, they generated about 77% of the commonwealth’s hotel revenue in 2019. Hampton Roads’ room revenue in the first eight months of 2022 was 18.7% higher than during the same period of 2019; Richmond’s was 10.4% higher; and Northern Virginia remained down by 20.4%, a slight improvement from the 22% decrease reported in July. In 2019, that market accounted for 43% of the state industry’s revenue.

Overall, hotel revenues for the commonwealth through August and were 1.4% higher than during the same period in 2019.

“The month of August is typically slightly slower than the month of July,” Agarwal said. “So that does put it a cap on this, so to speak.”

What’s driving revenue is not occupancy, “but the mere fact that hotels are able to charge higher rates,” Agarwal said.

While revenues may be up because of inflated prices, rooms sold are still lagging when comparing August 2019 to August 2022. In Northern Virginia, rooms sold decreased by 17.5%; they decreased by 7.9% in Roanoke and by 7% in Bristol, Virginia. Lynchburg saw the largest increase at 9.9%, followed by Staunton/Harrisonburg at 7.9%, Blacksburg at 4.8% and Richmond at 1.1%.

Blacksburg, Charlottesville and Hampton Roads saw the largest increases in percent change in total room revenue at 22.1%, 19% and 18.7% respectively.

Agarwal said he expects numbers will continue to improve slightly, though hotels face a challenge to increase demand, including competition from short-term rental options like VRBO and AirBnB.  Northern Virginia, which relies heavily on business travel and conventions, has seen improvements for much of the year from pre-pandemic levels.  Airline labor shortages, the ongoing COVID-19 pandemic and remote work continue to be hinderances.

“Business travel has not yet recovered completely,” Agarwal said. “And I don’t think it will recover completely.  So Northern Virginia is going to have a little harder time.”

But, as workers return to offices, Eric Terry, president of the Virginia Restaurant, Lodging and Travel Association, said he expects a boost to the industry.

“That’s going to make all the difference in the world,” Terry said. 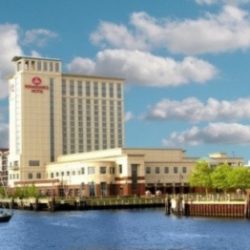