When he graduated from Virginia Tech four years ago, AJ Medina could have returned home to job-rich Northern Virginia. Instead, he moved to Virginia Beach.

Today, he’s designing buildings for colleges and universities as an architect with Clark Nexsen, while settling into a new house and enjoying the amenities that Virginia’s largest city offers.

Medina is one of a growing number of millennials — born between the early 1980s and the late 1990s — who are flocking to Virginia Beach. Seventeen percent of the city’s residents fall into the 20-29 age group, an increase of 5.6 percent from 2010 to 2013. The city has become a magnet of sorts for millennials in search of diverse employment, housing and entertainment options — so much so that in August, Forbes designated the city a “millennial boomtown.”

For Medina, Virginia Beach is a good blend of urban and suburban life, with beaches thrown in as an added bonus. “On the weekends, my friends and I do anything from going to Town Center to bumming it out on the beach.” And, the cost of living is affordable for recent college graduates, he adds, noting that four years out of college he most likely would not have been able to purchase a home in Northern Virginia. Based on data from 2012, the median house price was $480,200 in Fairfax County, compared with $272,700 in Virginia Beach.

Medina and his fellow millennials are fueling Virginia Beach’s growth, says Gerald S. Divaris, chairman and CEO of Divaris Real Estate, who notes that the average age of resort city residents is in the early 30s. “We have a lot of younger folks, but they’re working and more educated and have money to spend,” Divaris says. Millennials, he adds, are drawn to the city’s expansive oceanfront, varied housing options and highly regarded public schools. 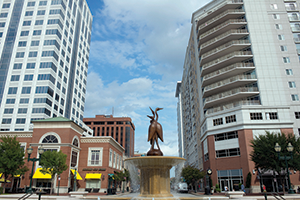 City leaders also attribute much of Virginia Beach’s growing popularity among young professionals to Town Center, the 17-block, mixed-used development, which has become the core of the city’s central business district.  Since opening in 2003, Town Center has evolved into a trendy destination, setting its sights on upscale retailers that are unique to the region. 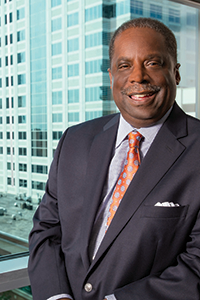 “A lot of people are looking to work and live within walking distance. You can walk to work and then at 5, 6 or 7, leave the office building, and you have the choice of multiple restaurants for dinner. Later, you can go to a performance at the Funny Bone or at the Sandler Center for the Performing Arts.”

Divaris, whose company leases and manages Town Center, believes the development’s  success in attracting upscale shops reflects Virginia Beach’s growing affluence, as well as the development’s central location in the city. “Town Center is equidistant to everybody,” he says. “It has a terrific combination of uses so it’s not just dependent on offices, retail or restaurants. That enables these types of stores to succeed.”

Clark Nexsen CEO Tom Winborne also believes the trendy retailers and entertainment options will help him attract young engineers and architects like Medina. Based in Hampton Roads since the early 1970s, the architectural design firm had leased space in Norfolk for almost 30 years when it began looking for updated headquarters.  With its work-play-live environment, Town Center fit the bill, and about 300 Clark Nexsen employees moved into Main Street Tower in July.

“Where we were really didn’t have the downtown feel that all our young employees were looking for,” Winborne says. “They pay a lot of attention to where they’re located. Town Center has the amenities we were looking for: housing for lots of different age groups, tons of walk-to places for breakfast, lunch and after work. It’s got that young, vibrant environment we’re looking for.”

In addition to anchoring Main Street Tower, Clark Nexsen architects and engineers designed the building, customizing the firm’s 80,000 square feet of office space to include an open layout and lighting controlled by sensors for time of day and occupancy.

Winborne, however, stresses that the company did not set out to leave Norfolk. The firm checked out rental options in downtown Norfolk and other areas of the city before committing to Town Center. “It’s never been a Norfolk thing or a Virginia Beach thing,” he adds. “I’m a staunch believer in regionalism. The thing most important to me is to keep Clark Nexsen here in Hampton Roads.”

Princess Anne Commons
Virginia Beach’s economic development department has also set up shop in Main Street Tower. Harris hopes the glistening new building will be another tool in the city’s arsenal to attract new businesses. “Having that Class A product on the market allows us to go across the world and showcase that facility, Town Center and the other facilities available here in Virginia Beach.” He adds that the city is already looking at options for Town Center’s next phase.

Harris and his team also are focusing on other business sites in the sprawling city. Princess Anne Commons, home to several medical facilities — including Sentara Princess Anne Hospital, LifeNet and Operation Smile, as well as the Virginia Beach Higher Education Center — is slated to become the city’s next corridor of economic development.

Earlier this year, Mayor Will Sessoms established a task force charged with attracting more industries focusing on biotechnology, pharmaceuticals and health-care delivery. In preparation, the city has hired a bioscience consultant, opened a new shopping center along the corridor and is improving roads in the area. In September, the task force announced preliminary plans for a new bio-medical park in the Princess Anne corridor that would be developed as a public/private partnership.

“We really haven’t necessarily leveraged bioscience as an industrial cluster,” Harris adds. “But we’re always looking to diversify our economy, and we think this is a great new industry cluster.”

Sports arena
Fifty-four businesses moved to Virginia Beach or expanded their operations in the city last year, leading to the creation of more than 2,200 jobs, a 100 percent increase over the previous year. The city also garnered $260 million in new capital investment, factors leading to CNNMoney.com naming it the “Easiest Place to Start a Business” and the second “Most Business-Friendly City” in the United States.

Harris and other city officials believe a new sports and entertainment facility would contribute to Virginia Beach’s business-friendly status. This spring, City Council entered negotiations with United States Management to build an 18,000-seat arena. USM has lined up $200 million in private financing to construct the facility, with the city contributing $52 million to $78 million for infrastructure improvements.  “It would expand our goal to have a year-round experience in the resort area,” Harris says, noting that the arena would host entertainment and sporting events primarily from October through May, the “shoulder season” for tourism when the number of visitors typically drops off.

While an arena would not be completed until 2016, the city could welcome the Virginia Beach Neptunes, its first minor league professional baseball team, as early as next spring. Under the auspices of Virginia Beach Professional Baseball LLC, the $40 million project would be financed through private bonds and would include a 5,000-seat stadium and 13 baseball and softball fields adjacent to the Virginia Beach SportsPlex. “It will help brand Virginia Beach as an amateur sports mecca for teams to come to,” Harris says. 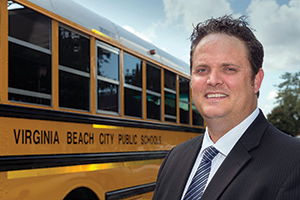 Millennials who have children in Virginia Beach Public Schools are among the citizens Aaron Spence is talking to as he settles into his new position as the city’s school superintendent. The Virginia Beach native graduated from the city’s Green Run High School and returned home this summer after stints as the chief high school officer for the Houston Independent School District and superintendent of Moore County (N.C.) Public Schools. “It was a unique opportunity for me to come back and serve the school district that meant so much to me and served me so well,” he says.

As part of his 120-day transition plan, Spence has been meeting with community leaders, principals, teachers, parents and students to get to know Virginia Beach’s 86 schools and their needs. “We’re having frank conversations about where we are today versus what we say our expectations are for our students,” Spence adds. “That gives us areas where we need to focus and work.”

Spence’s initial goals are straightforward: keep the schools focused on student learning and establish Virginia Beach Schools as the nation’s foremost school division. A complete shift in the system’s priorities is not on the drawing board, even as he formulates a new strategic plan.

“I don’t foresee overturning the apple cart,” he says. “Virginia Beach is an excellent school system, and community support for our schools is exceptional, but there are opportunities to strengthen and extend the work and focus on rising challenges.”

Those include closing achievement gaps because of a growing number of students living in poverty, responding to a business community seeking graduates immersed in globally competitive skills and boosting students’ critical thinking skills. The school system has forged connections with local community colleges and vocational schools, with students taking advanced courses and attaining certification in industries ranging from health care to advanced manufacturing.  All are part of creating multiple pathways for success, Spence adds.

“A student can turn left when they graduate from high school and be employable immediately if they choose or continue on to postsecondary education. No one size fits all solutions for our students,” he says. “We want to make sure no matter what our students want to do, they understand the options they have and what those options mean in terms of becoming productive members of society.”

Options that include remaining in or — like Spence — returning to Virginia Beach.