Despite a resounding defeat, organizers are still fighting to unionize The Hershey Co. plant in Stuarts Draft. In late March, about 79% of the plant’s workers voted against unionizing at Hershey, the largest employer in Augusta County with nearly 1,500 workers.

But while that battle might be over, the war is not, according to officials with the Bakery, Confectionery, Tobacco Workers and Grain Millers’ International Union. The organization has filed a complaint with the National Labor Relations Board, accusing Hershey of 14 unfair labor practices related to the vote. The NLRB had not certified the voting results as of mid-May.

John Price, director of organization for BCTGM International, says he’s confident the labor board’s investigation will find Hershey guilty of “objectionable conduct during a critical period, and they’ll end up tossing the results.” That, he says, could lead to another vote.

Hershey spokesman Jeff Beckman says the lopsided result sends a clear message of support for the company: “We believe the team at Stuarts Draft has spoken with the vote and showed they have a strong preference to continue engaging directly with the plant leadership versus being represented by a third party.”

The effort to organize the plant began last year, with some workers complaining about seven-day work weeks, favoritism and a general lack of respect. Jim Gibson, one of the workers who led the movement, says the union had momentum last fall.

“But the main thing we had going against us was the fear of retaliation, that people were going to lose their jobs for being union supporters,” says Gibson, who quit his job the day after the vote.

The union’s filing with the NLRB cites several examples in which it claims Hershey “interfered with, restrained and coerced its employees” with the intent of discouraging union activities or membership. The filing also claims Hershey improperly offered employees numerous benefits during a union organizing campaign.

Nationwide, union membership has declined for decades until recently, when it scored several high-profile victories, including unionizing five Starbucks Corp. stores in the Richmond area and an Amazon.com Inc. warehouse in New York. Virginia, however, has historically had one of the country’s lowest union density rates.

The Stuarts Draft plant, the second-largest of Hershey’s seven operations, primarily produces chocolate candy that includes nuts, such as Reese’s and Almond Joy. Two of Hershey’s other six plants are unionized.

Business expansions dominated the landscape of a stable economy 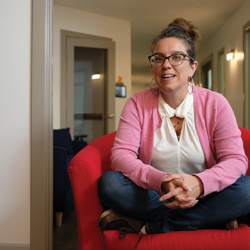