Haute cuisine in a tiny town

An electric fry pan purchased at a yard sale for $1.89. A wood-burning cook stove. An unheated farmhouse with a big garden bought on time with a $48-a-month mortgage. A trove of old French cookbooks borrowed from a local library. A few dollars in the bank from working in restaurants, starting at age 15.

Out of those simple beginnings — and the later conversion of an abandoned garage — Patrick O’Connell, a self-taught chef, has forged an internationally acclaimed restaurant and lodging.

Each year, the Inn at Little Washington draws throngs of visitors from around the globe to Washington, Va., a tiny town in the foothills of the Blue Ridge Mountains. With a population of less than 150, there’s no stoplight. It’s a place where locals say that on Main Street you’re as likely to see a John Deere tractor as a limousine, or nattily dressed wait staff balancing dinner trays on their way to a guest’s room.

A long list of luminaries have stayed at the Inn, including baseball great Cal Ripken, former Vice President Al Gore, actors Robert Duvall, Warren Beatty and his wife, Annette Bening,  and many of the Supreme Court justices, to name a few.

This year O’Connell is celebrating the Inn’s 40th anniversary.  The theme, “A Magnificent Dream,” is indicative of his theatrical flair and will be carried out in a series of events in Virginia and France.  (See box, Page 40). 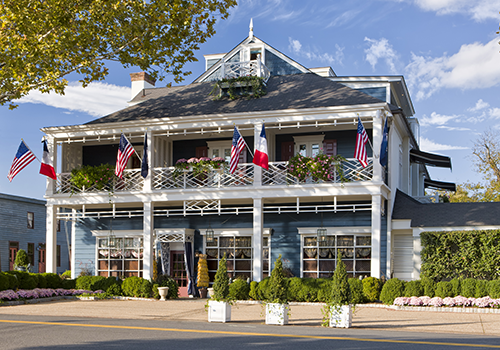 The Inn is O’Connell’s crowning glory. At age 72, the renowned chef and proprietor presides over an establishment that repeatedly earns top rankings from some of the most discriminating travel and dining groups in the world.

This year, for example, the Inn’s restaurant won AAA’s five-diamond rating — the highest possible — for the 30th consecutive year, longer than any other restaurant in the 80-year history of AAA’s rating system, a process that involves unannounced visits.

“To create an exquisite dining experience worthy of the highest praise in the land is an accomplishment, but maintaining that superb level of excellence for more than a quarter of a century is simply unmatched,” says Martha Mitchell Meade, manager of government and public affairs for AAA’s mid-Atlantic region.

AAA defines a five-diamond restaurant or hotel as one, with “Ultimate luxury, sophistication and comfort with extraordinary physical attributes, meticulous personalized service, extensive amenities and impeccable standards of excellence.”

A grandmother’s influence
O’Connell, who was born in Washington, D.C., learned his love of food from his grandmother. She lived in Wisconsin, where O’Connell spent his summers as a boy. He has only to close his eyes to return to her kitchen with its oilcloth counters.

“It was the kind of kitchen that had several cookie jars always full [and] a wonderful breakfast nook, which we have replicated here at my kitchen at the Inn,” O’Connell says.

“Outside the kitchen door was an old apple tree, a rhubarb patch, a strawberry patch and a couple of herbs, a little garden, a grape arbor that I used to read under.”

His mother’s talents, on the other hand, lay not in cooking but in entertaining. “There was nothing casual or thrown together in my mother’s world,” he says. “So, if we were having company, cleaning the house usually began two weeks prior to their arrival. And for several days before, a path of newspapers was laid down, and no one was permitted to step off of it.”

O’Connell says his first real job was at a hamburger restaurant on a main artery leading through Maryland. The chef, who studied theater in college before giving it up, says the culture of restaurant life made an immediate impression.

“I love the duality of the restaurant people behind the scenes and the illusion they maintained in what is now called the front of the house,” O’Connell says.

“It gave me the feeling of possessing a faculty that normal people didn’t have — that you could live in two worlds, that you could enter the world of illusion and [then] step back into the blood-and-guts zone,” he says.

Another experience that helped shape O’Connell’s career was a yearlong visit to France. There he found that food was regarded as art and celebrity chefs as national icons.

“I think you take all the influences of your life, put them in a big pot and stir, and the best rises to the top,” he says.

O’Connell and a former partner, Reinhardt Lynch, raised vegetables and sold them to health food stores in Washington, D.C., before they found a way to make a living an hour away in rural Rappahannock County, a place with no major grocery store.

Developing a following
“There was a network of 50 local families, the landed gentry, who loved to show off their magnificent spreads but were desperate when it came to what would they serve for food,” O’Connell recalls.

To fill that niche, he and his partner bought an old van for $150, cooked food they were raising on their farm and began catering parties, weddings and receptions — including one for former U.S. Sen John Warner when he married actress Elizabeth Taylor.

For waiters and waitresses, O’Connell would recruit members of the local hippie culture, put together uniforms from clothes he purchased at various Goodwill shops and train the staff on the fly.

In time, O’Connell and his partner developed a clientele and a reputation for the French cuisine that marked the parties they catered.

That would serve them well when they decided to open a restaurant in Little Washington, a community laid out by 17-year-old surveyor George Washington in July 1749.

At first, the prospective restaurateurs could not get a sufficient loan from a local bank. So they decided to go to a bank in a neighboring community, showing up without an appointment and asking for the president.

The bank president turned out to be a former guest at one of their parties, and he had had a fabulous time. “He said, ‘I can start you out with $25,000, if that would help,’” O’Connell recalls with a laugh, saying he still can’t believe his luck.

O’Connell and his partner subsequently rented a vacant gas station and garage in Little Washington at $200 a month, renovated the property and opened for business on Jan. 28, 1978, in the middle of a blizzard.

It was a difficult start. A month or so later, though, they were catapulted into prominence when a Washington restaurant critic, John Rosson of the Washington Evening Star, dined anonymously at the restaurant. The critic described the experience as a “tour de force.” Reservations began flooding in.

On opening day, you could have dined on scampi griglia a la pescadora (grilled shrimp) and escalope de veau au calvados (veal scallopini with French apple brandy sauce) for $4.95. Today, meals at the Inn at Little Washington go for $218 per person excluding tax and gratuity. Optional wine pairings from the Inn’s 14,000-bottle wine cellar are $125 per person. 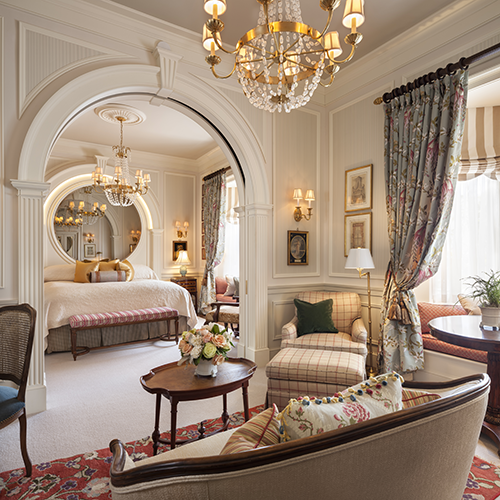 Rates for lodging range from $395 a night for a standard room during the non peak season to $3,575 per night for a Saturday  in high season for one of the Inn’s most luxurious accommodations, the  3,600-square-foot Claiborne House, a private event venue that includes two bedrooms, two and a half baths, a full chef’s kitchen, library and media room.  Prices vary depending on the time of year and number of occupants. They include a welcome cocktail, afternoon tea, house breakfast and valet parking.

In addition to the main hotel, the Inn has a number of other properties that have been converted into sumptuous living quarters, with names such as the Gamekeepers Cottage, the Mayor’s House and The Parsonage.

The Inn also has plans for opening a café and bakery in what was the town’s post office with the hope of expanding the concept in other markets, according to Robert Fasce, its business and brand development manager.

New directions
In 2007, O’Connell split with his partner over the direction of the Inn and borrowed $17 million to buy him out, according to The Washington Post.

O’Connell says many observers predicted catastrophe, but the Inn instead began expanding, and its reputation grew with it.

John Fox Sullivan, a retired magazine publisher who is Little Washington’s mayor, says the Inn is crucial to the town’s economy.

“The Inn generates more than 80 percent of the revenues to the town,” through meals and lodging taxes, employment and the halo effect on other inns, restaurants and shops in the community.

Altogether, the Inn has more than 140 full-time employees and often has more than 200 on the payroll, with the addition of contractors for various construction and renovation projects.

“Patrick O’Connell came to this town with nothing and built up this enterprise into a world-class enterprise. He loves this town and loves this county. He’s very sensitive to what the town is all about, its authenticity,” Sullivan says.

Sullivan adds that O’Connell is gregarious and outgoing at the Inn, a posture that might hide a bit of shyness.

“He’s in his own world, and it’s a slightly different world. He’s always looking at stuff as if he’s the director of a movie — he never stops thinking about how to make the place better,” Sullivan says.

In keeping with his own roots as a farmer and purveyor of naturally grown food, O’Connell maintains a full-time “farmer in residence” at the Inn to produce a stream of fresh vegetables and other edibles.

In addition to two gardens, a greenhouse and cherry orchard, the Inn also has arrangements with local farmers who provide agricultural products, according to the Inn’s requirements.

The Inn’s future
While the Inn at Little Washington has been a boon to the community and the surrounding region, concern has crept in about its future. People wonder how much longer O’Connell will be able to sustain the long, stressful hours required of a lead chef.

“I don’t think the Inn is ever going away,” says Sullivan. “It comes down to who the new ownership will be.”

For his part, O’Connell, who has been called “the pope of American haute cuisine” in various publications, says people should not be worried because he’s not.

“Not only can it go on, it will go. And it will continue to evolve, as it is now. It is no longer dependent on one person; it is a culture that has been created,“ O’Connell says, citing a multi-generational workforce that is committed to high culinary and lodging standards, and whose talents have been forged under his tutelage in spotlight of food and lodging critics.

“So, for the last negotiation for a rather large loan, 12 bankers sat at a table and someone mentioned the risk factor and if something happened to me.

The Inn was named the No. 1 restaurant in The Washington Post 2017 Fall Dining Guide.

In 2018, the Forbes Travel Guide recognized the Inn with two Five Star Awards, one for the restaurant and one for the hotel, for the 29th consecutive year.