Hard Rock International Inc. has announced a president to lead its hotel and casino operations in Bristol.

Allie Evangelista most recently served three years as a vice president and general manager for Penn National Gaming operations, including the past seven months at Hollywood Casino Perryville, in Maryland. Evangelista has “already hit the ground running and is busy assembling a talented team to operate the resort,” Hard Rock International Chief Operating Officer Jon Lucas said in a news release announcing the hire Tuesday.

Evangelista joined the gaming industry in 2006 as an assistant slot operations manager in Missouri, and worked her way up into vice president and managerial roles at casinos in Iowa and Ohio. Lucas called Evangelista an “American success story.”

The permanent casino, to come later, will be 90,000 square feet and cost about $400 million, creating 2,000 jobs once it is fully operational and 1,500 indirect jobs. It will have a 3,200-seat performance venue and 20,000-person capacity outdoor entertainment venue. Once operational, it is expected to bring $21 million in annual tax revenue for Bristol.

“I look forward to embracing the community in Bristol and working with the many partners who have been instrumental in supporting the project,” Evangelista said in a statement. 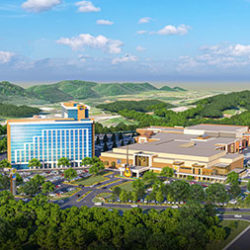 Temporary casino to open in second quarter of 2022