Cases and jobs have risen and fallen, and labor force has shrunk

The Hampton Roads region is slowly recovering from pandemic-spurred economic distress but has lost a large chunk of its workforce, according to Old Dominion University’s Dragas Center for Economic Analysis & Policy’s 2021 State of the Region Report released Tuesday.

Hampton Roads’ labor force and individual employment levels peaked in February 2020, only to be “dashed by the emergence of the COVID-19 pandemic,” according to the report. After some ups and downs through 2020, the region’s unemployment rate settled to 4.9% in June 2021, but more than 50,000 people left the region’s labor force. “A declining labor force is not a sign of a robust economic recovery,” wrote the report’s authors, led by Robert McNab, director of the Dragas Center.

Also, the region’s vaccination rate has lagged behind other parts of Virginia, particularly Northern Virginia, and COVID rates rose this year with the highly contagious delta variant.

The pandemic had disproportionate effects: While Black residents comprised 30% of the region’s population in 2019, they accounted for 33.8% of positive COVID-19 tests, 50.9% of hospitalizations and 44.6% of COVID-19 deaths. According to the study, vaccination rates among Black residents were lower than those of other races for the first eight months of the year, and Black workers were more likely to be in customer-facing jobs that carry more risk of exposure to the virus.

Although the unemployment rate in Hampton Roads declined from 12.8% in April 2020 to 4.9% last June, the decline is partly due to a reduction in the civilian labor force. From January to June, 5,969 people left the labor force.

Average monthly unemployment claims were 3.4 times higher in 2020 than in 2010 and 13.2 times higher than in 2019. At the peak of continued claims — 88,436 in May 2020 — more than one in 10 workers in Hampton Roads were receiving unemployment benefits. Continued claims are now falling, though they still remained above the pre-pandemic level in the first half of 2021.

Jobs in Hampton Roads have been slow to recover from early-pandemic cuts. In February 2020, Hampton Roads bottomed out with 5% fewer jobs than at the worst point following the Great Recession. While there were 33,000 fewer jobs in June 2021 than in June 2019, 84.4% (28,100) of the job losses were concentrated in three sectors: leisure and hospitality, education and health services, and local government. Job growth may pick up as travel and tourism and defense spending increase.

The report estimates that Department of Defense spending in Hampton Roads will reach almost $25 billion in 2021, but it warns that DOD spending might be cut as the department looks to newer weapons systems that are cheaper and quicker to build.

The full report is here. 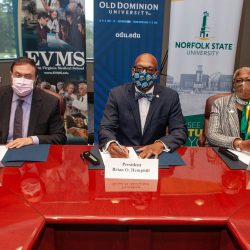