In the past four decades, Regent has changed more than its name

More than 8,900 students attend Regent University, including nearly 6,500 who can go to class without setting foot on the school’s 70-acre Virginia Beach campus.

They are among Regent’s growing cadre of students enrolled in more than 60 online degree programs. “We’re sensitive to the fact that the higher-education market has changed,” says Gerson Moreno-Riaño, Regent’s executive vice president for academic affairs and dean of its

College of Arts and Sciences. “There is a large market of students who can’t relocate or do not want to relocate to go to school but are looking for an excellent education delivered to them. Technology has transformed the way we live and breathe and do business.”

It’s also helped make Regent a leader in online education and has enhanced the school’s overall reputation. U.S. News & World Report recently gave Regent’s online academic programs high marks. The university’s online bachelor’s and graduate education programs were top-ranked in Virginia. The bachelor’s program also was ranked among the top 11 in the Southeast and the top 36 in the U.S. Meanwhile, Regent’s online non-MBA graduate business program was second in Virginia while its MBA program was fourth.

Began as CBN University
Those are remarkable accomplishments for a school not yet 40 years old. Founded by Christian broadcaster M.G. “Pat” Robertson, Regent was known as CBN University in 1978 when seven faculty members and 70 graduate students pursuing degrees in communications met in rented space. Today, students from all 50 states and 75 countries are enrolled in more than 95 graduate and undergraduate programs. There are more than 700 faculty members, in addition to 550 other employees. Regent’s 21,000 alumni include Emmy Award-winning actor Tony Hale, Tony-nominated Broadway producer Bruce Long, former U.S. Rep. Scott Rigell (R-2nd) and former Gov. Bob McDonnell (who now teaches at the university).

Those numbers continue to grow, thanks to Regent’s online presence, new academic programs and eight-week courses that allow students to enroll at times other than the traditional fall, spring and summer semesters. The addition of programs in cybersecurity, accounting, marketing and health care has led to 25 percent year-over-year enrollment increases for the past two years.

This year, Regent plans to launch graduate programs in cybersecurity, nursing and nursing administration, as well as graduate and undergraduate programs in health-care management and informatics.  A college of health sciences is on tap for the future. “We’re going to provide more intellectual capital with the development of our health-sciences and cybersecurity programs,” Moreno-Riaño says. “It’s going to be phenomenal — a win-win for our university and Hampton Roads.”

Regent has been offering bachelor’s programs only since 2005, but Moreno-Riaño says the school’s mission always included undergraduate education. “It was always a matter of timing,” he says, noting that undergraduate retention rates have risen from less than 40 percent to about 80 percent. “That’s amazing. It’s one of the most incredible success stories in American higher education.”

As the undergraduate population grows, the university is adding an athletic program, starting with track and field and cross-country teams competing in the National Christian Collegiate Athletic Association. Construction on an athletic center is expected to begin in the next few years.

All of which sets the stage for more growth, a prospect Regent is ready to tackle, Moreno-Riaño says. “We believe that we can continue to grow at a pace that places us as a very large university over the next five to 10 years while maintaining solid quality.”

First feature film
Graduate education, however, remains Regent’s top draw. Communications, the initial degree program, has evolved into the School of Communications and the Arts. The only Christian university in the world to offer a master’s degree in acting, Regent provides theater students opportunities to hone their craft in six school productions annually, as well as the Tidewater Stage, a professional summer theater. Film students create 30 to 100 short movies a year, with faculty selecting the top 10 to showcase in Regent’s 700-seat theater.

Last year, the school partnered with Home Theater Films to release its first full-length commercial feature movie, “In-Lawfully Yours,” which was filmed throughout Hampton Roads.  “We contributed to the economy of Hampton Roads and brought attention to the whole area with this feature film,” says Mitchell Land, the communications and arts dean. He adds that, while students have been honored in the Student Emmy and Student Academy Awards for short films, they relish the opportunity to assist in the production of a feature-length project.  “Having their names attached to a feature film is just ratcheting up their career opportunities.”

About 1,200 graduate students are enrolled in degree and nondegree programs in the School of Education, which recently began offering a master’s program in STEM education.  “We look at trends in the market and various areas of emphasis from the Virginia Department of Education,” Finn says. Regent also partners with school divisions to offer specific programs, including courses focusing on teaching gifted and talented learners and English as a second language.

Most of Regent’s online programs are offered through the School of Education. That’s largely driven by students seeking to align their educational goals with their professional and personal lives, Finn notes. “Within the past seven years, we’ve made an aggressive transition to online programs, which are more in demand by learners. We’ve been pioneers among our peers in that route of going almost exclusively online.” 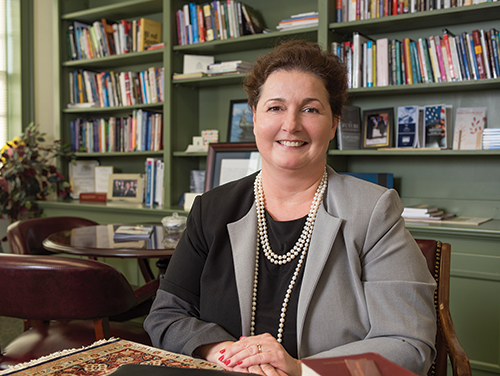 About 500 graduates of Regent’s School of Business and Leadership work in Hampton Roads. “We’re still considered a very young school, but our alumni are maturing in their various professions, and Regent is becoming increasingly known because of the quality education our students receive,” says Doris Gomez, the school’s dean.

A native of Austria, Gomez credits the school’s recent 35 percent year-over-year growth to its diverse faculty who hail from all over the world. Their perspective, she says, gives students insight into the business practices of various cultures, essential knowledge for working in an increasingly global economy. “It’s important our students learn to conduct business, lead and grow an organization across cultural differences.  Even if they don’t leave the U.S., globalization is at our doorstep,” she says.

With 1,200 students and growing, the school is considering adding programs, including a master’s in business analytics, which could begin this year. “Technology is ever increasing. There is so much data out there, but few organizations truly know how to make good use of data,” Gomez says. “This would be an incredible program that we must offer.”

Moot court victories
Having just celebrated its 30th anniversary, Regent’s law school still may be considered a fledgling, but it holds its own among more venerable institutions. For three years, the Princeton Review has ranked Regent law faculty in the top 10 of all U.S. law schools. Last year, the school’s Moot Court team came in second internationally at the Price Media Law Moot Court Competition Program in Oxford, England. The Moot Court program also placed fifth nationally in the University of Houston Law Center’s annual rankings.

Such accolades indicate Regent is training lawyers to exhibit the highest degree of ethics and professionalism, says Michael Hernandez, the school’s dean. “The world doesn’t need more lawyers, per se, but it needs more lawyers who are different and committed to the highest standards of the profession. We don’t want to just produce more lawyers but produce lawyers who will practice with integrity.”

The school also is investigating placing more courses online. “We want to make wise use of all the technology available but maintain and enhance the quality of the program,” Hernandez says. “Our goal is not to just mass produce education but to reach as many people as possible with quality programs.”