Richmond-based kaléo is in a good position to help lessen a very bad problem — the rising number of opioid overdose deaths in Virginia and around the country.

That’s because it has created a device that can be used by almost anyone to treat an overdose, which means potentially life-saving treatment can be delivered without waiting for emergency personnel who often arrive too late.

It’s called the Evzio, a slim, pocket-size device that carries two doses of naloxone, which temporarily counters the effect of opioids. The Evzio also gives audible instructions to users, telling them how to deliver the injection. It’s pretty simple: Remove the cap, press the device against the person’s outer thigh and press a button. Then immediately seek medical care for the victim.

Evzio was approved by the Food and Drug Administration in April 2014. Its median out-of-pocket cost is less than $20, says Dr. Eric Edwards, one of the company founders and its chief medical officer and vice president of research and development.

Kaléo’s product is, so far, the only FDA-approved device of its kind, and there is growing momentum nationwide to make access to naloxone easier. About a dozen states even allow it to be sold without a prescription, though Virginia is not yet among that group.

Virginia did, though, pass several laws this year dealing with overdose preventions, including one that allows pharmacists to dispense naloxone under more lenient rules, allowing family members and other individuals to possess and use naloxone to treat an overdose. That law came out of recommendations from a task force created last year by Gov. Terry McAuliffe to develop new laws and policies for reducing the number of unintentional overdoses and opioid abuse.

Opioids are widely used in prescription medications for pain relief because they work so well, Edwards says. Oxycodone, hydrocodone and fentanyl are among medications that contain opioids.

The problem is that this more effective and legal treatment comes with big risks. Even when patients follow instructions, the drug can interact with some medications, such as those prescribed for depression or anxiety, or with medicines used to treat conditions such as COPD, sleep apnea or asthma. 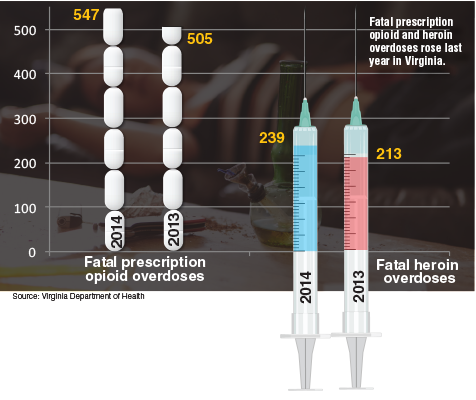 An opioid overdose often comes on quickly, and by the time emergency care arrives it can be too late. “The goal was: How do you bridge that gap and keep a patient breathing until the ambulance arrives? That was the value proposition” behind creating Evzio, Edwards says.

The number of overdose deaths has been on the rise in recent years. In 2014 prescription opioid deaths in Virginia rose to 547, up more than 8 percent from the previous year, according to the Department of Health. Fatal heroin overdoses rose 12 percent last year from 2013, to 239. The problem is getting worse: In the first six months of this year, there were 126 heroin overdose deaths, a 25 percent increase over the same period last year.

In September kaléo and a handful of medical groups focused on pain management launched a public awareness campaign called “America Starts Talking.” The goal is to raise awareness about the risks of opioid overdoses even from prescription medications.

Many in the medical community have been rallying for several years in support of putting devices like the Evzio in the hands of lay people. Earlier this year the American Society of Addiction Medicine (ASAM) issued practice guidelines that call for providing naloxone to family members, significant others, firefighters and police officers who are trying to help an opioid overdose victim.

Dr. Margaret Jarvis, who helped develop those guidelines for ASAM, says the stigma around drug addiction has slowed the progress of treatment options. “There’s still a huge chunk of the population that does not understand addiction as a disease, and so they don’t understand any need for medication,” she says.

The problem has grown so quickly that many health-care providers are trying to respond without necessarily being sure they’re doing it correctly, Jarvis says. The new guidelines are intended to help physicians and others figure out if they’re doing the right thing. Naloxone has one big advantage in terms of safety — if it is given to a person accidently, someone not suffering an opioid overdose, it has no effect. “There’s just really kind of no downside to this,” she says.

Kaléo’s beginning is partly a personal story. Eric Edwards and his twin brother, Evan, the company’s vice president for product development and industrialization, grew up with life-threatening food allergies. They developed a new way to deliver epinephrine, the drug used to treat many allergic reactions. That work led to the creation of the company.

Kaléo’s near-term plans are to stay privately held and in Richmond. The Edwards brothers are from the Richmond area, and Eric is a graduate of Virginia Commonwealth University’s School of Medicine. “We’re building this right here in Richmond,” he says. “Since we started this company we’ve been able to attract world-class talent.”

Virginia to use federal grant to boost health-care enrollment