Next step is sale of land from county to GreenCity developers

The Henrico County Board of Supervisors this week unanimously approved rezoning the 204-acre former Best Products headquarters campus into the $2.3 billion GreenCity project, a major mixed-used development that will feature a 17,000-seat arena.

GreenCity, which was proposed in December 2020, is also expected to include two hotels with 600 rooms, about 2.2 million square feet of office space, 280,000 square feet of retail space, 2,100 residential units and green space and plazas. Michael Hallmark with Capital City Partners LLC and Susan Eastridge, the president and CEO of Eastridge, are leading the project for developer GreenCity Partners LLC.

Anthony Romanello, the executive director of the county’s economic development authority put the project in context of the impact it will have on the region’s economy: Henrico’s gross county product is $26 billion annually and GreenCity’s impact is projected to be as much as $1.4 billion per annually. “It’s really going to be phenomenal,” he said.

Discussing the arena during the Oct. 12 Henrico Board of Supervisors meeting, attorney Andy Condlin with Richmond-based law firm Roth Jackson Gibbons Condlin PLC spoke on behalf of GreenCity Partners LLC, telling supervisors that the project’s centerpiece venue will be “a much more intimate arena” and “artists will want to come here.” He also noted the growing movement among performers to only play in arenas that have set sustainability standards and have made climate pledges, so he expects this arena to be sought-after venue for such artists. An operator for the arena has not been named yet.

Over the next four to six months, the developers will create a community development authority with the county that will serve as the vehicle for financing the arena, Eastridge told Virginia Business. The developers will also buy the property from the county and work on financing the first phase of development in that time period. The price of the property is about $6.2 million, according to Anthony Romanello, Henrico’s economic development director.

The first phase will be an “adaptive reuse” of the existing 300,000-square-foot Best Products building, rather than increasing the project’s carbon footprint with all-new construction, Hallmark said. The developers hope to start construction in the second half of 2022 and complete it by the end of 2023, Eastridge said.

In the second phase, GreenCity Partners LLC will build the 17,000-seat arena and most of the retail and hotel space, which they hope to start in 2023 and complete in 2024 or 2025. During the meeting, the developers noted that the whole project would not be done until about 2033 or 2034.

“What’s most exciting about this project is there’s just nothing like it,” Romanello said. “And to have a fully sustainable community that has this kind of an economic impact, it will be unique. And what we’re really thinking about from an economic development standpoint is [that] lots of corporations are committed to sustainability and are really working hard to reduce their carbon footprint or eliminate their carbon footprint. … You may not be in a position to build a fully sustainable building, but now what this will allow is folks who are committed to sustainability to lease space and a facility that helps them live out that commitment.

“We believe that it’ll be really attractive for corporate office headquarters, particularly again for companies that have that strong feeling or strong sensitivity to sustainability,” he added. “And so that’s where I think the sustainability element is one of the differentiators.”

GreenCity’s developers are conducting a feasibility study on residential units to see how quickly they can build them without creating competition between them. They’re also studying the proposed park area, which will run about 1.5 miles from Parham Road to Interstate 295, to see if it can be developed at one time or should be built in phases, Eastridge said.

During the Oct. 12 supervisors meeting, Nelsen Funeral Home CEO Bernie Henderson spoke in support of the project on behalf of ChamberRVA’s Henrico County Government Affairs Committee: “Our committee has closely monitored the GreenCity project from its initial announcement to the present time and we find that it is well-conceived and that it has enormous beneficial potential specifically for Henrico, as well as for the greater Richmond metropolitan community. We proudly offer enthusiastic support for it.” 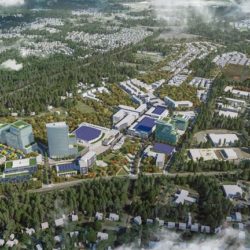