Catherine Badalamente will be the next president and CEO of Arlington-based Graham Holdings Co.’s local media division, Graham Media Group. Her hiring follows current president and CEO Emily L. Barr’s Tuesday announcement that she would retire later this year.

Graham Holdings Co. is the family company of the late Katharine Graham, who was the former publisher and owner of The Washington Post. Along with Graham Media Group, its current holdings include online magazine Slate, digital marketing company Code3 (formerly SocialCode LLC) and higher education company Kaplan Inc.

“I could not be more pleased to appoint Catherine the new CEO of Graham Media Group,” Graham Holdings Co. CEO Timothy J. O’Shaughnessy said in a statement. “Catherine has helped keep GMG ahead of the curve in a rapidly changing industry. … As the next generation of Graham Media Group unfolds, we have a next generation leader to help steer the ship.”

Badalamente joined Graham Media Group — formerly Post-Newsweek Stations — in 2000. She has served in various executive leadership roles, most recently as vice president and chief innovation officer, and has spearheaded the organization’s digital work since 2009.

Badalamente serves as chair and treasurer of the Local Media Association Board of Directors and is immediate past chair of the National Association of Broadcasters Digital Officer Committee.

She holds a bachelor’s degree in communications from John Carroll University.

Barr joined Graham Media Group in 2012 and took the organization from a broadcast-based model to seven local media hubs.

“Emily’s leadership has been critical to the company’s success. Graham Media Group has continued its tenure as a best-in-class operator, and Emily has led the organization to receive numerous awards and achieve record earnings,” O’Shaughnessy said in a statement.

WSJ reports Axios is eyeing merger with the Athletic

Arlington news website would go public through SPAC, according to news reports 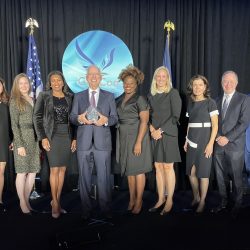 AFS won the award in the over $300M in revenue category