Charlottesville-based real estate investment company Castle Development Partners LLC purchased the property from The Colonial Williamsburg Foundation and plans to raze the property and redevelop it into a 162-unit apartment community. Built in 1964, the hotel closed permanently in February 2019.

At the time of its closure, The Colonial Williamsburg Foundation no longer considered the hotel a “strategic asset related to its core educational mission,” according to reports. In March, the foundation offered The Governor’s Inn as a potential emergency housing and care facility to assist city and public health officials during the cornavirus pandemic’s early stages.

“We are very pleased with Castle’s plans for the new development and look forward to welcoming many new neighbors to downtown Williamsburg,” Jeffrey A. Duncan, The Colonial Williamsburg Foundation’s vice president of real estate said in a statement.

Located at 506 N. Henry Street in downtown Williamsburg, the property is located less than 1 mile from Merchants Square and the Resort Historic District. The new apartment complex will include one- and two-bedroom apartments that will match the neo-Georgian style of the surrounding district, according to Cushman & Wakefield | Thalhimer. 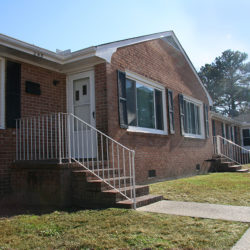