Department of General Services to take down Monument Ave. statue "as soon as possible"

“I am directing the Department of General Services to remove the statue of Robert E. Lee as soon as possible,” Gov. Ralph Northam declared at a news conference Thursday, flanked by a Lee descendant, the Rev. Robert W. Lee IV, and Richmond Mayor Levar Stoney.

“It was wrong then, and it is wrong now, so we are taking it down,” the governor continued.

On Wednesday, Stoney announced he would submit an ordinance July 1 to remove the other Confederate monuments along Richmond’s Monument Avenue. The General Assembly passed a bill this year allowing localities to take down Confederate statues.

Northam said the 12-ton, six-story, 130-year-old statue of the Confederate general will be removed and put into storage, and community members will have an opportunity to discuss where it will ultimately go.

Richmond — and the nation — was built on “high ideals for equality,” Northam said, invoking Patrick Henry’s famous words delivered at St. John’s Church in Church Hill, “Give me liberty, or give me death.”

“Those inspiring words and high ideals did not apply to everyone: not then and not now,” Northam said. Down the hill from St. John’s Church was a slave-trading market before the American Civil War, “Americans buying and selling other Americans. Black oppression has always existed in this country, just in different forms.”

The monument, which is on state-owned land, unlike other Confederate statues that sit on land owned by localities, was installed in May 1890 as a crowd of 150,000 people, many waving Confederate flags, watched the unveiling of the monument in what was then a tobacco field.

Northam depicted it as a “glorification of the Lost Cause” and a symbol of oppression.

“As the statues went up, so did new laws. It was all part of the same campaign,” the governor said, including laws that caused the number of black men registered to vote in Virginia to fall from 100,000 to 10,000, and laws directing that Confederate statues could not be taken down. “They needed the statues to stay forever to keep the system in place.”

Institutional racism exists and affects everyone, the governor added, “even if you can’t see it. The eyes can’t see what the mind doesn’t know.” He said that although some people will be angry about the removal of the monument, “I believe in a Virginia that studies its past in an honest way. In Virginia, we no longer preach a false version of history. No one believes that any longer.”

The announcement — which comes more than a year after a racist photo from Northam’s medical school yearbook was publicized — is part of a year of significant changes in the commonwealth. On July 1, laws take effect that decriminalize marijuana possession, establish Election Day as a state holiday, and remove requirements to show a photo ID at polling places.

“There are two pandemics in this country: COVID-19 and racism,” Stoney said. “Both are lethal, especially for black and brown people. We need to show that black and brown lives matter. This is our moral duty.”

Lee, who spoke earlier this year during the General Assembly session to support a bill ending the state’s Lee-Jackson Day holiday, said on behalf of his family: “We support you, and we wholeheartedly commend this act.”

In a prepared statement, DGS said it is “taking steps to carry out this order as soon as possible. The size, scale and location of the monument will require careful planning, which is currently underway, to ensure it is completed safely and effectively.” Spokeswoman Dena Potter added that the department does not yet have details on cost and timeline or storage of the monument, “as we are just beginning planning for the removal.”

Northern Virginia and Richmond will remain at Phase One 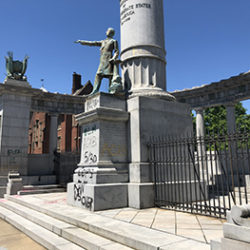