While lamenting the upcoming retirements of U.S. Reps. Frank Wolf (R-10th District) and Jim Moran (D-8th), Democratic Gov. Terry McAuliffe told WTOP radio listeners in July he also was “heartsick” that House Majority Leader Eric Cantor (R-7th District), once one of the most influential voices on Capitol Hill, had lost his job.

This summer, the commonwealth faced a $2.4 billion budget shortfall through fiscal year 2016, the product of a precipitous, drop in federal spending since 2011 and the loss of more than 150,000 private-sector jobs supported by that money, according to McAuliffe’s budget report to the General Assembly in mid-August.

His anguish at the prospect of losing even more federal spending without the help of three senior Virginia lawmakers is understandable, given the decline in the commonwealth’s finances.

Cantor, who had served in Congress since 2001, suffered a stunning, double-digit loss in the June 10 Republican primary.  The victor was Dave Brat, a libertarian economics professor at Randolph-Macon College who is a growing favorite of many tea-party conservatives in Virginia and across the nation.

Brat’s victory spotlights a growing rift in the Republican Party over the government’s relationship with big business.  That widening gap, political analysts say, could prevent the party from reaching a consensus on critical issues, even if the GOP succeeds in gaining control of both houses of Congress in November. 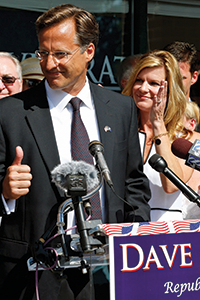 Starting with the Affordable Care Act (ACA), Brat says he wants to eliminate federal programs that promote any business or industry over any other. Brat, like other critics of the ACA’s mandate that all Americans over the age of 21 have health insurance, says that component of the law constitutes a massive, undeserved gift by the Obama administration to health insurance companies. While Occupy Wall Street progressives deride congressional favoritism as “corporate welfare,” Brat and other libertarian economists call it “crony-capitalism.”

He also opposes renewal of the U.S. Export-Import Bank, a pet project of Cantor’s that provides subsidized, federally guaranteed loans to U.S. companies, many of which Brat and other critics say already are profitable enough to borrow all they need quite affordably from private banks anywhere in the country.

Renewed funding for these foreign trade loans, used by 113 Virginia companies since 2007 according to the Ex-Im Bank’s website, is supported by the Virginia Chamber of Commerce.  In late July the commonwealth’s two U.S. Senators, Tim Kaine and Mark Warner, introduced legislation to increase the agency’s lending charter to $160 billion from $140 billion before it was scheduled to expire on Sept. 30.

“Special firms get special treatment, and they get special treatment because they can afford lobbyists and high-priced attorneys up on K Street [in Washington],” complains Brat. “The Republican Creed that I’m running on has six principles, and the second one is equal treatment under the law. I take that seriously. You cannot be treating citizens of your country on an unfair basis, discriminating against your own citizens based on their access to power in Washington, D.C.”

Voter discontent
Brat’s primary victory is one of the visible examples of the growing discontent among conservative Republican voters with the party’s leadership. In the most recent Republican primary season, the campaigns of “establishment” and tea-party candidates spent $135 million fighting each other, according to an analysis of political contributions by Bloomberg News.

If the GOP regains control of the U.S. Senate from Democrats and retains control of the House of Representatives, as it is widely expected to do, the growing rift between the party’s two wings might continue, rather than break, the current gridlock on Capitol Hill.

Analyst Stan Collender, writing on the Forbes magazine website, predicts that an ideological split between more moderate Republicans in the Senate and a much more conservative House will continue to plague federal budget negotiations even if the party controls both chambers.

He predicts that the first serious sign of discord will come during the winter when the party’s factions rehash an old issue, whether defunding the Affordable Care Act should be linked to raising the U.S. government’s debt ceiling, or borrowing limit, by the March 15 deadline.

“The standoff could well last for months and require multiple fights before it’s settled,” writes Collender. “Expect Wall Street to be unhappy, interest rates to rise because of the uncertainty and another possible downgrade of U.S. debt.”

On the other hand, Stephen Farns­worth, a University of Mary Washington (UMW) political science professor and analyst, argues that a divided Congress (even when one party controls both chambers) “is not necessarily bad for business.” He says many issues important to business, including federal regulations, “are unlikely to be altered in an environment like this.”

‘Jobs are a priority’
Virginia’s business leaders disagree with suggestions that the Republican majority in the General Assembly is becoming gradually more divided along the same ideological lines seen in Congress.

Barry DuVal, president of the Virginia Chamber of Commerce, points to the numerous laws benefiting companies passed in the 2014 session — as well as this past summer’s announcement that a Chinese company, Shandong Tranlin Paper Co. Ltd., will build a $2 billion pulp plant in Chesterfield County. It’s expected to employ 2,000 workers by 2020.

“I think that jobs are a priority for both political parties, members of both House and Senate … think if we can align our resources like we’ve done, Virginia will not fall into the state of Washington paralysis,” he says.
Mary Huffard Kegley, director of government relations at the Virginia Retail Federation, adds that, in her experience, General Assembly lawmakers from both parties do all they can to accommodate business groups. Many even give lobbyists from different industries the job of working in a group to craft a piece of legislation that is acceptable to all economic stakeholders before it gets introduced to the floor, she says.

“Compromise is not a dirty word in Richmond,” she says.

Nevertheless, UMW analyst Farnsworth believes that Virginia lawmakers’ tradition of compromise is eroding. He points to the protracted battle over increased state funding for Virginia’s aged transportation infrastructure that lasted through the tenures of two previous governors (Kaine and Bob McDonnell) along with the Medicaid funding donnybrook that marred the passage of McAuliffe’s first budget this past session. Both battles are clear evidence of what Farnsworth calls “the Washingtonization” of Virginia state politics.

He says more and more Virginia Republicans fear that any votes they cast supporting laws endorsed by Virginia business organizations but opposed by anti-tax, tea-party forces could mean the end of their political careers. Last year, two longtime GOP legislators who backed the 2013 comprehensive transportation funding bill passed by the General Assembly in 2013 — state Delegates Joe. T. May (Loudoun) and Beverly Sherwood (Frederick) — were defeated in a party primary months later.

“As difficult it was for the governor in the last session, all indications are it will be more difficult for him next year,” predicts Farnsworth. “You have incumbent lawmakers worried about tea-party challengers and as a result there’s not likely to be much compromise. By the same token, McAuliffe’s failure to charm enough Republicans to get Medicaid expansion through and his scorched-earth policies … do not indicate much cooperation next year … If you like gridlock, there’ll be plenty more in 2015 than in 2014 … I think that applies to both Richmond and Washington.”