Jobs go unfilled because of a shortage of skilled workers. 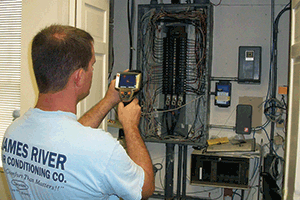 When Hugh Joyce advertises to fill a warehouse position he receives at least 100 applications. But when he puts out the word that he is looking for a well-trained heating, ventilation and air conditioning technician, no one responds. “There is a significant shortage of and a tremendous need for these skilled HVAC workers,” says Joyce, founder of James River Air Conditioning in Richmond.

One of the reasons for the shortage is that many young people aren’t interested in pursuing technical positions. “That’s a problem,” says Joyce. “Everyone is saying ‘go to college’ so it’s not in vogue to become a technician. That mindset makes it difficult.”

The heating and air conditioning industry isn’t the only one in need of midlevel skilled workers, those who have more than a high school diploma but less than a four-year college degree. Dominion Virginia Power, for example, finds it difficult to recruit linemen to fill open positions.

Each year hundreds of positions go unfilled in industries that range from health care and shipbuilding to truck driving and manufacturing. The shortages are being fueled by two major trends: the retirement of trained workers and job seekers that are not skilled in midlevel technical trades.

According to data from Economic Modeling Specialists International, a CareerBuilder company that works with labor market data, in 2012 over 50 percent of Virginians employed in skilled trades were 45 or older. “About 21 percent of our workforce is qualified for retirement in Virginia,” says Brett Vassey, president and CEO of the Virginia Manufacturers Association. “All industries are pretty much in the same boat.”

The health-care industry also is facing shortages because of growth and retirement. Registered nurses, for instance, are near the top of the list of occupations in demand. Chris Chmura, president of Chmura Economics & Analytics in Richmond, says the need for qualified nurses in Virginia  is on the rise. “There will be 1,500 needed because of growth and 1,100 because of nurses retiring to equal 2,600 per year for the next 10 years,” she says.

In addition to losing workers to retirement, many industries such as manufacturing have jobs that require midlevel workers trained in the latest technology. “The way we make products is different in the last decade because of technology,” Vassey says. “You can’t work with a basic high school diploma today. We need middle-level skills. Sixty-five percent of our occupational demand over the next five years are positions that require middle-level skills.”

Also, Vassey believes there are some misconceptions about jobs in the industry that help fuel the shortage of qualified workers. “People misinterpret manufacturing to be a picture from the 1920s,” he says. “Finally now, young people are starting to see that manufacturing is sexy again.”

In a recent survey by the National Association of Manufacturers’ Manufacturing Institute and Deloitte, 56 percent of industry executives surveyed said they expect the shortage of skilled workers to “grow worse in the next three to five years.” “In this highly competitive global market, our manufacturers’ business success is tied directly to their ability to innovate and the single most important factor in their innovation capacity is a skilled workforce,” says Jennifer McNelly, the organization’s president.

The Virginia Manufacturers Association is working to fill midlevel skills jobs by making sure that job seekers are ready to step into these positions. “That is why we built the Manufacturing Skills Institute,” says Vassey. The institute, sponsored by the VMA and ECPI University, provides training programs for careers in advanced manufacturing.

Jobs that require technical training are “desirable career paths” that can lead to prosperity, says Barry DuVal, president of the Virginia Chamber of Commerce. Technical education, he adds, “is a high priority for Virginia.”

The Virginia Chamber is working with local and regional chambers along with 300 organizations across the state to develop Blueprint Virginia, a state economic business plan. The strategic plan will be presented to the governor-elect in November as a recommendation. One of its priorities is a competent workforce. “We want to link basic education from kindergarten through grade 12 with workforce preparation,” says DuVal. “And we want to increase the emphasis on skills and technical training at the high school and post-high-school level.”

A recent study on workforce challenges conducted by Stephen Fuller, director of the Center for Regional Analysis at George Mason University, points out that one of the state’s major challenges in the next 10 years is “assuring a sufficient supply of qualified workers to fill the available jobs that the Virginia economy has the potential to generate.”

Education is one way to meet that need. One of the state’s big educational pushes is STEM-H training for jobs in science, technology, engineering, math and health care. “Virginia is one of the leading states for STEM-H jobs,” says Virginia’s Secretary of Education Laura Fornash, pointing to careers in health care.

The emphasis on STEM goes hand-in-hand with the Top Jobs legislation signed by Gov. Bob McDonnell in 2011. The legislation creates a pathway to award 100,000 more college degrees by 2025. Early data shows that an additional 22,000 students have enrolled in public institutions since the legislation was passed. “Our job is to prepare the workforce for the jobs that are out there, and industry tells us what it needs,” says Robert Vaughn, staff director for the Appropriations Committee in the Virginia House of Delegates. “This is an evolving process.”

In addition to associate degrees, community colleges in the state offer more than 400 different post-secondary credentials, from a commercial driver’s license to an electrician’s license. “Community colleges are experts in designing and delivering training,” says Craig Herndon, VCCS’s vice chancellor for workforce development.

Like other manufacturing companies, Richmond-based MeadWestvaco recognizes the gap in workforce preparedness in the commonwealth and is working to close it. The global packaging company has large paperboard and chemical manufacturing facilities in Covington that employ approximately 1,000 workers requiring technical skills and training.

“We think investing in education in science, technology, engineering and math can play a major role in closing the gap,” says Linda V. Schreiner, senior vice president. “We are partnering with community colleges and veterans groups to fill our pipeline with candidates with STEM skills. We have to look at ways to continue to attract people who have technical training.”